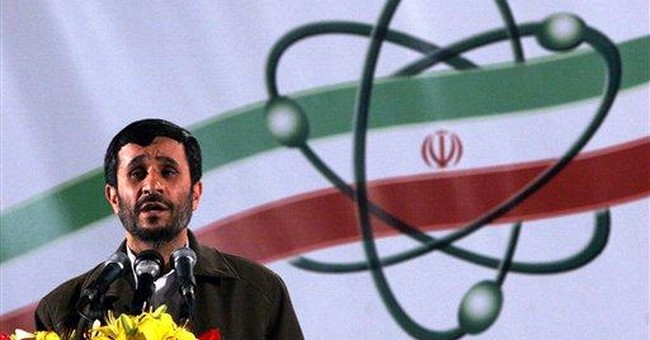 Washington, D.C. -- Mahmoud Ahmadinejad, the public face of Iran's radical Islamic theocracy, has a knack for making news. His recently released "guests" -- 15 British military hostages -- had hardly traded their Tehran tailor togs for military uniforms before the tyrant was once again prancing on the world stage. This week he chose Iran's Natanz nuclear enrichment facility as a backdrop to proclaim: "With great honor, I declare that as of today our dear country has joined the nuclear club of nations and can produce nuclear fuel on an industrial scale." Thumbing his nose at U.N. demands that Iran cease uranium enrichment or face sanctions, he announced that Iranian engineers had begun operating 3,000 gas centrifuges to enrich uranium. If it's true, we're all in serious trouble. But even more troubling: We don't know, and worse, no one seems to care.

Has Iran taken a major step to build nuclear weapons? Is the outlaw regime in Tehran closer to constructing a functional device? These would seem to be important questions. Yet, the truth of the Iranian claim that they are producing quantities of enriched uranium is shrouded in secrecy -- and seemingly willful ignorance.

Since Ahmadinejad's April 9 nuclear announcement, the masters of our mainstream media have plied us with many more titillating stories about the paternity of a dead Playboy pin-up's baby and the racist comments of a radio shock jock than they have with what we know -- or don't know -- about the Iranian nuclear threat. European and U.S. government officials responded to the blatant provocation with the ostrich approach: If we ignore it, maybe it will go away.

The British, German, Italian, Dutch and French governments declined any speculation about the Iranian claim. Mohamed ElBaradei, head of the International Atomic Energy Agency, the United Nations' toothless "nuclear proliferation watchdog," noted that he had dispatched two IAEA inspectors just this week to the Natanz site while he jetted off to visit "concerned" Persian Gulf states. He and Saudi Foreign Minister Prince Saud Al-Faisal were said to have "reviewed issues of mutual interest."

Russian reporters -- perhaps more aware of their country's role as Iran's principal atomic benefactor -- were apparently more persistent. Moscow's Foreign Minister Sergei Lavrov was provoked enough to say, "We haven't got a confirmation yet that they have actually begun uranium enrichment at the new cascade of centrifuges." He added, "We have heard the Iranian president's statement and adopted a serious attitude to what is going on in relation to the Iranian nuclear program. But we would like to proceed from facts, not from emotional political gestures."

In Washington, Republicans and Democrats were too busy with their own emotional political gestures to engage in Iranian nuclear deterrence. The president and his minority party busied themselves with the future of an embattled attorney general and stem cell research. House and Senate Democrats devoted their week to setting a surrender date for Iraq -- and how to unseat said attorney general. Only House Speaker Nancy Pelosi, recently returned from the first lap of her Rogue Regime Victory Tour and a disastrous seance with Bashir Assad in Syria, seems ready to deal with Iranian weapons of mass destruction.

On Wednesday, Ali Larijani, Iran's chief nuclear negotiator, announced that Tehran would be "open to discussing" its nuclear program, noting that "Any proposal is acceptable should it be effective for reaching compromise, understanding and removal of concerns of both sides." Immediately, Pelosi and Rep. Tom Lantos, D-Calif., raced to the microphones to declare they were prepared to jump back into the heady arena of shuttle diplomacy. "I would be ready to get on a plane tomorrow morning," Lantos said. Pelosi, flexing her trademark tight smile, observed, "a person of Lantos' stature and personal experience is saying that -- even as a Holocaust survivor and even recognizing the outrageous statements of the president of Iran -- it's important to have dialogue."

Those are the same sentiments that prompted Prime Minister Neville Chamberlain to rush off to Munich in September 1938 and return with the promise of "peace for our time." Rather than hurrying off to more talks with the deceptive and dangerous regime in Tehran, we must first discern how advanced their nuclear weapons program really is, and develop a coherent strategy for confronting this clear and present danger.

Iran's nukes are at the heart of this week's "War Stories" special, "Secrets of the Bomb: Manhattan Project to Tehran." In preparing for the broadcast, I asked former weapons inspector Dr. David Kay, "Should we be worried about a nuclear Iran?"

His answer is instructive: "We should be worried about it for two reasons. First, they're on a course that will in fact, at some point, produce nuclear weapons. Secondly, they have a regime which does not appear to play by the normal rules of stable international society. They speak of destruction, of chaos, wiping Israel off the face of the earth. They also are the leading state sponsor of terrorism. So Iran is not exactly what I view as a secure holder of the nuclear genie."

Failing to act on a warning that clear is tantamount to playing nuclear roulette with an Iranian finger on the trigger.