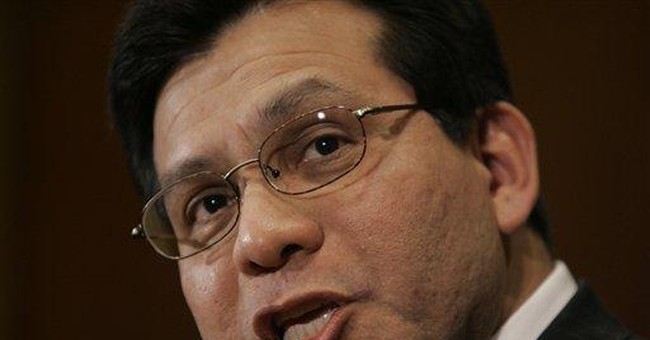 COLORADO SPRINGS, Colo. -- "If the new majority in Congress wants to tie the Bush administration in knots with investigations and a flurry of subpoenas, they can surely do so."

That's what I wrote in this column on Nov. 10, 2006, just days after Democrats captured control of both houses of Congress. It wasn't prophecy -- just experience. As a staff member for President Ronald Reagan's National Security Council, I recall what it was like when congressional liberals decided to do all in their power to bring down a Republican president. Their goal wasn't "legislative oversight" or "Congressional inquiry" but to undermine a conservative commander-in-chief and distract executive branch personnel from carrying out presidential directives to prevent the spread of communism in Central America.

Out here in this Rocky Mountain home to the U.S. Air Force Academy and thousands of Afghanistan/Iraq War veterans at Fort Carson, most of those serving today are too young to remember the "Evil Empire" or what it was like for Reagan to contend with a hostile, liberal-dominated Congress. But that doesn't stop them from wondering, "What the devil is going on in Washington -- and you guys in the media? Doesn't anybody back there realize we're fighting a war? "

Those are the words of a young officer as we were making arrangements to shoot interviews here for an upcoming episode of FOX News' "War Stories." I didn't have the heart to tell this brave warrior that he's an eyewitness to American politics and press at their worst -- all done to damage George W. Bush and provide partisan advantage to his opponents. The war in which this officer served is apparently of little consequence to the majority on Capitol Hill -- except as a means of gaining leverage in the 2008 elections. For the masters of the mainstream media, bad news from the battlefield is front page in the papers and the lead story for any broadcast. Now that the tactical situation is improving, there is little or no news from Iraq.

Back in Washington, congressional leaders and their lackeys in the Fourth Estate are salivating over the prospect of subpoenas flying to compel presidential aides to testify before committees on Capitol Hill about the Bush administration's decision to fire eight federal attorneys. Set aside that this is every president's prerogative -- or the fact that Bill Clinton fired all 93 U.S. attorneys with nary a peep from the potentates in the press.

Hyperventilated rhetoric is routine on Capitol Hill, but describing a president's exercise of executive privilege as a "constitutional crisis" is inane. Yet Democrat National Committee Chairman Howard Dean describes the imbroglio as "George Bush's Watergate." It's all hogwash -- but that won't stop attention-starved solons like Charles Schumer, D-N.Y., from rushing to any open microphone with his latest take on the "standoff." The masters of the media are no better. For a week now, White House spokesman Tony Snow has been peppered with questions about whose "head will roll." The feeding frenzy is enough to make one long for more coverage of Anna Nicole Smith.

All this has worked as intended by those who despise this president. The commander-in-chief's attention has been diverted from more important matters. Congressional Democrats have an issue to yell and howl about. And those who write headlines have an excuse not to report real news about the war.

On March 19, the day Operation Iraqi Freedom began four years ago, there were all kinds of stories that should have been reported about the war in Iraq. The mainstream media could have done stories about Al Qaeda in Iraq (AQI) resorting to the use of chlorine gas attacks and child suicide bombers. They could have covered Coalition troops capturing AQI paymaster "Abu Qatada the Palestinian." A story about Iraqi Sunnis and Shiites working together in Al Anbar province would have been both timely and appropriate. Instead, most of the media aped NBC's "Today" host Matt Lauer, who dolefully opined: "As the war enters its fifth year America is shell-shocked, the casualties staggering, the price tag in the hundreds of billions. Is the war worth it?"

Following the gloom-and-doom lead of those who decide what's news, congressional Democrats renewed efforts to assure failure by setting a deadline for withdrawing U.S. troops from Iraq. Language requiring just that has been inserted in the supplemental spending bill -- legislation intended to equip, train and pay those fighting the war. To ensure passage, Democrat leaders larded up the emergency spending measure with $21 billion in pork, prompting one wag to describe the bill as "a sausage wrapped in Old Glory."

If the sacrifices thus far weren't so severe, and the consequences of failure weren't so serious, all this would be farce. Senate Minority Leader Mitch McConnell, R-Ky., correctly observed, "this legislation is dangerous. It is constitutionally dubious. And it would authorize a scattered band of U.S. senators to tie the hands of the commander-in-chief at a moment of decisive importance in the fight against terrorism in Iraq."

He's right. And he was also correct to hold them accountable. "It is increasingly clear," he explained, "that the only principle guiding our colleagues on the other side is this: If the president proposed it, we oppose it. This is a bad principle in good times. It's outrageous at a time of war."