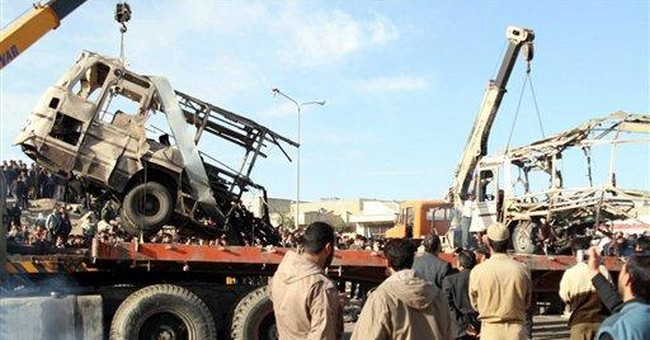 SPOTSYLVANIA, Va. -- He was an American hero. On his second tour of duty in Iraq, he had already served in the Western Pacific and a prior combat tour in Afghanistan. On Friday afternoon, Feb. 16, when Sgt. Joshua Frazier, USMC, was laid to rest in the soil of his native Virginia, his comrades in arms from the 1st Battalion, 6th Marines were fighting terrorists on the mean streets of Ramadi, in Iraq's bloody Al Anbar Province. As Sgt. Frazier's grieving mother was being presented with a carefully folded American flag, the Congress of the United States was debating a meaningless "non-binding resolution" attacking the commander in chief.

Heroes aren't athletes who set new sports records or Hollywood actors who make "daring" films or politicians who make bold promises. Heroes are people who place themselves at risk for the benefit of others. Joshua Frazier was certainly such a man. Unfortunately, there are far too few members of Congress who fit the definition.

At Joshua's funeral, I gave his parents photographs of their son that had been taken a few weeks ago while I was embedded with his unit in Iraq. We had just returned from a patrol to a newly re-opened school where little Iraqi girls were being taught arithmetic. Standing around us in the photo are the Sunni police officers and Shia soldiers who had accompanied us on the mission. Sweat stains from his 40-pound flak jacket are still evident on his uniform and he is smiling through exhaustion into the lens. He and his squad of Marines had been up for more than 24 hours chasing down an enemy sniper. His is one of more than two dozen Army, Marine, Navy, Air Force and Coast Guard units whose tours will be extended in Iraq in order to increase U.S. troop levels by 21,500. These are the young Americans who will bear the brunt of what Congress is doing.

Sgt. Frazier is one of more than 2,500 U.S. military personnel killed in action in Iraq. Speaker Nancy Pelosi claims the resolution being debated by the House of Representatives is a measure that "will continue to support and protect" U.S. military personnel. Yet, she also says it shows "Congress disapproves of the decision of President George W. Bush announced on Jan. 10, 2007, to deploy more than 20,000 additional United States combat troops to Iraq." How this does anything but damage U.S. and Iraqi morale and embolden America's adversaries is beyond comprehension.

"The American people have lost faith in President Bush's course of action in Iraq," Pelosi said Tuesday as the resolution was introduced. She said the president's plan "is based on the judgment that the way out of Iraq lies in sending more troops in," adding, "our experience has proven just the opposite."

At the risk of pointing out the obvious, "our experience," in Pelosi's words, has proven that pulling U.S. forces out before the war is won is a formula for disaster. In Korea, the decision to withdraw U.N. troops to the 38th parallel resulted in stalemate and today's despotic, nuclear-armed regime in Pyongyang. In Vietnam, the congressional cut-off of funds in December 1974 precipitated the North Vietnamese communist takeover of the entire country less than five months later. The combined losses in both wars -- more than 108,000 Americans killed in action -- should be an object lesson for this Congress. Pulling out, holding back, withdrawing support, "de-funding" the war -- whatever it's called -- is tantamount to squandering lives.

Is that where this Congress is heading? Are the lives of courageous young American volunteers like Joshua Frazier worth so little to our Congress that they would ignore our peril for perverse personal political profit?

If the morale of America's soldiers, sailors, airmen, Guardsmen and Marines doesn't have meaning to our legislators, then perhaps they should look at what America's enemies are doing. While Congress debates hollow, but ultimately damaging legislation, there is new assertiveness in Iran -- on everything from acquiring nuclear arms to supplying terror cells in Iraq with advanced weaponry. Tehran's radical Islamic theocracy headed by Grand Ayatollah Khamenei doesn't have to worry about "resolutions of non-support," but they are very adept at measuring American ambivalence and uncertainty.

This week's "show and tell" of captured Iranian sniper rifles, surface-to-air missiles, mortar rounds, sophisticated "explosively formed penetrators" and evidence of Iranian complicity in killing more than 170 Americans elicited nary a peep from the new Congressional leadership. They were more concerned with their pet resolution -- and getting Pelosi a bigger military airplane for her commute between Washington and San Francisco. That's a telling signal to Tehran that our Congress is backing away from protecting our vital interests and our troops.

Nero fiddled as Rome burned. Today, Congress diddles as Americans die. Tomorrow, we may all pay the price.