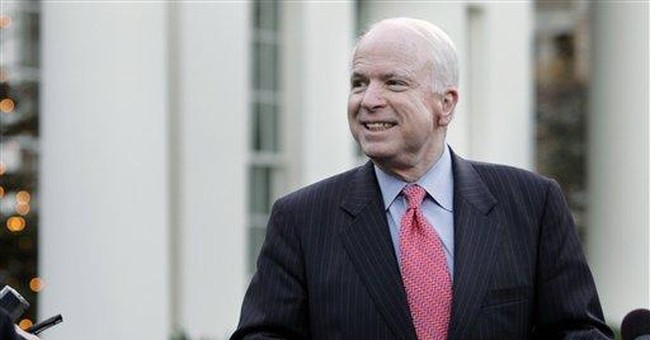 WASHINGTON, D.C. -- For months, advisers to President George W. Bush have been trying to convince the commander in chief that more U.S. troops in Iraq will improve prospects for victory. Senators John McCain (R-Ariz.) and Joe Lieberman (I-Conn.), both recently returned from Iraq (and a courageous surprise stopover in Ramadi, capital of bloody Al Anbar Province) also support adding more American troops. Unfortunately, they are wrong.

"I believe there is still a compelling reason to have an increase in troops here in Baghdad and in Anbar province in order to bring the sectarian violence under control," McCain said after his visit. For his part, Lieberman said the idea of sending another 30,000 troops to Iraq is "exactly" the course of action he hopes to see the president take.

McCain and Lieberman talked to many of the same officers and senior NCOs I covered for FOX News during my most recent trip to Iraq. Not one of the soldiers, sailors, airmen, Guardsmen or Marines I interviewed told me that they wanted more U.S. boots on the ground. In fact, nearly all expressed just the opposite: "We don't need more American troops, we need more Iraqi troops," was a common refrain. They are right.

The call for incrementally increasing U.S. troop strength in Iraq -- a "solution" that was first proffered last summer as the congressional election campaign heated up -- sounds eerily like Lyndon Johnson's plan to save Vietnam in the mid 1960s. Johnson saw "gradual escalation" as a way not to lose, and to avoid the unpleasant necessity of directly confronting North Vietnam. Regrettably, that also meant we could not win.

Adding 10,000 or 20,000 more U.S. combat troops -- mostly soldiers and Marines -- isn't going to improve Iraqi willingness to fight their own fight -- an imperative if we are to claim victory in this war. While putting 200,000 American or NATO troops on the Iranian and Syrian borders to stop infiltration might make sense, that's "mission impossible" given the size of U.S. and allied armed forces.

A "short-duration surge" in U.S. combat strength also ignores progress that is being made on the ground in places like Al Anbar province, where few of the so-called mainstream media dare to spend much time. In Ramadi, long a hotbed of Sunni terrorism, new National and Provincial police forces are increasingly effective. Calling themselves "The Sons of Al Anbar," thousands of young Iraqi males have volunteered to defend their cities, villages, homes and families from terrorists.

Just days after McCain and Lieberman left Ramadi, I went to a police recruiting center and watched as hundreds of young Sunni males were being processed to become cops. Interestingly, the detailed screening of each volunteer was being conducted by police officers from Pittsburg, New York, Cincinnati, Los Angeles and a half-dozen other American cities. Those who passed the background check, medical and literacy tests and physical exam -- about 70 percent -- were then dispatched to Jordan for a six-week training course.

These new police recruits had all responded to the call of Sheikh Abdel Sattar Baziya. He is Al Anbar's most powerful Sunni tribal leader and the instigator of what he calls "The Awakening" -- self-determination through Sunni cooperation with local U.S. military commanders and the Shia-led government in Baghdad. In conversations with Sheikh Sattar at his home, and later at Camp Phoenix, where Iraqi police receive tactical and human-rights training, this populist Sunni chieftain made it clear that this is a war that the Iraqi people must win for themselves. Sheikh Sattar's analysis of the situation is shared by Al Anbar's Sunni governor, Maamoun Sami Rashid al-Awani. Though a Baghdad appointee, Gov. Maamoun, who I have now interviewed on three separate trips to Iraq, is convinced that more U.S. combat power is not the answer. He too wants more U.S. trainers and civil affairs personnel. On more than one occasion Gov. Maamoun, Sheikh Sattar and every military commander with whom I spoke, described the Police Training Teams (PTTs), Military Transition Teams (MTTs) and Civil Affairs Groups (CAGs) as unsung heroes and the keys to victory in Iraq. All of them are advocates for more trainers, improved supply support from the central government and assurances that the Interior Ministry implement responsive administrative and pay systems for the police. One U.S. logistics expert complained that he was receiving no assistance whatsoever from our embassy in helping the Iraqis overcome the belief that "a full shelf is a good shelf." None suggested more U.S. combat troops as a solution. And they all wonder if anyone in Baghdad or Washington is listening. A "surge" or "targeted increase in U.S. troop strength" or whatever the politicians want to call dispatching more combat troops to Iraq isn't the answer. Adding more trainers and helping the Iraqis to help themselves, is. Sending more U.S. combat troops is simply sending more targets. Oliver North is the host of "War Stories" on the FOX News Channel. To find out more about Oliver North, and read features by other Creators Syndicate writers and cartoonists, visit the Creators Syndicate Web page at www.creators.com. COPYRIGHT 2007 CREATORS SYNDICATE INC