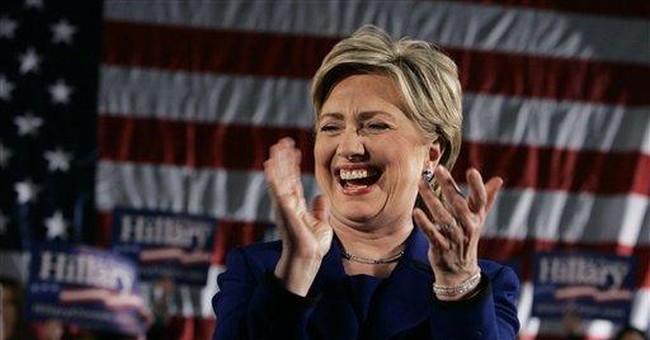 I was leafing through the 1987 copy of Outstanding Young Women of America and was amazed by the resumes of the over 32,000 women listed in the book. It was the year that Elaine Chao was featured prominently as a national winner. Her resume was amazing as were all of the ones featured in the front part of the book who were each given a full page to extol their virtues. The bulk of the book was reserved for us slackers who had only accomplished two inches of 8-point type in a three-column page. But even the slackers were pretty darned impressive. And over 40 years of harvesting the brightest and the best young women leaders, which is, I am sure a fraction of all the women leaders in the country, it is amazing that only one woman is considered qualified to be president.

Two examples of women who are more qualified to be president than Hillary are Oprah Winfrey and Condoleezza Rice. If you do a side by side of Condi’s resume and Hillary’s, it is sort of like comparing my two inch column to Elaine Chao’s full page in the OYWA book.

The question should not be, “what is it that qualifies Hillary to be president?” but it should be, “Why does she think she is qualified?” I mean, when you break it down, she basically was a lawyer, who married a man who became president, cheated on her, bringing home a senate seat instead of the usual box of flowers and chocolate. And???

Does anyone actually think that Hillary Rodham Clinton could have waltzed into New York from Arkansas, with the carpetbag tucked securely under her arm and been a serious contender for the U.S. Senate Seat, against the Mayor of New York City to boot? Then I would suggest that any of the 32,000 women in the 1987 copy of Outstanding Young Women of America, should be considered as legitimate contenders for any public office they would want to serve in.

All discussion of resumes should now be universally determined as irrelevant for any person who wants to pursue public office, even the White House. That standard has been lowered to the point that literally half the country would qualify to run for that position. And according to Hillary, just existing as an adult, for 35 years prior to running for office is sufficient to suggest a lot of really neat things were accomplished.

The jewel in her vitae crown can’t be that she got a law degree from Yale, because according to the liberal elite, George Bush, with a degree from both Harvard and Yale is a blanking idiot. When not one individual from either of those two laurel-resting institutions will rise to contest the assumption that they graduate idiots, it can only be assumed, that every Yale and Harvard graduate is an idiot.

So, let’s see, what else is on her resume . . . a lawyer. That means that both Laura Ingraham and Anne Coulter would both qualify to be President, and they have written more books that Hillary with actual substance. Not Children’s books and a self-promoting tome of unbearable proportions. And because I took that leave of absence in my third year of law school, because the business I was owned was growing exponentially, I am only six months behind being qualified to be president. But, I have a second-degree black belt and Hillary doesn’t. I am and artist, producer, director, can drive a Bobcat and rip the bulls eye out of a target with a gun, among a myriad of other accomplishments that I would love to challenge Hillary to compete with. Could we put those accomplishments in a column opposite the tough duty of traveling the world as a pampered First Lady?

Let me see . . . someone arranges your itinerary, picks you up, flies you some place on a private plane, lands you amidst adoring crowds, wines and dines you, shows you what is photogenically the best representation of their country, or what could bring in the biggest bucks in handouts, you get back on the plane and go to another country and repeat those same predictable steps. Sounds a lot like a video game.

How many countries was she saying she has been to? Eighty? Just for fun I was counting all the countries I have been to and she has me beat by 10. That means with a few more frequent flyer miles, I could either be president or First Lady. I love when life gives you choices. But in my travels I have slept in the middle of the Sahara dessert, have showered in cold rusty water in Mongolian orphanages, rebuilt villages in Guatemala after earthquakes, observed the media distorting the truth in South Africa, painted in Monet’s garden in France, run out of gas in England, been attacked in Mexico and Costa Rica, held hostage in Egypt, and stranded in New Zealand after the attack on Sept. 11. Oh my, the list is long, involved, and certainly more colorful than having handlers sanitize a world experience and then pass it off as being an expert in foreign affairs.

Tens of thousands of people have been in meetings with presidents, kings, chiefs, prime ministers, and members of various parliaments and congresses, and it is always the same . . . kiss kiss, smile smile, isn’t it wonderful that we are in the same room chatting. Golly this diplomacy stuff sure is fun isn’t it Gomer.

Ok, so she is a lawyer, married to a guy who got her a senate seat and she travels a lot . . . on the taxpayer dime and has spent most of her time as a “Senator” running for president. What’s that? What kind of qualifications are those to have the audacity to even think you can lead a nation that is at war with people you clearly don’t see as dangerous. She wants to give out driver’s licensees to illegal aliens to keep them safe on the road but doesn’t think it is important to keep the country safe from people who have proven they want to destroy us. See, I would be a better president; I at least get the basics.

But I think the thing that is so annoying about the arrogance that she demonstrates, by practically demanding that we kiss her ring and bow at the altar of self-indulgence, is that she has been myopic in her insatiable desire for unbridled and absolute power. And she will stop at nothing to get it, from being the femme fatal to the shrinking violet, blaming all men for her failures. And ironically, as she claims her run is a first for women everywhere, and they will benefit greatly by her service, we can’t help but reflect upon the Bill factor and remember that his legacy toward women is less than exemplary.

In all the accusations by women who claimed he exploited them for sexual gratification, Hillary’s concern was never for them. She never admitted that her husband was a danger to women and should be muzzled because his proclivity to indulge in unfettered sex would become an impediment to her perverted desire for power.

For her to claim she is the voice of women is not only laughable it is downright dangerous. With her in the role of the Commander of Enabling, no woman in the country would be safe, with her husband on the prowl. And no feminist worth her salt would hang on her husband’s coattails to catapult herself to a position of power then claim she got there on her own merits. What merits?

Hillary is a modern day Evita Peron seeing all other women in the country as the illiterate, unwashed masses, that she has to single-handedly represent, even if it means dropping some of them in the cenote of greed, convenience and naked power. She thinks we are all back in 1970, burning bras and marching for equal pay for equal work. I bet Bill O’Reilly wishes he had equal pay with Oprah, and every man I know would love to have the sweetheart book deal that Hillary got.

Hillary is not only stuck in a time warp of the heady days of US-bashing 60s and 70s, but she is myopic in her understanding of the complexities of human nature and individuality. I know, it is hard for socialists who adore the halcyon illusion that Marx could have been right, to embrace the fact that all women are uniquely different, as are men, and have unique needs based on their own life experiences.

For Hillary supporters to claim that ALL women should support her because they have matching genitalia is an insult to all thinking women who are not intimidated by that type of exploitive dialogue. But then, these are the same people who called Paula Jones “white trash”, debunked Juanita Broadrick’s accusation of rape by Bill, and laughed at Kathleen Wiley’s detailed incident of unwanted groping by Bill, and winked at his molestation of a teenage intern which personified sexual harassment in the work place. They really think that all women fantasize about having sex with Bill and they secretly desire to be Hillary.

Women today actually think for themselves, and know a con when they see it. And no woman worth her salt is going to vote for a woman who willingly allows her husband to prey on other women while she works a political ménage et tio to get to the White House.

If Hillary really as the smartest woman in the world she would realize that she is not equipped to handle this job and her raw hubris and arrogance is proof that she is out of touch with reality. If she really loves this country and claims she wants what is best for it, she will realize she is not the answer and that her predatory husband should never again be unleashed upon unsuspecting women who look up to Hillary as a spokesperson for helpless women.

But when you are blinded by an insatiable desire for power, born of an elite smugness reminiscent of benevolent dictators who defer to the masses and acquiesce to lead, because only they can . . . then you really are out of touch with reality. And the enablers, like the aging feminists and sycophant media, don’t care about substance or qualifications because she becomes a convenient caricature of a flawless leader they have created in their minds, detached from reality.

It is sad, that out of the millions of amazingly qualified women in this country, we are stuck with one who truly will cause women to go DOWN in history if she is elected.