North Korea Backs Out of Negotiations 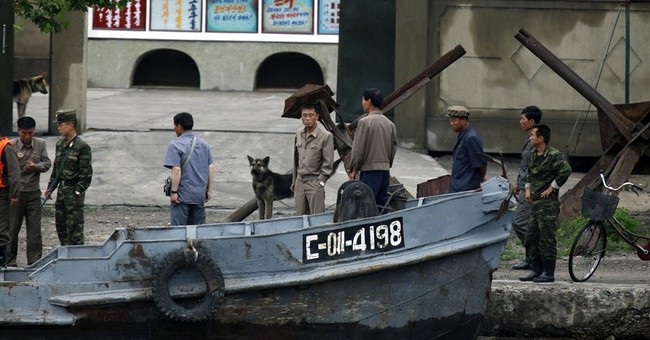 South Korea-North Korea: An agreement between North and South Korea to hold high-level government talks on 12 June collapsed in a dispute over the level of representation. South Korean officials said that the talks, planned for Wednesday, were canceled but that it was still open to dialogue with the North.

The disagreement surfaced after the two Koreas exchanged the lists of their five-member delegates. South Korea had intended to send its Unification Minister, but balked when the head of the North's list was not a member of the North Korean cabinet.

The South then proposed its delegation would be led by a Vice Minister. That prompted the North to cry foul and to cancel the meeting.

Comment: This looks like a set up. Yesterday item four in the North's press release cited agreement that a ministry-level official would lead each delegation. The North clearly reneged on that commitment.

The timing and the difference between the North's agreement on the delegation head compared to the person it proposed strongly suggest the North had no intention of keeping the agreement one day longer than needed for Chinese President Xi to conclude his summit meeting in the US.

If the North really needs the cash, this problem will be resolved soon. If it is not fixed soon, the inference would be strong that North Korea was obliging China for the sake of the summit. Stumbling over trivial slights with great indignation is the North's shop worn way of avoiding a commitment it never intended to keep.

Comment: This was a serious security breach. The message is the government cannot defend its key institutions and the people who work in them.

Iraq: Comment: The tally from the Monday attacks is 94 killed and 289 injured. Attacks occurred in 17 towns including Baghdad.

Turkey: Beginning early on Tuesday, police asked protesters to withdraw from Taksim Square in Istanbul using loudspeakers. When they did not leave, the police began using water cannon, tear gas and rubber bullets to clear the Square. Bulldozers cleared barricades and shelters and authorities removed protesters' banners from a building overlooking the square, replacing them with the national flag and a portrait of the father of the Turkish state, Kemal Ataturk. Protestors threw fireworks, fire bombs and stones at police.

The prime minister defended the police intervention on Tuesday, saying that an environmental movement had been hijacked by people who wanted to harm Turkey.

In a televised speech to members of parliament belonging to his Justice and Development Party (AKP), he said, "To those who... are at Taksim and elsewhere taking part in the demonstrations with sincere feelings: I call on you to leave those places and to end these incidents and I send you my love."

"But for those who want to continue with the incidents I say: 'It's over.' As of now we have no tolerance for them. Not only will we end the actions, we will be at the necks of the provocateurs and terrorists and no-one will get away with it."

"I am sorry but Gezi Park is for taking promenades, not for occupation."

Comment: Istanbul remains the main locus for protests. The protests have drawn attention to an undercurrent of opposition to the direction of the country under Erdogan, but their methods of seeking redress generated little sympathy. The hardline and police crackdown will continue.

Egypt: For the record. Egypt's largest opposition group said Tuesday that President Mursi's call for national reconciliation talks come too late. Activists reportedly are preparing a street protest campaign at the end of the month to demand the President's resignation.

Meanwhile, tension is building between Egypt and Ethiopia over an Ethiopian plan to build a dam on the Blue Nile that Egypt claims would reduce the flow of the Nile through Egypt. Ethiopia has tried to reassure Egypt that the Nile would not be affected, but some experts say that the Nile's flow would be reduced until after the dam reservoir was filled.

Mali: The Bamako government is in negotiations with the Touaregs over restoring central civil administration and a national military presence in Kidal in northern Mali. Today delegations meeting in Burkina Faso reached an agreement in principle that would avoid a pitched battle over possession of the town.

Comment: Mali will hold general elections in July, but Touareg rebel control of Kidal posed an obstacle to holding elections in the north. The government negotiators have proposed a mixed commission to oversee security so that elections can be held. If the agreement is accepted, it signifies that neither side wants another fight in Kidal.