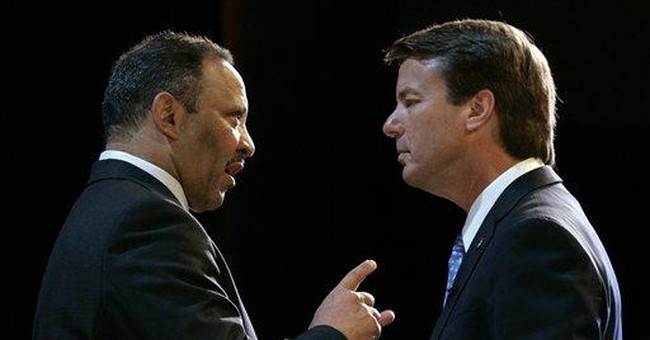 Though he’s stuck, for now, in third place in the national polls, John Edwards has set the tone for the Democratic presidential race over the past few months. When Edwards apologized for his 2002 vote to authorize force in Iraq, some Democrats called for Senator Hillary Rodham Clinton to do the same. When Edwards proffered an ambitious universal health-care plan, critics pointed out that the health-care ideas that Clinton and Senator Barack Obama have floated don’t quite measure up. Now Edwards has unveiled a tax-overhaul proposal that’s just as detailed and universal as his health-care plan. Will Edwards’s blueprint set the new Democratic standard, or will his fellow mainstream candidates immediately reject much of it as bad for the American economy, and bad for Americans—rich, middle-class, and poor?

In announcing his “Building One Economy” plan last Thursday in Des Moines, Edwards said that “the engine of our economy is not in Washington . . . or [on] Wall Street. It is the tens of millions of men and women in offices, factories, and fields across America who go to work every day.” To help these men and women, Edwards wants to restore “fairness” to the tax code and end what he calls the Bush administration’s “war on work.” He’d do so by nearly doubling the tax rate on investment gains for American families earning more than $250,000 annually—from today’s 15 percent to 28 percent, or 40 percent higher than it was during the investment boom of the Clinton years. He reasons that “high income investors [should] pay taxes on their investment income at a similar rate to what regular families pay on their earned income.”

Edwards also would force hedge-fund and private-equity-fund managers to pay tax on their investment gains at the regular income-tax rate, rather than the lower capital gains rate, so that they’d give 39.6 percent of this income back to the government. And he’d repeal Bush’s across-the-board income-tax cuts for families earning above $200,000 a year, ensuring that they pay 39.6 percent of their taxable income to the feds, too, instead of today’s 35 percent.

Some of this “soak-the-rich” policymaking will please voters who don’t understand how the economy really works. But despite what Edwards says, the engine of our economy is largely Wall Street (Washington is, alas, the caboose). Financiers and investment managers on Wall Street, and in London and Dubai, put their investment dollars into start-up companies as well as established companies all over America. If the cost of that investment capital rises—thanks to the U.S. government’s dramatically increasing its own percentage of any profits—then the capital will become scarcer. Investors may shun taking risks, knowing that the potential reward will be much lower. Further, Wall Street investment managers can easily move to Dubai, or Mumbai, or other exciting cities competing for our capital—and some entrepreneurs and start-up companies will follow, taking jobs with them.

As for Edwards’s tax hike on “wealthy” income earners, he doesn’t seem to understand that there’s no bright line between the “rich” and the middle-class. Senator Clinton, for example, if she were brave enough, might point out that hundreds of thousands of her downstate constituents take home $200,000 a year, and still think of themselves as middle class. In fact, on the same day that Edwards unveiled his plan, New York City announced that it would start paying police captains a base salary of $142,000; a captain married to a paralegal easily could exceed $200,000 a year in household income. One reason that Edwards-style plans never seem to gain much traction with the public is that many voters believe that they’ll eventually be in the ranks of what Edwards defines as “rich”—even if, today, they earn only in the mid–five figures annually.

It’s a shame that Edwards makes a soak-the-rich theme the centerpiece of his tax-policy proposals, because other parts of his program aren’t all bad.

He’d sensibly reform a Clinton-era policy, the “earned-income tax credit,” that has helped to get millions of poor families off the welfare rolls by paying them a few thousand dollars annually in supplemental income. This program means that millions of poor families don’t pay taxes; instead, they receive several thousand more than they would have paid in taxes every year. The EITC gets at least part of the credit for the rising income of the nation’s poorest families. According to the Congressional Budget Office, families in the bottom 20 percent of earnings saw their incomes rise 35 percent after inflation over the past decade and a half, more than the increase of any other income group save for the top 20 percent. Middle-class and wealthier taxpayers wind up funding the program, of course, but it’s more palatable than straight-out welfare—the thinking being that once the poor have joined the work force, they’ll move up eventually, and set a good example for their kids. My colleague, Howard Husock, recently proposed eliminating the feds’ stale buffet of antipoverty programs, including housing vouchers that ghettoize poor families, and focusing on the much more effective earned-income tax credit instead.

Edwards would cut the earned-income tax program’s severe marriage penalty, which perversely encourages single mothers to stay single so that they can get more money from the government each year. And he’d expand the program’s income supplement for single adults, thus rewarding Americans who’ve chosen to delay both marriage and childbearing as they try to make it in the working world. He’d also add a $500-a-year savings bond to the program, provided that families match the government’s contribution, and he’d allow poorer families to direct part or all of their annual “child credit” into a savings account for college, encouraging them to save for the future rather than spend their tax credit every year.

All of these proposals warrant serious debate, especially if they’re coupled with cutbacks in less successful antipoverty programs. But America can’t have a real debate on economic issues when too many middle-class swing voters rightly fear that any more money to help the “poor” will come out of their own pockets, thanks to Edwards’s zero-sum politics.

More saliently, if Edwards forces up the cost of capital for job-creating entrepreneurs, start-ups, and corporations via his tax hikes on capital gains and more affluent earners, we won’t be able to pay for these programs, old or new, anyway. Edwards really proposes to curtail wealth, which, after all, makes possible job growth in the economy as well as transferring payments to the people he most wants to help.