Mass Murder, Martyrdom, and the Media 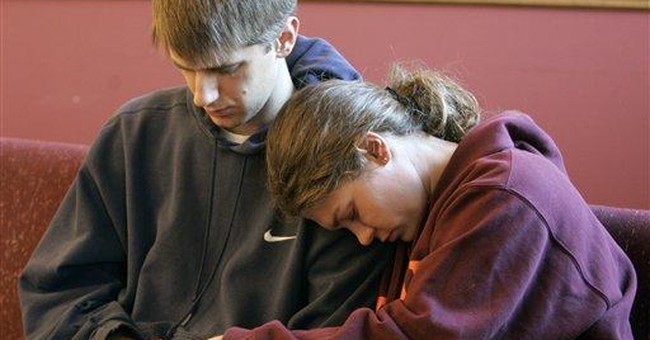 Why did NBC News—as well as its competitors and print-media counterparts—show that video? Through the spectacular posthumous attention that the media have awarded him, Cho Seung-Hui has shown just how easy it is for an intelligent killer to manipulate sophisticated news organizations into serving as barely filtered propaganda pipelines.

Mass killers don’t operate in a vacuum, and Cho learned well from Columbine mass murderers Dylan Klebold and Eric Harris. The Columbine killers made their own propaganda to accompany their attack, but they didn’t think to send it directly to the media before they killed 12 high school classmates and a teacher. Investigators kept most of the material that the two teens had created away from the public for years, until interest had waned (their major work, a video that they spent a year making, remains under government seal to this day). Klebold and Harris got famous, but they never planned well enough to use their mayhem as a platform to speak directly to the public.

Cho, who doubtless watched television coverage of the Columbine attack as a high school student himself eight years ago, clearly wanted to surpass Klebold and Harris and avoid their mistakes, so he cut out the law-enforcement middleman. NBC ran footage from the homemade DVD that he sent it and published the lurid self-portraits of him posing with his weapons—before the 32 families that he tore apart could even bury their loved ones. One wonders if it was merely by chance that Cho committed his murders bright and early Monday morning, the beginning of the week’s news cycle.

It wasn’t necessary for NBC and its competitors to air Cho’s propaganda to fulfill their public purpose, which is to report the news. NBC could have had a team of reporters and editors view Cho’s video, snapshots, and written manifesto, and write a sentence or two, soberly summing it all up. What news purpose does it serve, for example, to show Cho as he wanted us to see him, in full killing regalia? What news purpose does it serve to allow Cho to recite his insane reasons for killing students and teachers? Cho had no authority to speak to the public; if he had sent NBC a video and letter complaining about our social and moral ills without killing anyone, the network would have ignored him. He gained his media authority by killing. The media fell right into his manipulative hands, affording him the martyrdom he sought.

For martyrdom goes beyond fame, and it’s obvious that Cho wanted something besides infamy—he wanted the public to listen to his worldview. His irrational agenda wasn’t so different from the agenda that Islamist terrorists sometimes recite in their own martyrdom videos: to wit, we drove him to act through the various bad things that we do. Cho, just like some Islamist terrorists, wanted us to blame ourselves for his killing, and to change our behavior.

Cho will inspire future mass murderers, who can see in his media hijacking an effective way to punish society and to achieve a sensational airing of their disordered worldviews. And while Americans (likely including a few of the next generation’s potential killers) have been glued to their TVs and computer screens all week, they’re not the only ones. Cho’s carefully planned performance made global news.

The jihadists out there somewhere, already expert at manipulating our media, have learned a valuable lesson. They don’t have to accomplish another 9/11 to win the media time that they need to manipulate the target audience: the American people. They just need to kill 40 or so of us in the right place, at the right time, and not before express-mailing to NBC the video explaining how and why we drove them to it.

This article originally appeared in The City Journal