Dems Can No Longer Use the Economy Excuse 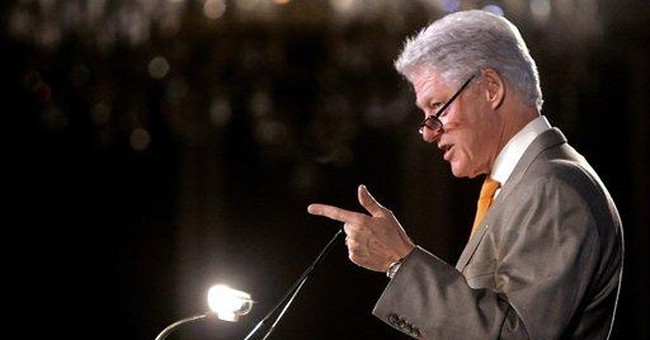 Some economic news came out of Washington this week which should give every Democratic candidate for President reason to pause.

What this news bulletin shows is that Dems can no longer repeat the tired Clinton Era mantra, "It's the economy, stupid."

The Commerce Department is reporting that the gross domestic product—the gold standard of economic barometers—grew at a respectable rate of 3.4 percent in the 2nd quarter of the year. Even the mainstream news media admit that this is a figure that President Bush can be proud of.

The Associated Press reported that the GDP was helped in part by the fact that businesses—the real engine that drives our economy—were able to sell a greater number of goods overseas. And, even though we've been hearing constant news flashes about the housing slump, housing troubles did not have the adverse effect on the economy that they have had in previous quarters.

On the heels of this economic breakthrough, President Bush stated, "I want the American people to take a good look at this economy of ours. It's an economy that is large, flexible and resilient."

Of course, the naysayers still aren't satisfied. Senator Charles Schumer, a Democrat from New York, was quoted as saying that the economic rebound was "a temporary oasis." I suppose one can consider life itself a temporary oasis from death, but, really, would it kill the Democrats to admit that the President might have done something right, as far as the economy is concerned? Meanwhile, while noting that Wall Street investors need to exercise caution, Treasury Secretary Henry Paulson insisted the economy's fundamentals are solid.

Paulson was quoted as saying, "Lenders need to be very aware of the risks. Borrowers need to be aware of risks. I would submit people are more aware of those risks and the need for discipline today than maybe they were a month or two ago. So again let's keep our eye on the very strong underlying economy, which puts us in a position of strength."

Analysts are reporting that businesses appear to be regaining their confidence, boosting inventories, and expanding exports. Of course, one could argue that business executives continue to be stymied by a tax structure that discourages economic growth rather than encourages it; nevertheless, our national economy seems to be moving in a positive direction.

It should also be noted that our nation's immigration woes threaten to wreak havoc with our economy. You can't have a flood of illegals pouring into our country and not expect it to have an adverse effect on the standard of living of those who already call America home. While we are a nation of immigrants, the rule of law should reign supreme in order to prevent us from becoming overburdened.

All of which leads to an intriguing scenario: If Republicans are able to hold onto the White House in '08, observers may credit the GOP candidate's stand on terror, homeland security, and immigration. Or, they may just remark, "It's the economy, stupid."