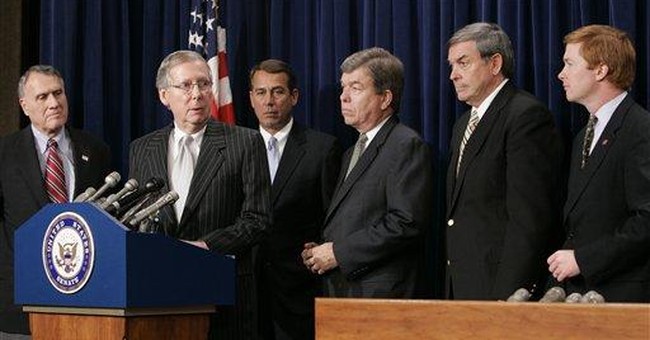 One lesson that I’ve drawn from the 2008 Presidential campaign is that America needs a fresh face. As much as Hillary Clinton and Barack Obama may try to portray themselves as agents of change, they so monopolize the media spotlight that many of us have already grown weary of them and their rhetoric. If Americans want positive change, they should look to someone other than the political media darlings. They should look to Duncan Hunter. (Full disclosure: I’ve recently begun consulting with Hunter for his internet campaign.)

If you do not live on the West Coast and you’re not a seasoned observer of Congress, you might well be asking, "Duncan Who?" But in this political season, it is a distinct advantage to not be part of the media-appointed old guard.

If you’re concerned about national security, Duncan Hunter should be your guy. For more than a quarter century, he has worked diligently to ensure that America has a military it can be proud of. He knows first-hand the importance of a strong military, having served in Vietnam. As part of the House Armed Services Committee, Hunter has worked diligently to ensure that our military is well-equipped to defend America and its interests anywhere in the world.

Hunter is also well-equipped to take on the challenge of dealing with our nation’s immigration problems. While he has a heart for the plight of immigrants, he realizes that America’s borders must be secure for the safety and well-being of all our citizens. He sees illegal immigration for what it is—a dangerous practice which represents a primary threat to our national security. Duncan Hunter is a true-blue conservative who puts the Republicans-In-Name-Only candidates to shame. Visit his website and you’ll quickly see that he is no shrinking violet when it comes to one of the most contentious issues of our day—legal abortion. Hunter states, "I would amend the U.S. Constitution and provide blanket protection to all unborn children from the moment of conception by prohibiting any state or federal law that denies the personhood of the unborn."

Hunter has also introduced legislation known as the "Right to Life Act," which he says would "legally define 'personhood' as the moment of conception and, therefore, guarantee all constitutional rights and protections, including life, to the unborn without utilizing a constitutional amendment." Hunter has also co-sponsored legislation which would bar someone from transporting a minor across state lines to obtain an abortion…prohibit reproductive cloning…and require abortionists to let pregnant women know that children aborted 20 weeks after conception can feel pain. If he can feel the pain of the unborn child, Hunter fits my definition of a "compassionate conservative."

Hunter is also committed to helping to preserve and protect the American family through his support of a Constitutional amendment defining marriage as the union between one man and one woman. As Hunter simply yet eloquently states, "I firmly believe that children need the unique influence offered by both a father and a mother."

And, unlike some of the spendaholics who are currently seeking the White House, Hunter is truly committed to a balanced federal budget—one crafted according to the philosophy of economic growth rather than tax-and-spend liberalism.

Despite lacking the war chest of a McCain or a Giuliani, Duncan Hunter may yet prove to be the dark horse candidate in the Republican primary. Hunter won the Arizona straw poll, and then went on to edge out Romney for third place in the South Carolina poll. It may be early to make predictions, but Hunter’s candidacy seems to have touched off genuine excitement in conservative circles. Duncan Hunter may not have the best name recognition in the Presidential pack—but, after a careful review of all the candidates, their backgrounds and positions, I firmly believe he is the one who deserves the most attention.