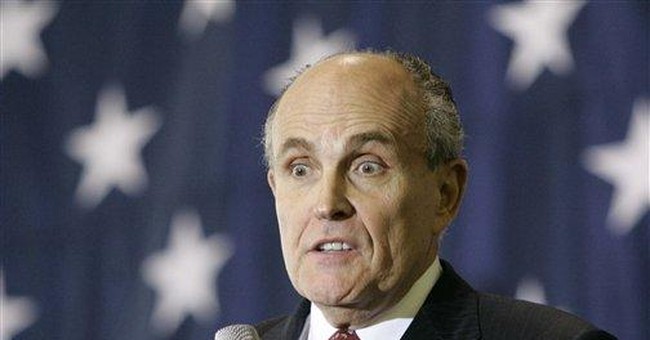 There’s a secret within the news business—a secret probably only veteran reporters and their friends know, but would be loathe to admit—reporters don't really like surprises.

Now, that might seem an odd statement to make about people who make their living pushing news. But the unexpected can really mess up the story you’ve just written, which, in turn, can cause you more work, more stress, and more time at your computer terminal.

As a result of this phenomenon, once the major media have anointed a front-runner for President, they don’t like a maverick honing in on his—or this year, her—territory. They want to defend their choice for a given party's nominee because, if some upstart actually makes a contest out of it, it could play havoc with their work schedules.

Consequently, it's not surprising that the mainstream media would just like to see Republicans anoint Rudolph Giuliani as their standard-bearer and be done with it. After all, he’s leading in public opinion polls, he makes for good copy, and the media can have a field day with his various attempts at cross-dressing.

And there are those outside the liberal mainline media—talk show hosts known for their conservatism—who are rooting for Rudy too. They are touting the fact that he "cut more taxes than any (other) mayor in New York City history," as his website proudly boasts. His predecessor bequeathed to him a $2.3 billion dollar budget deficit which he parlayed into a multi-billion-dollar surplus. He earned a reputation for cleaning up New York, cracking down on crime in an attempt to make the city livable again.

Still, the man who's been dubbed "America’s Mayor" may not have what it takes to be "America’s President." For one thing, he lacks authentic conservative credentials. While Giuliani can claim that he would appoint a Roberts- or Alito-type to the U.S. Supreme Court, he’s pro-abortion. That means he’s beholden to the abortion faction in our nation—a faction that believes partial-birth abortion should be considered in the same light as gum surgery. Once Republicans regain control of Congress, it’s tough to imagine Giuliani signing legislation that would offer any sort of protection to unborn children.

In addition, Giuliani is not in a position to defend family values, given his history of defending special rights for people who actively engage in a homosexual lifestyle. As Michael Long of the New York state Conservative Party said in 2004, “I just don’t see Rudy Giuliani being able to sway conservatives within the Republican Party. The gay marriage issue draws a line down the middle of the street, and Rudy Giuliani is something of a champion of gay rights.” As mayor of New York, Giuliani signed a "domestic partnership" bill; he has supported civil unions for homosexuals; and he lived with two homosexual men.

Is Giuliani the most liberal candidate running for the White House? Hillary and Barack could certainly give him a run for his liberal money. But the hero of 9/11 is no conservative, and it would be a mistake for the mainstream media to count out conservatives this Presidential election season—even if it would cause them trouble meeting their deadlines.