Things We Know That Just Ain't So 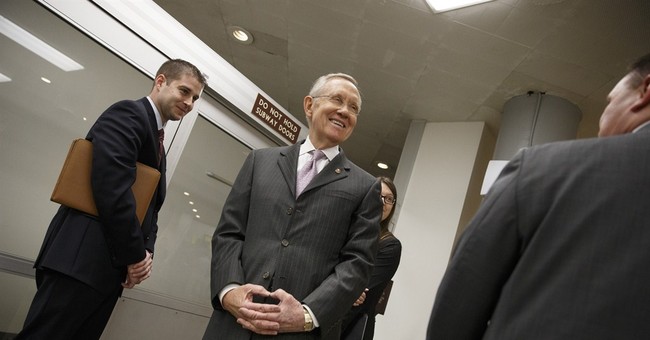 Trending
2013 will be remembered as the year President Barack Obama's halo went askew. It deserves to be remembered for some other things.

It was the year Democrats killed the United States Senate. If you missed the story, it's not surprising. When Sen. Harry Reid eliminated the filibuster, it was billed as the Democrats' last-ditch response to Republican "obstructionism." We were invited to play tu quoque because Republicans had threatened to invoke the "nuclear option" themselves in 2005. Largely ignored was Reid's relentless assault on Senate traditions.

The body, most memorably described by George Washington as the "saucer" into which legislation was poured to cool, had been stripped of many of its traditions even before Reid pressed the nuclear button. "The amendment days are over," Reid proclaimed in 2012. Underlining the point, he filled the "amendment tree" of every important piece of legislation, offering Republicans no opportunity to suggest alternatives. Reid then demanded a cloture vote, often on the same day. The Reid reign is more Capone than Cicero: no debate, no amendments, no time even to read bills. Protecting minority rights and preserving the Senate's tradition of debate has always been a triumph of the American system. The year 2013 sounded a tocsin.

It was a bad year for those who think they understand and control vast, complicated systems. Yes, I'm thinking of Democrats and Obamacare, but also the sun. Climate activists have assured us with chilling urgency that the global temperature is rising and that turning the dial labeled carbon dioxide several clicks to the left will avert catastrophe. Except 1) it's nearly impossible to reduce CO2 (think China and India); 2) it's been 18 years since the atmosphere showed any warming despite increasing concentrations of CO2; and 3) money spent on reducing CO2 cannot be spent on other problems.

Now, another variable seems to be misbehaving. Apparently, the sun is weakening. "There is no scientist alive who has seen a solar cycle as weak as this one," Andres Munoz-Jaramillo, who studies the solar-magnetic cycle at the Harvard-Smithsonian Center for Astrophysics, told The Wall Street Journal. More than half of solar scientists, according to the newspaper, speculate that the sun could be returning to a more quiescent phase after a burst of activity that began in the 1940s. Or not. The sun may be dimming a bit, but it may not affect global temperatures because we've been pumping CO2 into the atmosphere. On the third hand, it's possible a more pronounced solar minimum could yield another glaciation. During the last one, an ice sheet one mile high covered most of North America.

A little humility about our capacity to predict something as complex as climate would be welcome. It isn't a matter of trusting science versus denying the scientific method. It's a matter of distrusting the herd mentality that can affect scientists as well as other mortals. I happen to think global warming may well be a serious problem for coastal regions in the future. This much having been said, there are serious flaws in the way science is conducted.

Consider cancer research. A rule of thumb among biomedical venture capitalists, The Economist reports, is that half of published research cannot be reproduced. A 2013 study by Amgen found that of 53 "landmark" cancer studies, only six could be replicated.

The pressure to publish is intense among academic researchers, yet scientific journals prefer newsworthy findings to refutations of older studies. A reported one-third of scientists confess to knowing of a colleague who cherry picked data or excluded "inconvenient" facts to tart up his or her research. Grants often flow to politically sexy topics like global warming, and scientific dissenters from orthodoxy suffer some of the same social and professional ostracism as heretics of an earlier time. The heart of the scientific method is disproof. Skepticism then, not unflagging belief in any particular theory of climate change, is the mark of the truly enlightened mind.

Speaking of things we know for sure that just ain't so (in the words of Mark Twain), 2013 was a year in which Mexico emerged as a promising startup. Our impoverished and corrupt neighbor, from whom we just knew we could expect an endless parade of illegal migrants year in and year out, is producing jobs at an enviable clip. Per capita gross domestic product, Pierpaola Barbier and Niall Ferguson write in The Wall Street Journal, is outpacing Brazil, and a series of free-market reforms may well revitalize Mexico's energy, telecom and education sectors.