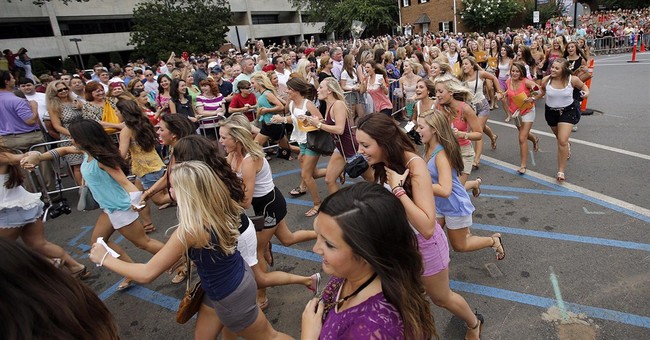 Columnist Ross Douthat has stirred up a hornet's nest by commenting on a new study suggesting that being the parent of a girl may nudge people toward the Republican Party. Douthat speculated that watching daughters cope with a "social landscape in which sex has been decoupled from marriage" and in which young men cruise through the sexual marketplace, leaving broken hearts in their wake, may cause mothers and fathers to embrace more conservative mores regarding love and sex.

"Are we supposed to believe that the solution to a biological double-standard is a sexual double-standard? That women who want it all later in life must spend their youth prim and sexless, waiting for men to prove that they've got themselves together both professionally and emotionally? There's one little problem: We like sex. None of us are going back to a world in which we only put out once he's put a (promise/engagement/wedding) ring on it."

Every generation believes it has discovered sex. But Friedman's heated denials notwithstanding, women (on average) want different things from sexual relationships than men, and recent generations of women have been ill-served by feminism's embrace of the sexual revolution. Feminists posited that women and men were identical in their sexualities, and that only an absurd double standard had required men to treat women respectfully.

When modern feminism debuted in the 1960s, it didn't just urge women to be like men; it encouraged them to be like the worst men -- carelessly promiscuous, vulgar and selfish. Some men treated women as disposable pleasure vessels. Feminists regarded this not as a disgrace but as a challenge. Women who behaved the same way toward men were hailed as feminist pioneers.

How do we know that women are more interested in committed relationships than in casual sexual encounters? Only an age that has lost touch with common sense would ask, but as it happens, there is social science evidence. Consider the differences in behavior in which men outnumber women and vice versa, i.e., the sex ratio. As James Q. Wilson noted in "The Marriage Problem," at various times and places, when marriageable men greatly outnumber marriageable women, monogamy and sexual restraint prevail. That's because men are forced to compete on women's terms. The reverse is true as well. When men call the shots, because women greatly outnumber men, monogamy declines and promiscuity increases.

These patterns have been observed from China to Louisiana to post-World War I Europe. Mark Regnerus and Jeremy Uecker, authors of "Premarital Sex in America found the same on college campuses. " . . . Virginity is more common on those campuses where women comprise a smaller share of the student body . . . By contrast, on campuses where women outnumber men, they are more negative about campus men, hold more negative views of their relationships, go on fewer dates, are less likely to have a boyfriend, and receive less commitment in exchange for sex."

Without permission from feminists, the hookup culture, which disserves both sexes but women more, would be impossible. A recent New York Times magazine piece about hooking up suggested that college women who arrive on campus hoping to find a boyfriend are quickly disappointed. They sometimes offer oral sex in a first encounter (not date) as much to "get it over with" as anything else. Feminism has brought this liberation to you, ladies.

Both men and women express regret about casual sexual hookups, but women more. And the premise that women want exactly the same things as men in just the same way has created a booming industry of campus rape accusations, miscarriages of justice, Take Back the Night marches and mutual suspicion between the sexes. Why are there no men marching against female sexual harassment and vanishingly few charges?

Did dramatically more men become rapists after the sexual revolution encouraged drunken bed hopping, or have the looser standards confused more young men about the (brace yourselves) greater vulnerability of women? And who taught men that women didn't need special consideration of any kind?

Most women don't want what the worst men have always wanted -- sex with no strings attached. Women are all about strings. They want intimacy, tenderness and commitment -- all of which have been placed further out of reach by feminism's conquest of the culture.