A Victory for Iran 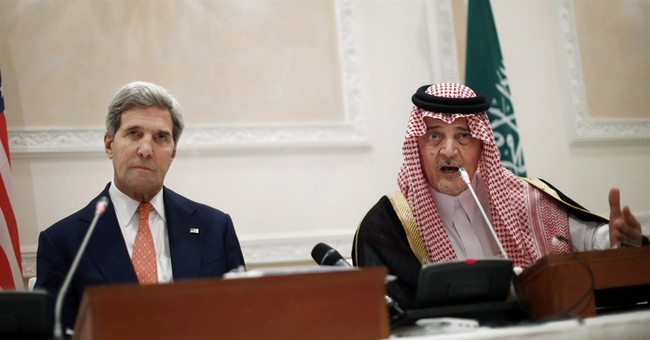 Ninety percent of the American opinion elite will fall for the old "historic breakthrough" conceit every time. The appeal of getting enemies in a room together, where they will shed their animosity and "reason together," is so profound that nothing as tiresome as experience can diminish its allure.

Don't talk to Secretary of State John Kerry or President Barack Obama of the League of Nations (which enjoyed such success ensuring world peace) or the Kellogg-Briand Pact, the 1928 treaty that outlawed war as an instrument of national policy. Fifty-four countries, including all the major belligerents of World War II, signed the pact. Don't mention the series of "breakthrough agreements" between the United States and North Korea (Claudia Rosett offers a timely reminder), in which we thrice (1994, 2005 and 2007) offered security guarantees, food aid, diplomatic concessions and cash in exchange for North Korea's promise to discontinue its nuclear program. The very same person who handled negotiations with North Korea for the Clinton Administration, Wendy Sherman, is now heading up the U.S. team and stroking the Iranians. (The George W. Bush administration, more immune than most to the siren call of diplomatic breakthroughs, did fall into the trap with North Korea.)

Kerry, denying the Geneva Accord is a naive exercise in wishful thinking, pleads that we need to "put to the test Iran's words and intentions." Any contract requires a meeting of the minds. Kerry keeps saying that we don't need to trust the Iranians because we will be checking them at every stage. But if the parties do not even agree to what they've just signed in the 18 hours after inking a document, how well is verification going to go? Mohammad Zarif, Iran's chief negotiator, asserted that the agreement takes the threat of force off the table and enshrines Iran's "right" to enrich uranium. Kerry flatly denies both. Nice start.

Kerry also challenged Iran to "prove" to the world that its nuclear program is only for "peaceful purposes." Is that a question an adult, far less America's chief diplomat, should pose? Iran controls the world's fourth largest supplies of oil and second largest reserves of natural gas. Are we to believe that Iran is pursuing nuclear power because of concern about climate change? How exactly would Iran's active research on nuclear weapons design and development of ballistic-missile technology suit that explanation?

It has been obvious for more than two decades that Iran is determined to join the nuclear club -- a goal American allies in the region and right-thinking people the world over view with horror and dread. Five Security Council resolutions have demanded Iran to suspend all enrichment of uranium. The Obama administration itself has repeatedly and starkly declared that Iran's possession of nuclear weapons is "unacceptable."

Though, as with so many things, Obama has said this pronouncement is nothing more than a windsock -- it shows which way the wind is blowing, but doesn't hold anything. Like the "red line" about Syria's use of chemical weapons, the stentorian injunctions against Iran's nuclear pursuit are also just so much wind.

Both Kerry and Obama have repeatedly argued negotiation is the only alternative to war. By blurting this in an attempt to dissuade Congress from passing further sanctions, they completely neuter any implied threat of military force. Iran certainly notices the Obama administration's eagerness for a deal, as well as its rejection of military action.

Nor is it correct the only alternative to this capitulation was war. The sanctions this agreement supersedes were working well to force the Iranian regime to come to terms. Their nation is struggling with high prices, shortages and a collapsing currency because of sanctions. This should have been a moment of maximum leverage for the United States and other powers. Yet the deal they've achieved does next to nothing to reverse Iran's march to a bomb, and does a great deal to undermine the fragile, painfully achieved world consensus to impose sanctions.

"For the first time in nearly a decade, we have halted the progress of the Iranian nuclear program," Obama intoned. But we've seen this story unfold many times before, most recently with North Korea. Our eagerness for pieces of paper that can be brandished as "peace" trumps cold reality every time. Iran has slipped the sanctions' nooses. It will soon become a nuclear power -- not despite our best efforts -- but with our tacit acquiescence. We will look back on this agreement with bitterness in the very near future.