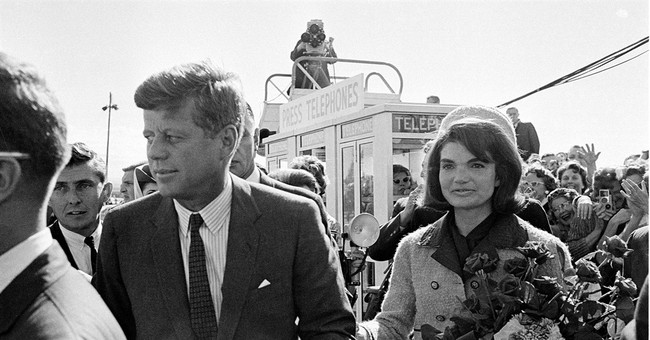 The 50th anniversary of John F. Kennedy's murder is being marked, not primarily by retrospectives on his life and accomplishments, and not by reflections on the myth versus the reality of his presidency, but instead by one of the features of our media age that is poisonous to our cultural health -- a macabre focus on the details of his murder.

National Geographic aired a film with the title "Killing Kennedy" (based on a book by Bill O'Reilly and Martin Dugard). Trailers featured images of the first couple in the open limousine and close ups of the actor who played Lee Harvey Oswald raising a rifle to his face and closing one eye. The movie "Parkland" likewise features a re-enactment of the fatal day Kennedy was shot, complete with descriptions of the president's "shattered head" when he reached the hospital.

CBS's contribution will put CBS figures front and center. "JFK: One PM Central Standard Time," will reportedly focus on "The story of two men forever linked in history -- Kennedy and CBS anchor Walter Cronkite, who delivered the tragic news to millions of TV viewers." Bob Schieffer will also get his opportunity to bask in the reflected gore with "As It Happened: John F. Kennedy 50 Years," during which Schieffer will reflect on the "fear and tension" in Dallas.

Still not sated with Kennedy's blood? You can tune into the Smithsonian channel for "The Day Kennedy Died," which will feature interviews with eyewitnesses. PBS's "Frontline" asks "Who Was Lee Harvey Oswald?" and devotes an hour to understanding the "enigmatic" man who killed the 35th president. The History Channel offers a "minute-by-minute" chronicle of Oswald's final days with "Lee Harvey Oswald: 48 Hours to Live."

There's much more, including specials on the Warren Commission, examinations of the conspiracy theories that have proved impossible to quell, and newly remastered Dallas police department audio tapes offering a "behind-the-scenes" account of the shooting's aftermath.

It "begins in 1959, at major turning points for both the future president and his assassin. John F. Kennedy ... is in Washington, D.C., preparing to announce his presidential candidacy, while Lee Harvey Oswald finds himself in the U.S. embassy in Moscow, renouncing his U.S. citizenship. These two events start both men -- one a member of one of the United States' most wealthy and powerful families, the other a disillusioned former Marine and Marxist -- on a cataclysmic track that would alter the course of history. Throughout (the film), we see their highs and lows, culminating in not one but two shocking deaths that stunned the nation."

One character enters history by serving his country and being gravely wounded in the U.S. Navy, winning a Pulitzer Prize (however dubiously), becoming a U.S. senator, and running for and being elected president. The other character -- given equal billing in this account of a great historical event -- achieves immortality by committing murder. We get "two shocking deaths."

The power of media saturation is difficult to overstate. A recent Wall Street Journal piece by Ari Schulman focuses on research showing that rampage shooters are highly motivated by the desire to achieve attention and fame through their shocking massacres. They often intend to kill themselves at the conclusion of their shooting sprees but hope to get the media to report their names and publicize their grievances. Schulman recommends that the press consider guidelines originally promulgated in 2001 by the Centers for Disease Control and Prevention, the National Institute of Mental Health, and the surgeon general. These include never reporting the names of mass shooters, never speculating on their motives (and certainly never reproducing their manifestos), and never broadcasting images of the crime. The "breaking news" wall-to-wall coverage of these grisly atrocities gives the twisted perpetrators exactly what they seek.

The morbid focus on JFK's assassination -- particularly those programs that stress the "two stories" angle -- send exactly the wrong signals to unstable minds. The rifle, the close-ups, the music, the drama. It all screams, "This is the way, if not to glory, at least to notice."