Primer From a Conservative Winner 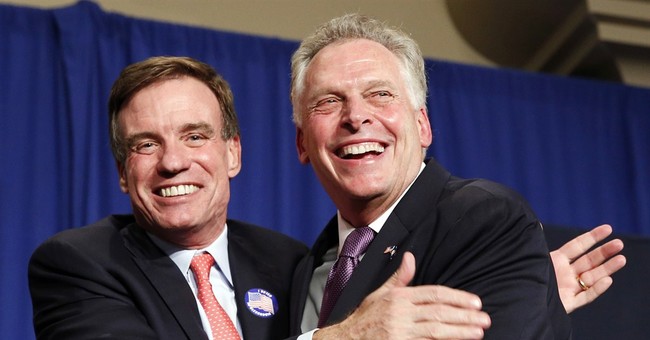 The most alarming message for Democrats from Tuesday's elections was the near obliteration of Terry McAuliffe's lead over Ken Cuccinelli in Virginia. An October poll, conducted a week after the government reopened, had placed him 11 points ahead. On Election Day, Cuccinelli lost by only 2.5 points. McAuliffe's precipitous tumble was caused entirely by Obamacare.

There was bad news for Republicans, as well. The government shutdown damaged Cuccinelli, possibly costing him the race. But there were other factors; the money gap (he was outspent 3 to 1), outgoing Republican Gov. Bob McDonnell's ethics troubles and Cuccinelli's dour mien all made it possible for a gasbag Democratic moneyman who admitted that he didn't read legislation and would hire someone to handle such trivia to take Thomas Jefferson's seat in Richmond.

Yet in Virginia's 34th District, just outside Washington, a very conservative delegate was able to run between 8 and 18 points ahead of Cuccinelli and win. And that was a district that went for Tim Kaine for senator and Barack Obama just a year ago.

Barbara Comstock is as conservative as any right-winger could desire -- pro-free enterprise, pro-life and pro-Second Amendment. Her opponent, Kathleen Murphy, a doctrinaire liberal, was supported by the unions, Michael Bloomberg, NARAL and Planned Parenthood.

If conservatives want to win elections and not just preen about their ideological purity, they should study Comstock.

How can conservatives cope with the "women's issues" that are handing Democrats huge percentages of the female vote? Comstock is not furtive about her opposition to abortion. At a debate the week before the election, she spoke affectionately of her son-in-law's birth mother and of her "courageous and loving" decision to place him for adoption. She also took a page from Louisiana Gov. Bobby Jindal's book and endorsed making birth control pills available over the counter as the American Congress of Obstetricians and Gynecologists recommends. It's hard to paint her as someone who wants to keep women barefoot and pregnant when she advocates making birth control pills easier to obtain. Her opponent opposed this.

Comstock fought back aggressively when Murphy accused her of opposing funds for cancer screening. (This smear was used against a number of Virginia Republicans this year.) Comstock pointed out that Murphy was referring to a Democratic legislative effort to pull cancer screening funds from the health department and turn them over to Planned Parenthood.

Comstock authored legislation to ease telework (traffic congestion plagues her region), to require competitive bidding on state transportation projects (unions were unhappy, but taxpayers saved $400 million), to curb human trafficking and to provide more in-state slots at Virginia colleges. She sponsored legislation on Lyme disease and joined efforts on all-day kindergarten programs and instant background checks for gun purchasers. Why those? Because her constituents requested them. "You're supposed to be serving them," she notes, "not the other way around."

Government agencies usually spend all available funds at the end of the fiscal year rather than return money to the treasury. McDonnell passed legislation offering state employees a 3 percent pay bonus if they could identify savings in their agencies. It was a win-win; state employees got a raise, and taxpayers got less spending. Comstock suggested applying the same principle to schools -- with the surprising approval of the teachers union. "Lots of teachers are in favor of eliminating 'curriculum specialists' and other bureaucrats," she notes.

Comstock finds common ground where it won't compromise important goals or principles. She founded a Young Women's Leadership Program for middle- and high-school students and invited a number of leading Democrats, including Donna Brazile, as well as Republicans, including Kate O'Beirne, to share their experiences and advice.

People expect their state and local governments to take care of things such as roads, bridges, congestion, schools and public safety, she explains. One of her mentors is former Indiana Gov. Mitch Daniels, who, among other reforms, reduced wait times at the Bureau of Motor Vehicles from hours down to an average of seven minutes. It was a symbol of efficiency and good stewardship.

Comstock doesn't believe in "putting sticks in the eyes" of her opponents. She fights false accusations aggressively, but she smiles whenever possible and offers concrete accomplishments that make her constituents' lives easier. Virginia is more conservative because its House of Delegates has such a smart and savvy member. She hasn't compromised her principles. She is not a sellout, a squish or a RINO. She's something all Republicans should aspire to be -- a winner.