Brown Shirts at Brown U? 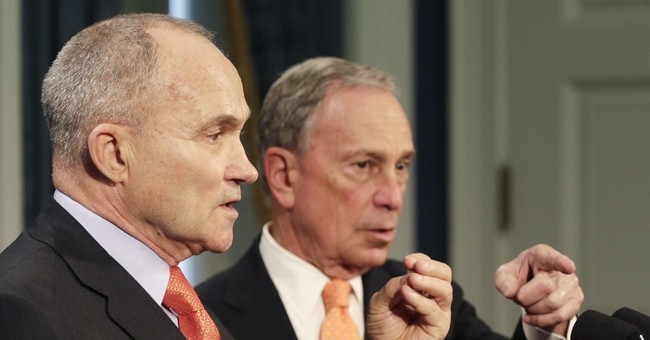 When New York City's strikingly successful police commissioner, Raymond Kelly, arrived to address students at Brown University, he was harassed, booed and heckled for 30 long minutes. "Racism is not for debate," they shouted. A university official pleaded with the goons, er, students to permit Kelly to speak, reminding them that they would be free to express disagreement during the Q-and-A session afterwards. "Shout him down!" responded a man in the audience, and the crowd did.

Episodes like this are tolerated in America because college faculties, administrators and the press almost uniformly share the students' prejudices and haven't the spine or the integrity to uphold boring American values like free expression. Brown's president issued a wan apology noting that it was a "sad day" for the university, but there were no suspensions or other punishments for those who organized and carried out this thuggish intimidation. Instead, the university will convene "a forum for the campus to discuss our values and expectations as a community." That'll help.

These outrages get noticed in the conservative press and largely ignored by others. It goes without saying that such tolerance for intolerance would not prevail if conservative students behaved this way toward, say, an advocate of same-sex marriage.

Members of the press indulge left-wing students, imagining that their hearts are in the right place, even if their heads are a little hot.

Is that really true? Consider that Kelly has presided over a policing regime in New York City that has resulted in poor and minority neighborhoods seeing victimization drop to levels not seen since 1963. New York's crime rate is the lowest among big cities in the United States. The most dangerous neighborhoods, which are majority black and Hispanic, have seen the greatest improvements in quality of life.

As Kelly noted on "Meet the Press" last summer, during the past 11 years, there have been 7,363 fewer murders than during the preceding 11 years. Based on victimization patterns in New York, that means there are about 7,000 more black and Hispanic young men alive today than would have been the case absent Kelly's leadership. The homicide rate for Chicago teens, for example, is four times that of New York.

Self-styled "activists" such as those at Brown (along with Al Sharpton, would-be mayor Bill de Blasio and the federal judge who ruled "stop and frisk" unconstitutional) claim to speak for the poor and minorities. But who speaks for the majority of law-abiding blacks and Hispanics bullied and harmed by criminals in their housing projects and neighborhoods? As Heather Mac Donald of City Journal points out, "the per-capita rate of shooting in Brownsville, Brooklyn, is 81 times higher than in Bay Ridge, which explains the why the stop rate in Brownsville is 15 times higher."

Mac Donald urges doubters to speak to people like Ivan De Bord, who acknowledges that he was himself stopped by police many times when he was younger. He's now an apartment superintendent in the South Bronx. De Bord welcomes police attention to his building, to keep at bay the gang who colonized the lobby, "smoking (weed), selling drugs, peeing everywhere, not respecting people, playing dice. It's very bad."

It's so easy and, frankly, cheap for Brown students to fancy themselves more enlightened and compassionate toward minorities than Ray Kelly. Most of them come from upper middle class communities. Only about 15 percent of Brown students get Pell grants, for example, which are awarded to students from low-income households. According to The Brown Daily Herald, about 44 percent of the 2012 class received financial aid, meaning the other 56 percent managed to pay the roughly $55,000 yearly fee out of pocket.

Even many of the minority students at places like Brown are not from poor families. A study in the American Journal of Education found that a significant percentage of black students at highly selective institutions were from middle-class immigrant families.

Brown, like other highly selective schools, is dominated by students who've never had to look over their shoulders on their walk to school, worry about whether the drug dealer on the corner is armed, or cower in their apartments for fear of gangs.

Ray Kelly has dramatically improved the lives of poor and minority New Yorkers. That he should be shouted down as a racist is ignorant and fascistic. That Brown tolerates this -- however sadly -- is contemptible.