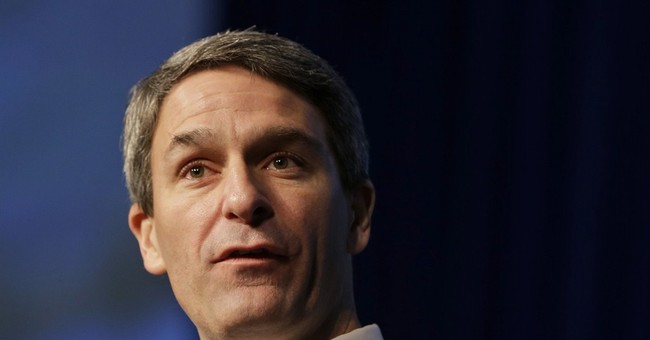 Republicans and conservatives are clearly in the mood for a fight. That martial spirit is part of what has brought us to the standoff in Washington.

It's odd then, that the battle for the governor's mansion in Virginia, which pits a solid conservative attorney general against a Democratic moneyman and back-scratching liberal Clinton pal, should be so neglected. Ken Cuccinelli is currently being buried in campaign spending by Terry McAuliffe. McAuliffe, who may not know much about Virginia, or about how to govern a state, but who certainly knows how to raise money, is outspending Cuccinelli two to one.

The race had been tight, with a slight edge for McAuliffe, until the government shutdown. Virginians oppose the shutdown (which the majority blame on Republicans) by 62 to 31 percent. Among those who dislike the shutdown, 64 percent support McAuliffe, while only 16 percent support Cuccinelli. A Politico poll shows McAuliffe with a 9-point lead.

Cuccinelli may have entered the race with another handicap inflicted by his fellow Republicans -- the gift scandal that has dogged Gov. Bob McDonnell. Both of those weights must be borne. The most Cuccinelli can do about these unforced errors is to attempt to distance himself from a sitting Republican governor and the Republican majority in the House of Representatives -- not exactly a politician's ideal posture. (Cuccinelli has been critical of the government shutdown, but McAuliffe is running ads linking him to Texas Sen. Ted Cruz.)

Does that mean it's over? Hardly. The race for governor in Virginia should be turning on Obamacare, debt and McAuliffe's ethical problems. Instead, McAuliffe has succeeded in making it about birth control.

Because Cuccinelli is pro-life, McAuliffe has been running ads suggesting that legislation he once backed would grant "personhood" to the unborn in Virginia and would "outlaw" contraception. The ad opens with an image of a package of birth control pills. A voiceover intones:

"These are birth control pills. More than half of American women use them at some point in their lives. But Ken Cuccinelli sponsored a bill that could have made common forms of birth control illegal, including the pill."

This is preposterous. The purpose of personhood laws was to protect unborn babies from abortion and to ensure that babies "accidentally" born alive following an unsuccessful abortion would be treated as human beings with full rights. They are not remotely aimed at contraception.

According to the Guttmacher Institute, the four most commonly used forms of birth control, accounting for more than 80 percent of the methods used, are the pill, tubal ligation, male condoms, and vasectomies. All of these prevent conception. Birth control pills work by preventing ovulation. Only a tiny fraction of contraceptives in use even conceivably (forgive the pun) involve inducing a miscarriage.

It's impossible to gauge how much of McAuliffe's 24-point advantage (according to a Washington Post poll) among women voters is attributable to these false ads. Women tend to be more liberal than men, and, as the bumper sticker has it, they vote. In every national election since 1984, women have turned out in larger numbers than men (and they are a numerical majority to begin with). It would certainly seem that Cuccinelli must rebut the contraceptive accusation if he hopes to gain ground.

If Cuccinelli were able to set the terms of debate -- say, by the infusion of cash from Republicans nationwide -- he might be able to highlight McAuliffe's ethical troubles. One of his ventures, Green Tech, is under investigation by the Securities and Exchange Commission. It seems that with the help of Hugh Rodham, (Mrs. Clinton's brother), Green Tech was able to get special help from the Department of Homeland Security in securing visas for big investors. McAuliffe's specialty is in knowing the right people.

It's not the first time his questionable business dealings have come under investigation. In the late 1990s, two officials of the International Brotherhood of Electrical Workers were investigated by the Department of Labor for a deal with McAuliffe and required to reimburse $5 million to the union's pension fund.

This week, Rhode Island media are reporting that McAuliffe was one of the investors in a fraudulent annuity scheme that stole the identities of terminally ill patients. McAuliffe explains that he was a "passive investor." Perhaps true, but trouble seems to follow him as the sparks fly upward.

McAuliffe is an enthusiastic booster of Obamacare and would sign Virginia up for the Medicaid expansion. Surely Republicans can do something with this? Anyone for a contest that is winnable?