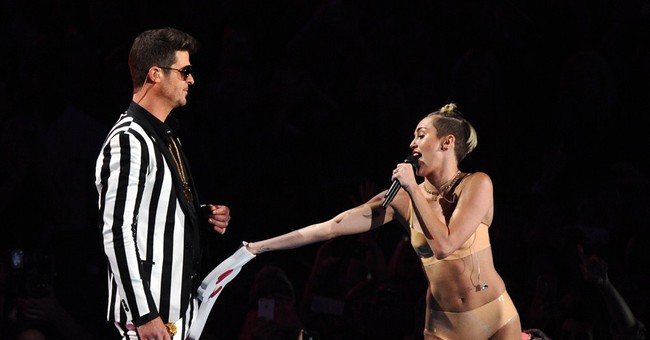 Some defenders of Miley Cyrus' VMA performance don't understand what all the outrage is about. Justin Timberlake tweeted, "She's young. Take it easy on her." Lena Dunham worried about "slut shaming." Russell Simmons wrote "Just saw @MileyCyrus. What did I miss. She was having fun. #twerkmileytwerk." And Adam Lambert tweeted " ... Listen if it wasn't ur cup of tea -- all good but why is everyone spazzing? Hey -- she's doin something right. We all talkin."

Cyrus seemed to endorse Lambert's any-attention-is-good-attention rationale. She boasted on Twitter that "Smilers! My VMA performance had 306.000 tweets per minute. That's more than the blackout or Superbowl! #fact."

Doubtless if Cyrus had undressed completely and performed a literal (rather than pantomime) sex act on stage, her Twitter numbers would have been even higher. Ditto if she had twisted the head off a small animal or defecated live and in color. A product of the celebrity culture, she seems incapable of making judgments based on anything higher than buzz. If she did either of those things, would Lambert wonder why everyone was "spazzing," and would Dunham condemn "slut shaming"? It's hard to say.

How many of Cyrus' young fans will interpret her behavior as a normal part of growing up? How many will confuse lasciviousness with sexual maturity?

Meghan Cox Gurdon, The Wall Street Journal's wise children's book reviewer, noted in a recent Hillsdale College speech that there is a vein in "young adult" fiction of ugly, horrific and sexually revolting material aimed at kids between 12 and 18. Girls cut themselves with razors until their bellies are a "mess of meat and blood," and boys don magic glasses that reveal "impaled heads and other black-rot body parts: hands, hearts, feet, ears, penises." The authors and publishers justify these themes as "heartbreakingly honest."

The subversives who undermine good taste always seem to invoke "honesty" or "reality". But as Gurdon rightly objects: "Books tell children what to expect, what life is, what culture is, how we are expected to behave -- what the spectrum is. They form norms ... And teenagers are all about identifying norms and adhering to them."

No one who has ever observed a group of 15-year-old girls -- nearly identical in their hair styles, clothes and speech -- can doubt this.

Miley Cyrus became a sensation as "Hannah Montana," a wholesome Disney pop star. Millions of pre-teen girls adored the show and followed Cyrus' career. She is hardly the first celebrity to attempt to shock her audience by shedding her ingenue image. Britney Spears, Lindsay Lohan and others have plowed this ground. But Cyrus did more than cast off her innocence. She used innocence itself as a lecherous come on.

Cyrus, 20, began her vulgar dance by appearing in a teddy bear costume with dancing teddy bears as back up. She later exchanged this for a flesh-colored bra and panties and a large foam finger that she put to lewd uses.

The existence of the Internet has probably already eroded some of the shame that pedophiles once felt. Learning that hundreds of thousands of others share one's perversion must be cathartic.

But how much more liberating to see the themes of child sexual abuse portrayed approvingly at the VMA awards?

American popular culture continues to prove that there is no rock bottom, and everyone who shrugs that it's no big deal is a little bit complicit.