Scotland the Brave No More 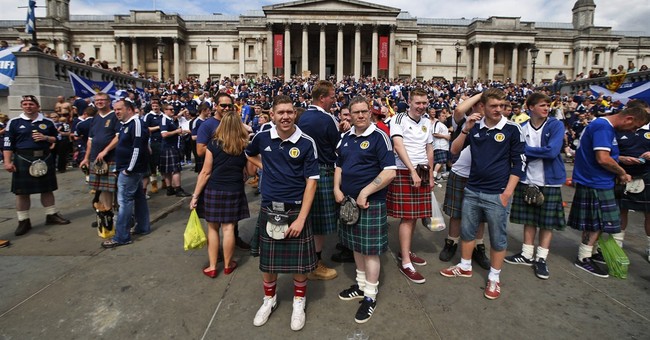 In Duck Soup, one of the stuffy characters responds to Groucho's raillery with the protest: "I didn't come here to be insulted!" to which Groucho quips "Oh really? Where do you usually go?"

I went to Scotland. Don't misunderstand, the Scots were delightful hosts -- friendly, accommodating and, of course, a delight to the ears. The country is as beautiful as advertised, and the castles, museums and lochs live up to their billing.

But a few days in Edinburgh during the "Fringe" festival is enough to bury images of thistles and bagpipes very deep. The two links to the Scotland of legend are the enduring Anglophobia (the country will vote on independence in September 2014) and the fondness for whiskey. A nation of 4 million people boasts more than 100 distilleries and the cocktail hour seems to be interpreted most liberally.

But modern Scotland is deep-dyed in socialism. The Scottish parliament, revived in 1998 in the hope that a measure of self-rule would vitiate the independence movement, is dominated by parties of the left. The Scottish National Party, which favors (in addition to separation from England) "free" education through university, unilateral nuclear disarmament, steeply progressive taxation and the "eradication" of poverty, holds 65 of 129 seats. Labour, the Liberal Democrats and a couple of green parties hold 47 seats, while the conservatives claim just 15. Of the 51 members of the House of Commons representing Scottish constituencies, exactly one is a conservative.

Now, about the "Fringe." It's a festival of performances, concerts, dance, circuses and street theater that dominates the city every August. My family was open to sampling (the younger members more experimental than the older). But just based on the descriptions available in the local paper, The Scotsman, many of the offerings were repellent.

We could have seen a play titled, "The Radicalisation of Bradley Manning," which the Scotsman described as a "shocking indictment of the brutal and relentless homophobia of U.S. military life" and also a "more subtle critique ... of western culture ... that reacts to any breach of discipline or convention with a fierce, repressive violence, and a demand that we all conform, or be silent."

Alternatively, we could have dropped in on "Bin Laden: The One Man Show" that featured a "well-spoken Englishman politely offering tea and biscuits to his audience." The play presents a "different truth, a version we never get to see, free from projection, indoctrination and cartoon villainy." Cartoon villainy? Has anti-Americanism so distorted the moral reasoning of the playwright and the critic?

"Bonk!" provided audiences with "serious and rather stomach-churning anatomical detail," as well as a faked female orgasm to "knock Meg Ryan into a cocked hat." "Nick Helm: One Man Mega Myth" boasts an "amazing set involving 13 London buses (to scale)" and "giant penises (not his own)." Well, that's presumably because they couldn't book Anthony Weiner.

Why don't you guess what the play "The Extremists" is about? The Taliban? The Shining Path? Al-Qaida? No, the audience meets "Norman Kreeger, author of Extremism in the 20th Century and Beyond." He's a guest on a TV chat show, where he expounds his "philosophy of free-market democracy and the necessity of the war on terror." He "almost persuades you that there is an enemy out there ... the only thing is, the more he and the TV anchor explain their beliefs, the more they become indistinguishable from the enemy they claim to share so little with."

"Eastend Caberet: Dirty Talk" is described as "delightfully dirty as ever." The female star kicks off her stiletto heels and crawls through the audience, dragging men on stage to "share their dance moves and sex noises."

We've come a long way from the "bonnie, bonnie banks of Loch Lomand."

American writer David Sedaris is on hand to share his fiction. One story, "I Brake for Traditional Marriage," features a character so outraged by a gay marriage bill that he "shoots his wife and daughter before stabbing his mother-in-law with an ice pick and driving into a pedestrian." What was that about cartoon villainy?

This is not to single out the Scots. The leftist tripe and cultural waste they're enjoying is available in every western capital, including our own. The difference, while there still is one, is that the relentless leftism goes almost entirely unrebutted there.