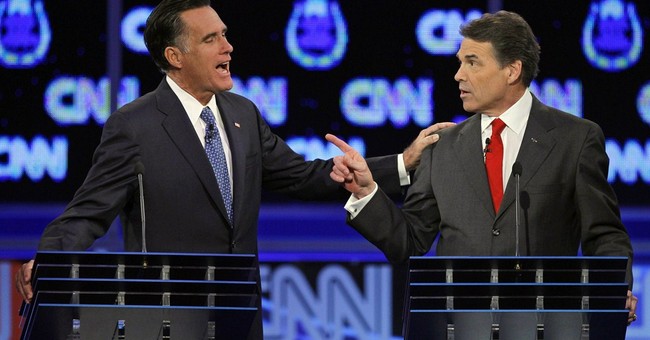 Trending
What was the worst moment of the 2012 presidential race? Was it Donald Trump's slow-motion striptease about entering the contest? Michelle Bachmann's invocation of "government needles" being "pushed into innocent girls"? Was it Newt Gingrich's promise to fund "American" lunar settlements by 2020? (I called them "Newtist colonies on the moon.") Obama's Joe Soptic commercial accusing Romney of causing a woman to die of cancer? Romney's 47 percent comment revealed? Perry's brain freeze? Joe Biden's warning to a black audience that Republicans want to "put y'all back in chains" or his foaming-at-the-mouth debate performance?

Feeling inspired at the pageant of American presidential politics? The question some Republicans and conservatives are asking is whether there is a way to avoid these banana-peel slips next time. Democrats have made their share of embarrassing mistakes, too (as partially noted above), but the dismaying reality is that Republicans have lost the popular vote in five of the last six presidential contests. Some, including RNC chief Reince Priebus, are seeking structural fixes. Does the prolonged fundraising and primary process cause us to wind up with second-rate candidates who don't represent the Republican grass roots very well and cannot win general elections?

Jeffrey H. Anderson and Jay Cost believe so. Writing in the summer issue of National Affairs, they argue that the current primary system arose by "accident and afterthought." It was actually designed by the Democrats -- an effort by the New Left to subvert the power of big labor, southern pols and big-city mayors (the figures who occupied the storied "smoke-filled rooms"). Hubert Humphrey became the Democratic candidate in 1968 without entering a single primary. The reformers proposed more caucuses, which could be dominated by activists. The old guard pushed back with demands for primaries. They compromised on a combination of the two. Republicans basically went along for the ride, agreeing to hold their own caucuses/primaries on the same day for convenience.

The result is a carnival that is absurdly lengthy and demanding. Serious candidates commit to no less than two years of full-time fundraising and campaigning. This ridiculous schedule virtually excludes candidates who have important jobs (governors, cabinet secretaries) and offers unfortunate advantages to the independently wealthy or those with connections to the wealthy and to the new mandarin class -- the consultants.

Anderson and Cost argue that "the current mess" also affords a frolic for fringe candidates with no money and no reasonable chance of success to indulge vanity campaigns that elevate their profiles while diminishing the process as a whole.

The endless string of debates, presided over by the liberal press, also lays traps for Republican candidates and draws the campaign away from issues Republicans care about.

Anderson and Cost propose to scrap the system entirely in favor of a new nominating process. The proposal is detailed and carefully crafted, but the broad outlines are that Republicans nationwide would choose delegates to a nominating convention around Feb. 12 of an election year. Through a series of votes with a point system, five candidates would be chosen to compete for the nomination. The five would debate each week for the next month, with moderators chosen by the Republican Party. After the fourth debate, one-third of the states would hold a primary (the order of states would alternate every four years). Some candidates might then withdraw. A fifth debate would be held, followed by another primary of one third of the states and then a final debate followed by a primary of the remaining states. If no candidate earned more than 50 percent of the delegates, a run-off would be held in May.

The writers believe such a system would revitalize local Republican parties, marginalize the hostile press, permit strong candidates to emerge as the choice of the grassroots, eliminate the tremendous waste of money the long primary campaigns require freeing more funds for the general election (where Democrats have consistently outraised Republicans in recent years) and reduce the intra-party bloodletting that arguably damages the Republican image.

There's a great deal to chew on in the Anderson/Cost reform, only briefly summarized here. Their system would clearly repair some of the troubles Republicans have recently experienced and might inject some enthusiasm into the process. Whether it would succeed in overcoming the party's handicap connecting with a majority of voters is less clear. That depends entirely on gifted politicians framing issues. The authors believe these reforms would make it easier for such candidates to emerge -- and that's worth serious consideration.