How Obama Gets Us to Forget His Failure in Afghanistan 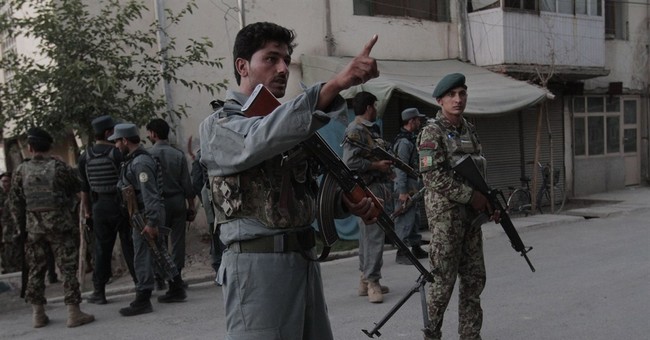 In the course of his rambling monologue on national security policy delivered at the National Defense University, President Obama gave only glancing attention to the most significant military undertaking of his term in office -- the Afghanistan war.

The president scarcely ever mentions Afghanistan except to note that Bush's war there was "paid for with borrowed dollars." The word Afghanistan is nearly always mouthed in the context of "winding down" or "ending" our commitment. And, of course, because Obama still cannot help himself, he again chastised his predecessor for supposedly "shifting our focus" and prosecuting a war in Iraq.

Perhaps Bush was wrong to go to war in Iraq. If so, Hillary Clinton, Nancy Pelosi, Harry Reid, Joe Biden and many other Democrats were equally mistaken. But President Bush at least knew what he was about in going to war. He made his case forcefully to the nation -- and the argument did not rest solely on Saddam Hussein's possession of WMDs. He aimed to transform Iraq and then the entire Middle East, preempting vicious states and terrorists from obtaining or using WMDs and offering to the oppressed populations of the region an opportunity for self-government. The eventual spread of freedom would undercut the malign appeal of extremists and would reverse decades of U.S. policy that had winked at Arab despotism. It was an idealistic, if in retrospect, unduly ambitious agenda (and I say this as someone who supported the war). But President Bush cannot be faulted for failing to grapple with the inevitable costs or risks of war.

Nor can it be said that President Bush permitted political considerations to affect his conduct of the war. Though the Pentagon and virtually of all official Washington seemed against the surge in 2006, the president went ahead -- and he was successful. Had it not been for Obama's signal failure to negotiate a status of forces agreement, Iraq would have been a success for the U.S. Instead, the prospects for a stable, western-oriented state in Iraq become less likely with every passing day.

President Obama doesn't want us to notice, but he prosecuted his own war in Afghanistan. It was a "war of choice." He surged 33,000 troops to the country to risk and sometimes lose their lives between 2009 and 2010, and then he looked the other way. Against common sense (and the advice of his generals), he accompanied his announcement of the surge with a date for its conclusion. It was an engraved invitation for the Taliban to wait us out and for our allies on the ground to make the best deal possible with the enemy. It was also an invitation for Americans to lose their lives in vain.

The president declined to send the number of troops his generals recommended. He explained that the surge was designed to "break the Taliban's momentum" -- hardly a rousing war aim. Lest anyone be in any doubt about his eagerness to escape his own war, he said in August of 2010, "Next July we will begin a transition to Afghan responsibility. ... This transition will begin because open-ended war serves neither our interests nor the Afghan people's." In 2012, the NATO command in Afghanistan reported that insurgent attacks were down by 5 percent over the previous year but still well above 2009 levels. So much for even the tepid goal of halting momentum.

Why did President Obama order the surge? Was it to validate his campaign rhetoric about the good war? David Sanger of The New York Times reported that Obama "concluded in his first year that the Bush-era dream of remaking Afghanistan was a fantasy. ... So he narrowed the goals ... and narrowed them again, until he could make the case that America had achieved limited objectives in a war that was, in any traditional sense, unwinnable."

Where then was his conscience when he sent thousands of young Americans to fight and die for something he believed unwinnable? More than 1,500 Americans have died in Afghanistan since Obama became president (more than 3 times the number killed in Bush's eight years). For what cause did they die? What did Obama achieve? And why does no one care about the outcome of Obama's war?