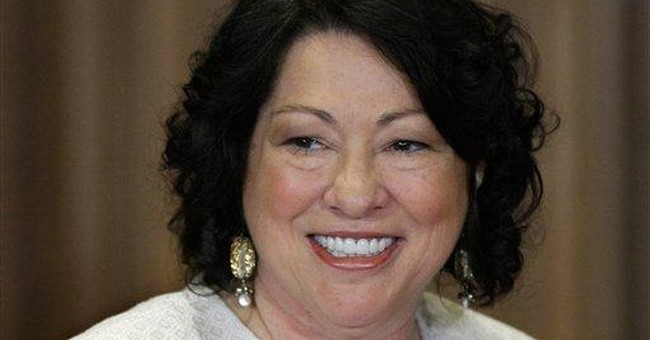 While disclaiming an "abortion litmus test," President Obama has signaled his intention to appoint a new Supreme Court justice who shares his concern for "women's rights." In other words, of course there's a litmus test -- and it would be foolish to suppose that abortion is the only one.

If there were any justice in the justice-picking sweepstakes, the president would choose a conservative -- to correct a historic anomaly. Though Republican presidents appointed 17 of the last 23 justices, only 11 turned out to be anything close to conservative. Some, like William Brennan (Eisenhower), David Souter (Bush I), and John Paul Stevens (Ford), were leading liberals. Others like Sandra Day O'Connor (Reagan) and Anthony Kennedy (Reagan) became swing votes, leaning left on key issues. Not since Byron White (Kennedy) has a Democratic appointee leaned to the right to any significant degree. Surely Obama can see that this imbalance should be remedied by "spreading the wealth around."

Seeking a model, he need look no further than Justice Samuel Alito. The lone dissenter in the recently decided case of set ital United States v. Stevens end ital, Alito demonstrated the sort of sound logic and good sense that should be prized in a justice -- as well as the willingness to stand alone, which, even in the rarefied environment of the Supreme Court, cannot be easy.

The case concerned a federal statute that criminalized the creation, sale, or possession of certain types of animal cruelty videos. It was aimed at so-called "crush videos," a subset of pornography that appeals to a level of depravity that makes some of us want to resign from the human race. Alito quoted from the Humane Society's brief:

"(A) kitten, secured to the ground, watches and shrieks in pain as a woman thrusts her high-heeled shoe into its body, slams her heel into the kitten's eye socket and mouth loudly fracturing its skull, and stomps repeatedly on the animal's head. The kitten hemorrhages blood, screams blindly in pain, and is ultimately left dead in a moist pile of blood-soaked hair and bone."

The majority held that the statute was "overbroad" -- that depictions of hunting or legitimate slaughtering methods might easily fall within its purview -- and accordingly unconstitutional. (Though the court did virtually invite revised legislation, noting that "We ... do not decide whether a statute limited to crush videos or other ... extreme animal cruelty would be constitutional.")

Alito dissented. He dispatched the hunting example by noting that hunting is legal in all 50 states, while the statute referred to "a depiction of conduct that is illegal in the jurisdiction in which the depiction is created, sold, or possessed." Further, depictions of hunting would clearly fall within several of the exceptions -- "serious religious, political, scientific, educational, journalistic, historical, or artistic value" -- enumerated in the legislation.

As to tail docking and slaughtering methods, Alito advises that since the statute could only reasonably be interpreted as criminalizing depictions of animal cruelty as defined by state and federal law, and since those practices did not qualify, a video depicting them would not be within the law's scope. Further, a trade video showing slaughtering methods would easily fall within the range of the law's exceptions.

It is the same with dogfighting. "'(V)ideo documentation is vital to the criminal enterprise because it provides proof of a dog's fighting prowess -- proof demanded by potential buyers and critical to the underground market.' In short, because videos depicting live dogfights are essential to the success of the criminal dogfighting subculture, the commercial sale of such videos helps to fuel the market for, and thus to perpetuate ... the criminal conduct depicted in them." The dogs abused in these videos suffer for years, Alito wrote, not just minutes. They are commonly fed hot peppers and gunpowder, beaten with sticks to incline them toward violence, and denied treatment after a ferocious fight.

The majority's stretch to imagine hypothetical scenarios in which the statute might infringe other speech seems farfetched compared with Alito's more realistic analysis. But wisdom is not determined by majority vote.