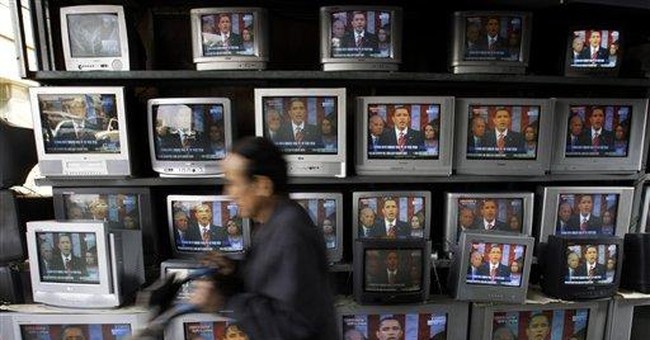 The perennially optimistic strained to find evidence of a new centrism in President Obama's State of the Union address. Well, the Hyde Park liberal embraced nuclear power, they say. And he did seem to.

It's a nice sentiment. The Nuclear Energy Institute pronounced itself "delighted." But hold the champagne.

The other nuclear news this week is that the Obama administration's new budget will propose to zero out funding for Nevada's Yucca Mountain nuclear repository -- in effect, killing it. Instead, the Energy Department has announced the formation of a "blue ribbon" commission "to provide recommendations for developing a safe, long-term solution to managing the nation's used nuclear fuel and nuclear waste." It will consist of the usual blue ribbon members (Lee Hamilton, Brent Scowcroft, Susan Eisenhower) and produce an interim report in 18 months and a final report in 24. The commission will have 15 members and God knows how many staff, and accordingly, the costs will run into the millions.

American taxpayers have already invested more than $13 billion over 30 years to build the facility and make it redundantly safe. In 1982, the U.S. government agreed to begin accepting nuclear waste at the site in 1998. Failure to meet that deadline has already cost us $565 million in legal settlements and is estimated to run up to $11 billion over the next decade.

The Yucca Mountain repository is 1,000 feet underground in the most lifeless desert of North America. Its storage tunnels have been engineered to enhance the natural protective effect of thick rock by adding multiple layers of steel, titanium drip shields to prevent erosion, and other safety features to ensure that the waste (which becomes less harmful with the passage of time) will not leak.

How safe is it? Consider millirems, units of radiation. A cross-country airplane ride subjects travelers to 2 or 3 millirems (from cosmic rays). A dental x-ray yields 1 millirem. People who live in Denver get twice the dose (50 per year) as those who live at sea level. An earlier Energy Department study examined whether the Yucca containment facility could withstand normal aging, plus volcanoes and earthquakes. The conclusion was that it would emit no more than 1 millirem per year of radiation for 750,000 years!

But goodbye to all that. It wasn't safe enough for Sen. Harry Reid, D-Nev., who has worked to kill the Yucca facility. (Reid was not alone among Nevada politicians. Former Sen. Chic Hecht had memorably promised to oppose "nuclear suppositories" in his state.) And it was not safe enough for Barack Obama, who campaigned energetically in Nevada promising to terminate the project. In addition to zeroing out funding, the administration proposes to suspend the license application for the facility and withdraw it completely within the month.

Why are they wasting our time and money on a new blue ribbon commission to go over plowed ground? The administration hopes that the commission will reassure the nuclear industry that provision will be made for the waste. But when? In another 30 years? At the cost of another $13 billion or more?

There is nothing dishonorable about opposing nuclear energy -- though the greenies who claim that global warming is their chief worry have some explaining to do if they reject nuclear power -- but there is something dishonest about claiming to favor nuclear power while simultaneously short-circuiting the most viable solution to the problem of long-term waste storage.

They are wasting their time, squandering our money, and insulting our intelligence.