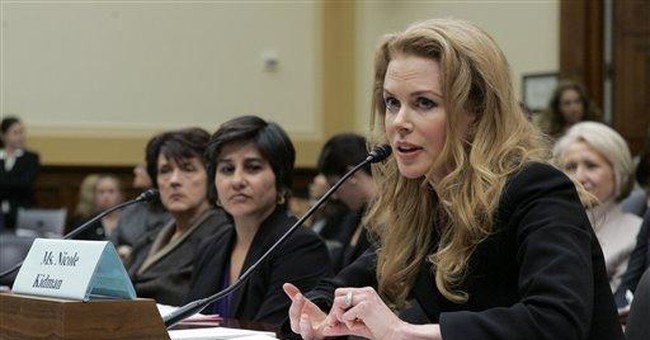 Maria Shriver's new report, "A Woman's Nation Changes Everything," has received a full dress media rollout. We are invited to examine the changes in women's lives over the past several decades and to deplore, as usual, the obstacles to full equality that women supposedly face. Published in cooperation with the Center for American Progress, "A Woman's Nation" claims to be reckoning with the new era but arguably fails to grapple with the most profound challenges to women (as well as children and men).

Some of what's in this report is a recycling of long-discredited data. Heather Boushey, for example, regurgitates the statistic that women only earn 77 cents on the dollar compared with men. But as the Hudson Institute's Diana Furchtgott-Roth and other economists have shown, this number conceals more than it reveals. It is only true on average. But when you begin to compare like with like, the discrepancies narrow considerably. Comparing men and women who both work 40 hours per week, for example, reduces the pay gap by 10 cents per hour. You have to look carefully at what is being compared. Among workers labeled "full time," hours worked by men tend to exceed hours worked by women. When men and women performing the same job are compared -- whether supermarket checker or first-year associate at a law firm -- the pay gap nearly disappears.

"A Woman's Nation" declares in one breath that the "war of the sexes is over" but in the next launches a broadside about women's educational opportunities. It requires some ingenuity to complain that women are educationally shortchanged, when, as even the chapter's author, Mary Ann Mason, acknowledges, "Women today receive 62 percent of college associate's degrees, 57 percent of bachelor's degrees, 60 percent of all master's degrees, half of all professional degrees (law and medicine) and just under half of all Ph.D.s." But there is a problem lurking beneath the surface of this evident success. Though they dominate higher education, too many women are still choosing "traditional female majors" like education, health care (including nursing), and psychology.

Some people look at these data and see free people making free choices. The report doesn't see it that way. Some unseen hand (the patriarchy?) is herding women students into psychology class and blocking their enrollment in engineering and computer science. Women shouldn't cluster in the "helping professions," the report complains, because those jobs don't pay as well as some others. That women may prefer these fields anyway is not considered. Yes, Mason admits, women choose fields that offer job flexibility so that they can fulfill family responsibilities. But that just shows how much the world must change to make these tradeoffs unnecessary.

The solution to the educational "problem," the report argues -- and here we come to the nub -- is more government action. "Our government has already started" to tackle these problems, the report chirps, through laws like Title IX. But Big Brother must do more! Title IX must be used "as a tool to level the playing field for women in the sciences, just as it has done successfully for sports." In other words, schools must be coerced into "equalizing" these programs or risk the loss of federal support.

There's so much for benevolent government to do. The U.S., the report laments, "is the only industrialized country without any requirement that employers provide paid family leave." Employers must be required by law to offer generous family leave, flexible working hours, and other benefits. The government must "increase support to families for child care, early education and elder care to help working parents cope with their multiple responsibilities." Would that be the same government that is already trillions in debt?

Hundreds of pages, lots of photos and charts, and it's the same old song. It completely misses the most important fact about modern women's lives -- the decline of family stability. And not just women's lives. The decline of marital stability and the rise of unmarried parenting (currently almost 40 percent of children are born to unmarried parents) has not only been a catastrophe for children, it has also made combining work and family harder than ever. Just at the moment women entered the workforce en masse, marriages -- so essential to providing stability to home life -- unraveled.

The solution, says the Shriver report, is for our "social insurance" programs to "recognize" how family life is changing and increase benefits for a range of domestic needs. See how it works? The more that families disintegrate, the more demands are made upon the government to step in to fill the gaps. That's a downward spiral from which there may be no escape.