Repeat After Me: Mothers Belong at Work 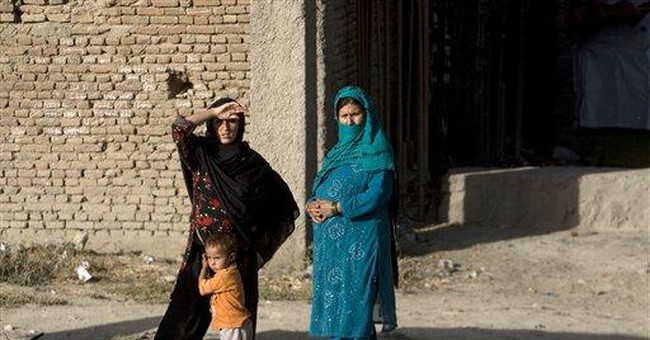 There is nothing that makes some members of the chattering class more jumpy than the idea that women may be choosing to stay at home with their children. Still evidently shaken by a 2003 New York Times piece on female Princeton grads who elected to stay home and raise children, the Washington Post let out a nearly audible sigh of relief as it headlined a story on Census Bureau data "Most Stay-at-Home Moms Start That Way, Study Finds: Many Are Younger, Less Educated, Hispanic."

Revealing the particular preoccupations of liberal land, reporter Donna St. George opens her story thus: "A first census snapshot of married women who stay at home to raise their children shows that the popular obsession with high-achieving professional mothers sidelining careers for family life is largely beside the point." Were you aware of this "popular obsession"? Nor I. The latest Census Bureau data show, St. George triumphantly reports, that "the profile of mothers at home ... is clearly at odds with the popular discussion ... of an opt-out revolution ... that has flourished in recent years." In fact, one in five mothers at home has less than a high school degree, compared with one in 12 mothers who work. And "Twelve percent of stay-at-home moms live below the poverty line, compared with 5 percent of other mothers." So there!

Well, OK. But we knew this, didn't we? We knew that women with lower levels of education and skills make the decision to raise their own children rather than seek a low-paying job that would barely cover the cost of childcare. That's not news, and it's not stupid either. And let's not overstate what the data show. Much of this is about as surprising as the sun rising in the east -- a higher percentage of mothers with an infant were stay-at-home moms compared with mothers of older children; 58 percent of stay-at-home moms had children under 5 compared with 43 percent of women in the workforce. Astonishing. On the other hand, there isn't a huge discrepancy between moms at home with a college degree (32 percent) and working mothers with a diploma (38 percent).

After 25 tendentious paragraphs hammering home (if you will) the notion that only losers stay home with the little ones, the story acknowledges this puzzling nugget: "In 1994, 19.8 percent of married-couple families with children younger than 15 had a stay-at-home mother. Last year, it was 23.7 percent."

Maybe there is something afoot after all? The research group Catalyst, devoted to advancing women's careers in business, found that 33 percent of women with MBA degrees are not working full time compared with 5 percent of men. Census data from 2002 showed that 36 percent of women with college degrees who'd had a child in the previous year were staying home, up from 32 percent in 1995. Attitudes seem to have shifted as well. A Pew Research Center poll in 2007 compared the attitudes toward work among mothers with children under 17. Whereas in 1997, 32 percent said they preferred full-time employment, 10 years later, only 21 percent did. "The decline in mothers saying full-time work is ideal for them occurred about equally among mothers with higher and lower education levels" the report noted.

When will the left side of the Mommy Wars stop beating their heads against reality? Aren't we mature enough to recognize that women place a high value on time with their children and that this affects their work lives? Is it so threatening to acknowledge that when women have small children at home, they are less likely to want an 80-hour-a-week job?

Perhaps the true source of anxiety about so-called "opt out" moms is that they tend to undermine a key liberal shibboleth; that the state must provide "quality" childcare in order to do justice to women. If even well-educated, high-earning moms who can afford the best daycare choose to stay at home instead, it rattles. Thus the high-profile reception of this Census report. But it proves absolutely nothing.