The AP's Decision To Exploit a Marine's Death 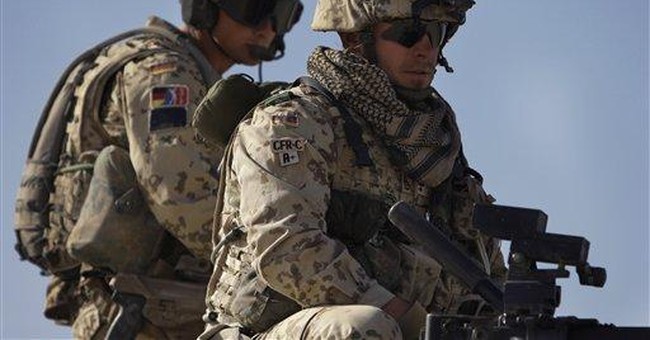 Arguably violating its embed agreement, the near universal press practice since 9/11, and the expressed wishes of the family, the Associated Press went ahead and published a photograph of mortally wounded Marine Lance Corporal Joshua "Bernie" Bernard, killed in action in Afghanistan. The AP also ignored the pleas of Secretary of Defense Robert Gates, who had implored the press agency as a "matter of judgment and common decency" not to publish the photo.

Bernard, 21, a devout Christian and Iraq War veteran from Maine, was described by his squad leader as "a true-heartedly very good guy ... probably one of the best guys I've known in my entire life." Bernard served as his unit's point man and navigator. He lost his life Aug. 14 when he was hit by a rocket-propelled grenade that blew off one leg and badly mangled the other. The AP photo captured Bernard lying on the ground, two buddies attempting to help -- a splash of red where one leg had been.

The AP's justification of its decision is both pompous and dubious. "Images of U.S. soldiers fallen in combat have been rare in Iraq and Afghanistan, partly because it is unusual for journalists to witness them and partly because military guidelines have barred the showing of photographs until after families have been notified." AP says it waited until after Bernard's funeral to publish the photo, but the same could have been done before. There must have been hundreds of mortal injuries and deaths captured on camera by war correspondents since 2001.

The AP contends on the one hand that "the stories and photos" of Lance Corporal Bernard "conform with military regulations surrounding journalists embedded with U.S. forces" but then reminds us that "Critics ... maintain some of the rules are aimed at sanitizing the war, minimizing the sacrifice and cruelty which were graphically depicted by images from the Civil War to Vietnam where such restrictions were not in place." Which is it? Is the AP defying the embed agreement because they are no longer willing to "sanitize" the war or are they simply publishing the first dead Marine photo they've ever laid hands on?

"AP journalists document world events every day," the statement continued. "Afghanistan is no exception. We feel it is our journalistic duty to show the reality of the war there, however unpleasant and brutal that sometimes is."

So the AP is acting as a brave truth teller forcing Americans to face the agony of war? Please. People are not so naive. That "war is hell," as Civil War general William T. Sherman put it, has been pretty well understood for centuries. But the defense secretary did not object to publication because he was hoping to shield Americans from the "reality" of war. He was hoping to spare one devastated family -- a family whose son had given the "last full measure of devotion" to his country -- from the pain of seeing his mutilated body in every newspaper in the country. "I cannot imagine the pain and suffering Lance Corporal Bernard's death has caused his family," Gates wrote.

"Why your organization would purposefully defy the family's wishes knowing full well that it will lead to yet more anguish is beyond me. Your lack of compassion and common sense in choosing to put this image of their maimed and stricken child on the front page of multiple American newspapers is appalling. The issue here is not law, policy or constitutional right -- but judgment and common decency."

Besides, as John Hinderaker of Power Line Blog reminds us, the AP's concept of "journalistic duty" is quite elastic. In 2006, when riots erupted in several Muslim countries over the publication of the "Muhammad cartoons" the AP declined to publish them, despite their undoubted news value, explaining that "we don't distribute content that is known to be offensive." It seems everything depends upon whom you are offending.

There is something else that the AP perhaps did not consider. While for them a photo of a mortally wounded Marine is testimony to the "brutality" of war; and while for the family it is "disrespectful" (the father's word); to America's enemies it is a triumph. There are no universal standards. Our enemies are known to carry videos of the beheading of Nicholas Berg on their cell phones. And for those who've forgotten, Nick Berg was a completely innocent American noncombatant. Joshua Bernard would want to be remembered as he lived and served. Instead, the photo of his last moments will doubtless go viral on Islamist websites, where his suffering will be exulted over.