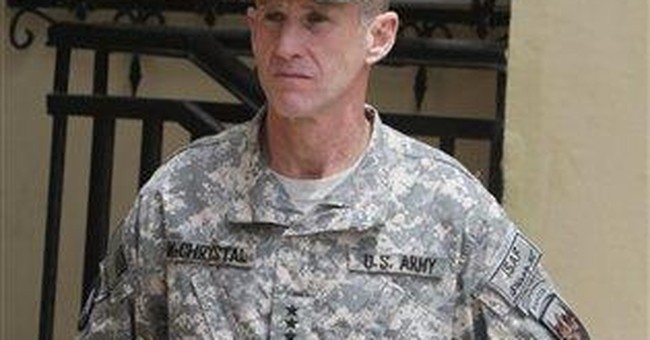 In 1980, after Soviet tanks rumbled into Afghanistan, President Jimmy Carter experienced an epiphany. The former Georgia governor, who in 1977 liberated the U.S. from its "inordinate fear of communism" and pecked Brezhnev on both cheeks, declaring that he and the Soviet leader "shared similar dreams and aspirations," was shocked by this naked aggression. "... The action of the Soviets," he admitted, "made a more dramatic change in my opinion of what the Soviets' ultimate goals are than anything they've done the previous time I've been in office."

Some people are slow learners. Leave aside the 20 million dead under Stalin, the subjugation of Eastern Europe, the Gulag, and the show trials. In just the previous decade, the Soviets had tried and jailed Natan Sharansky and Alexander Ginsburg for the crime of attempting to hold the U.S.S.R. to the Helsinki human rights agreement; imprisoned countless dissidents in psychiatric "hospitals"; supported a number of terrorist groups worldwide, maintained an elaborate disinformation campaign to spread defamatory lies about the U.S.; brought the world to the brink of nuclear conflict over the Yom Kippur War in the Middle East; and armed and supplied the deadly North Korean, North Vietnamese, Somali, and Ethiopian regimes.

The liberal tendency to believe that international relations are a form of social work is unchanged. Just as liberals like Carter believed in the 1970s that tensions with the Soviets were the result of misunderstandings and "paranoia" on our part, liberals today believe that international tensions are the result of lack of respect for Islam or bellicosity on our part. Liberals are keen to bolster the self-esteem of our enemies. If we were not so provocative (didn't Bush label Iran, North Korea, and Iraq the "axis of evil"?) the world would be a more tractable place. If we demonstrate humility, our former foes will meet us halfway.

Accordingly, Obama signaled in his inaugural address a new benign approach to Iran. Without naming the regime, he declared that the United States was prepared to "extend a hand, if you are willing to unclench your fist." Following up two months later, President Obama addressed the Iranian regime directly (something previous administrations had declined to do, though they often expressed their solidarity with Iran's people) in a Norwuz (New Year) address. "We know that you are a great civilization" he purred, "and your accomplishments have earned the respect of the United States and the world." Directing his next comments directly to the mullahs, the president continued "... in this season of new beginnings ... my administration is now committed to diplomacy that addresses the full range of issues before us, and to pursuing constructive ties among the United States, Iran, and the international community. ... The United States wants the Islamic Republic of Iran to take its rightful place in the community of nations."

As for the nettled matter of Iran's pursuit of nuclear weapons, President Obama addressed it soothingly in his Cairo speech. Every nation has the right to pursue nuclear power, he declared (though nuclear energy is apparently to play no future role in the U.S.) and "no single nation should pick and choose which nations hold nuclear weapons." Though he had previously declared that a nuclear Iran was unacceptable to the United States, President Obama proposed in Cairo that the answer to an Islamist bomb was "America's commitment to seek a world in which no nations hold nuclear weapons."

The Obama approach looks much less appealing following the sham election of June 12. The bromides and promises of respect look increasingly tawdry as the regime's goons speed through Iran's streets on motorcycles beating demonstrators with batons; as Internet sites are closed; as opposition leaders declare the election stolen; as dissidents including political leaders, students, and journalists are jailed; and as violence spills into the streets.

Just as the Soviets let the mask of "peaceful coexistence" slip when they invaded Afghanistan, the mullahs have revealed themselves for what they are. It has suddenly become much more difficult to pretend that by engaging with this junta, you are not betraying the Iranian people. The Obama foreign policy -- hope leavened with helium -- must now come down to Earth.