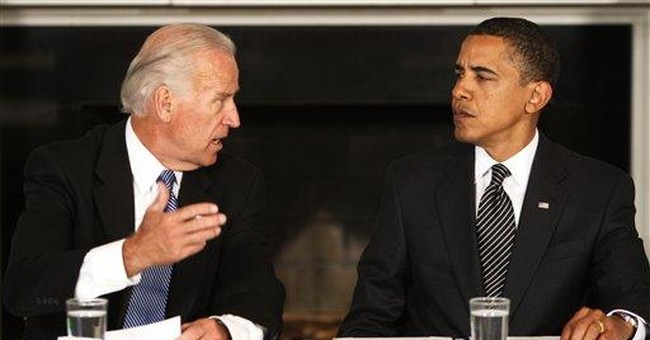 You might suppose that President Obama has his hands full running two wars, administering General Motors, "rescuing" the banking system, attempting to empower unions over management, hushing up whispers about hypocrisy regarding Guantanamo detainees, managing the mortgage crisis, imposing "clean energy" on the nation, handling nuclear North Korea and nearly nuclear Iran, "stimulating" the economy, reviving the "peace process" between Palestinians and Israelis, inaugurating a new relationship with Russia and with the Muslim world, and reversing the rise of the world's oceans, but no, he has one more agenda item -- overhauling U.S. health care.

The administration is hoping that a health bill will be voted on by early August, which may be overly optimistic but still means that this summer will be dominated by the health care debate. Its outcome will determine the overall success or failure of Obama's effort to torque America toward the European model of statism. It isn't just that the health care sector accounts for 17 percent of the U.S. economy. It is also the case that if enacted, a nationalized health service -- no matter how crushingly expensive or bureaucratic -- will vitiate arguments about the proper scope of government. All future pleas for reducing the size of the state will run into the accusation that the small government advocate is eager to take antibiotics from the mouth of a child or insulin from a diabetic.

Whereas the Clinton administration advertised the overhaul of American health care primarily as a means of covering the uninsured, President Obama is making the bolder claim that revamping health care is a way to save money. Really? Medicare is already the program that ate the government, scheduled to go into bankruptcy itself in 2019. As the trustees report put it, "while Medicare's annual costs were 3.2 percent of Gross Domestic Product (GDP) in 2008, or about three quarters of Social Security's, they are projected to surpass Social Security expenditures in 2028 and reach 11.4 percent of GDP in 2083." Or consider the Massachusetts health care reform introduced by Mitt Romney. Like every other government health care program, Romney's has vastly exceeded cost projections. Initially projected at $125 million per year, the program actually cost taxpayers $133 million in 2007, $647 million in 2008, $869 million in 2009, and could top $1.1 billion next year.

"Health care costs," President Obama intoned as he kicked off a summit on the subject, are "causing a bankruptcy every 30 seconds." Cord Blomquist on Openmarket.org observed that in 2008, a big year for bankruptcies, there were a total of 1.1 million bankruptcies. Adding up Obama's numbers -- 120 bankruptcies per hour times 24 hours in a day and 365 days in a year equals 1,051,200 bankruptcies per year -- would suggest that only 100,000 of those were for non-medical expenses. Does that make sense in the midst of a collapsing housing market? The study Obama based his numbers on was flawed in other ways as well, as ABC's Gary Langer posted on the ABC News website.

Beware of politicians bearing statistics. But what is even more galling than misleading (or outright false) statistics is to watch politicians rail about the expense of health insurance without once acknowledging their own role in jacking up the price. Health care is expensive of course -- though it also delivers value (improved quality and length of life). But our jerry-built system has made buying insurance much more expensive than it should be. State mandates require insurance companies to cover a variety of specialized medical services (usually at the behest of lobbyists for the relevant service providers) including: in vitro fertilization, marriage therapy, smoking cessation classes, hormone replacement therapy, chiropractor visits, and so on. That makes it impossible for companies to offer cheap, no-frills, high-deductible plans for the young and healthy. As Sally Pipes notes in "The Top Ten Myths of American Health Care" (Pacific Research Institute), there were only 252 mandates in force 30 years ago. Today there are 1901, an average of 38 per state.

Government involvement in the health care system, through mandates, reduced competition (such as forbidding shopping for insurance across state lines), and a skewed tax deduction that permits only employers and not employees to deduct the cost of health coverage, has made health care more expensive than it ought to be. Yet President Obama proposes that hair of the dog -- vastly more government involvement -- will bring down costs and improve quality.

If he follows the lead of Great Britain, Canada, or other systems he admires, he can definitely bring down costs. He can do it the way they have, by rationing care. But Americans should bear in mind this summer that when the president promises to get health care costs under control he is really promising less care. There is a better way. More competition, not less. More market discipline, not less. This will affect every American for generations to come. The stakes could hardly be higher.