What Was I Going To Say? 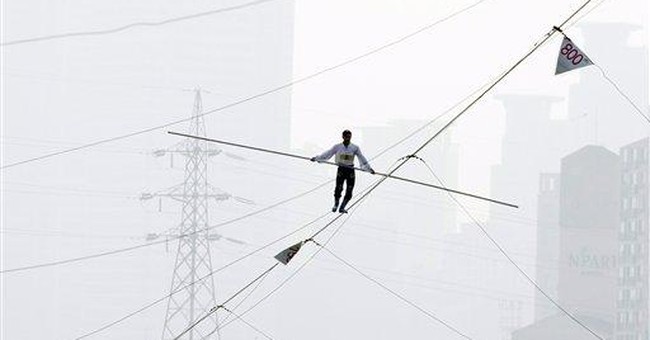 The Daily Telegraph brings welcome news -- "Old age begins at 27 as mental powers start to decline, scientists find." It seems that the University of Virginia conducted mental acuity tests on 2,000 adults over the course of seven years. The results: Your steel-trap brain is at its best around the age of 22. By the time 27 rolls around, you've already begun to depreciate.

Those of us who are well past 27 can smile smugly as the younger set takes in the fact of its relative senescence. A 30-year-old may feel pretty immune to the ravages of time, but aha! we now know that he or she is taking just a smidge longer to factor those square roots than someone fresh from college.

As someone who got her first gray hair at the age of 24, I've always been unusually conscious of time passing. This needn't be morbid. My junior high school French teacher had a sign on her desk that read "Wasted time is wasted life." Bearing that in mind can make you crazy or it can make you productive. It may have made me a bit of both.

Study or no study, most 27-year-olds will not perceive their creeping decrepitude. That comes later. About age 45, most adults notice big things, like their vision deteriorating. "It's the age when your arms get shorter," explained an ophthalmologist. I don't mind this. Before I had Lasik surgery I wore glasses anyway. It's not such a shock to need readers -- though vanity forbids doing the only sane thing, which is wearing them on a chain around your neck. I'd rather leave a pair in each room and spend time patting piles of papers in search of missing ones than look like Marion the Librarian.

Becoming far-sighted isn't so bad. Losing your short-term memory, however, is another matter. What was I saying? Oh yes, short-term memory. In the last several years I have forgotten countless appointments, addresses, events, and e-mail addresses. I laugh if someone tells me a phone number when I am without pen and paper. I have three calendars and a BlackBerry that rings to remind me of things and I still manage to screw things up. Bill Cosby recommends that when you forget why you entered a room, you simply back out and walk back in again. This sometimes works. I tell my family that my declining powers of recall are a boon to them as I can enjoy the same jokes over and over. This works less often. You must hone compensating skills, like searching for that bored look in your spouse's eyes to alert you that you are repeating yourself. This rarely works.

I have forgotten the names of friends' spouses and children hundreds of times. I now understand why my parents had so many acquaintances called "whatshisname." Big social occasions become gauntlets as people whose names I've forgotten greet me by mine. When I do remember someone's name I sing it out proudly -- and then later cringe at the thought that I may have gotten it wrong anyway. I wish I could wear a sign around my neck at times like these. It would say roughly the following: "Please don't take it personally that I cannot remember your name. I can list the last several articles you've written that I particularly enjoyed or the talk you gave at whatever that was broadcast on C-SPAN. But names are my nemesis!"

There are other dismaying aspects of middle age, but there are also major compensations. Truly. George Bernard Shaw (at least I think I remember that it was Shaw) famously quipped that "Youth is wasted on the young." One great aspect of getting older is that you gradually shed your self-consciousness. To quote Cher's character in "Moonstruck," you "get over yourself." Young people are in perpetual fear of being embarrassed, of saying or doing or wearing the wrong thing. They are burdened by an exaggerated feeling of conspicuousness. We middle-aged people get to the point of not caring so much about the opinions of others. We know that most of the time people are too wrapped up in themselves to even notice or care what we may be doing. And if they do take notice and judge us harshly, who cares? Suddenly little old ladies in tennis shoes make perfect sense.

So fear not. While the mental decline may begin at 23, the serenity kicks in later.