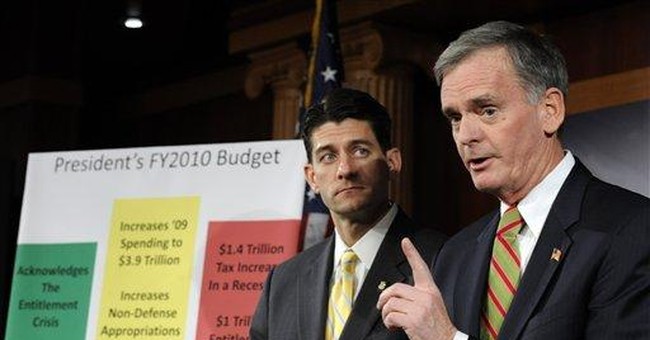 It became clear back in October when the tsunami called the financial crisis washed over the United States (and the rest of the world), that the 2008 election might be a deeply consequential one. Until the economy tanked, the contest between Barack Obama and John McCain was about conventional Democrat/Republican disagreements. Even differences over the war in Iraq and foreign policy had seemed to contract with the continued progress of Gen. David Petraeus' strategy. Though Barack Obama had the most liberal voting record of any senator, his campaign gave no appearance of extremism. You might have had your private doubts, but on paper he was a gun-defending proponent of traditional marriage who simply wanted to make government work better. Pro-union? Sure. A down the line supporter of abortion rights? Yes. But an FDR-style statist with grand ambitions to alter the American political landscape? No.

Immediately after the election, Obama chose a number of centrist advisers and even kept Robert Gates at the Pentagon. Some of us wondered whether he was really planning to govern from the center. Left-wing bloggers began to shift uneasily in their chairs. But they can relax now. With his "stimulus" package and his quasi-State of the Union address this week, President Obama has made it abundantly clear that he intends to hustle this country into European nanny state socialism if he can (and just as fast as he can).

The president thinks he has the opening to do so because this contraction, a bust following a boom such as free markets have experienced since the dawn of trade, has been interpreted by the political and journalistic classes as an unprecedented collapse of capitalism. Obama, his serene, non-confrontational style notwithstanding, has been adept at fueling this panic. Nothing less than "catastrophe" loomed if we failed to pass the most gargantuan government spending orgy in history. (James Glassman offers a useful historical tour of previous attempts to stimulate the economy through spending in the March issue of Commentary magazine. They are ineffective.)

With the public suitably frightened and biddable, Obama now strides to the podium and begins prescribing particular government policies. (Have you noticed his troubling habit of denying what he is doing? For example, in his speech to Congress he said he asked for the stimulus bill "not because I believe in bigger government -- I don't." And in recommending a bailout of mortgage holders, he denied that any relief would go to "speculators" or those who "bought more house than they could afford" but that is exactly what the package will do.)

Suddenly, because the economy nose-dived in the middle of an election, we are living in Obamaland, where Barack's policy ideas are to be rushed into legislation. He thinks it would be a good idea for medical records to be digitized. Well, some in the field have questioned whether the investment in digital records would really be worth the cost. Perhaps the money could have been better spent elsewhere while the digitalization would have been spread out over more years. But so much for that debate. It's in the stimulus bill now.

Similarly, Obama has decided that we should spend billions more on preschool education because as he put it, "we know that the most formative learning comes in those first years of life." Well, that's actually doubtful. I refer the president to "The Myth of the First Three Years" by John Bruer. He argues persuasively that we have been misled about the importance of early learning; that the brain is actually quite plastic and lifelong learning is the norm. Other brain researchers agree. There is also controversy about even such gold-plated programs as Head Start.

But this is a strange way for a democracy to make policy. We shouldn't be in the position of trying to persuade the king or dictator. Policy shifts should be slow and gradual. One state should experiment with universal preschool and then compare results after say, five years, with other states that don't have it. That is how we successfully reformed welfare in the 1980s and 1990s. States like Wisconsin led the way with reforms that proved efficacious and then the nation followed. (That success, by the way, has been undermined by the stimulus law.)

Obama, like other liberals, wants to dispense with experimentation and debate (which he dismisses as the "the same old gridlock and partisan posturing") and sluice an enormous liberal/socialist wish list, to include single-payer health care, universal college education, and so-called green energy into law.

It will be difficult to resist this charismatic figure, but let's be clear about this: Though he denies what he is about, he is pulling the country dangerously toward a statist dead end.