Where Is Free Market Economics When We Need It Most? 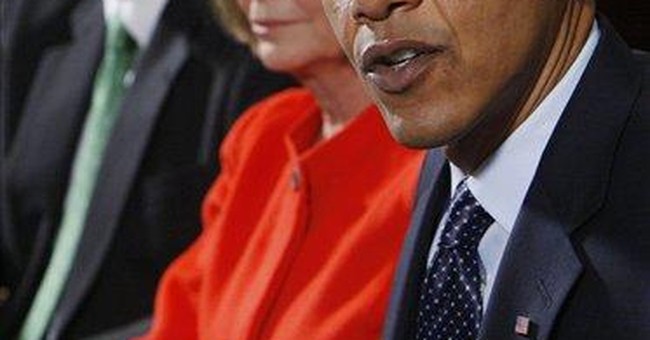 "Lending Drops at Big U.S. Banks," reports the front page of the Wall Street Journal. Even those banks that have just received an infusion of $148 billion in taxpayer dollars as part of the TARP saw their loans drop by 1.4 percent between the third and fourth quarters of 2008, the paper reports. The economy seems to be shedding jobs like a dry fir tree losing needles. People speak of a "consensus" that only a huge stimulus plan by government can save us.

Certainly President Obama seems supremely confident that the federal government, in his own capable hands, can tackle everything from job creation to education to global warming. All that is needed is to set aside "stale" partisan arguments and salute smartly.

President Obama was a teenager when some of the smartest liberals in America (dubbed the neoconservatives) were beginning to have doubts about the power of government to do good. Daniel Patrick Moynihan, Irving Kristol, Norman Podhoretz, Nathan Glazer, Aaron Wildavksy, and many others observed the effects of Lyndon Johnson's "Great Society" initiatives and became sobered up. (A few, including Moynihan, returned to the liberal fold but most did not.) They noticed the waste and the ineffectiveness of huge government programs, but above all, they were chastened by the law of unintended consequences -- that the unforeseen or indirect effects of government policy were usually more damaging and more important than the desired effects. Minimum wage laws are a good example. Intended to help the poor earn a living wage, they instead discouraged hiring of the low-skilled. Rent control was supposed to make it easier for the poor and middle class to afford apartments but wound up making low-cost housing less available.

All of that social learning is well in the past now. President Obama seems to have burst on the scene without ever having grappled with those lessons. Not even Republicans behaved in power as if they believed in free markets. One hates to pile onto President Bush, who did many things right and has received more undeserved calumny than anyone in recent memory, yet it must be said (and has been said before in this column) that President Bush, along with a sloppy and incontinent Republican majority in Congress, managed the feat of discrediting free market economics without ever practicing it. It was the Republicans who passed the Medicare prescription drug bill, and the bloated farm bill, and the transportation pork. This disqualifies most Republicans from challenging the gigantic new trough feeding that is about to begin under the Democrats.

It was, or should have been, frightening news that the United States is now $10.7 trillion in debt, sporting a $1.2 trillion deficit. As Mark Steyn noted, your pocket calculator doesn't have enough spaces to input one trillion dollars. The Democrats' solution is to make our deficit $2 trillion with a "stimulus" package. The Congressional Budget Office (run by Democrats) reports that -- all talk of "shovel ready" projects notwithstanding -- only about 25 percent of the new spending in the package would actually be spent by 2010. And it defies common sense to believe that transferring $100 billion from the federal government to the states to help with Medicare reimbursements will stimulate economic activity. Nor will $200 million to rehabilitate the National Mall in Washington, or $500 million to install new bomb detectors at airports, or $400 million to NASA to conduct climate change research (which several other agencies are already studying), and on and on.

We are, not to put too fine a point on it, about to send another trillion dollars of our money into a rat hole. Permanent tax cuts, for individuals and businesses, have been proven to stimulate the economy. They worked under Kennedy and Reagan. But to point this out now is like shouting into a whirlwind.

As Gordon Crovitz and other wise men have pointed out, we got into this mess because government created a housing bubble. Until the bad assets held by banks are cleared -- and the TARP has clearly failed to do this -- all of the money shoveling will just prolong the agony. Capitalism prescribes tough medicine for mismanagement. But insolvency, bankruptcy, and recession are all necessary correctives that lay the groundwork for healthy recoveries. The Democrats are trying to avoid the short-term pain. The result will be long-term pain.