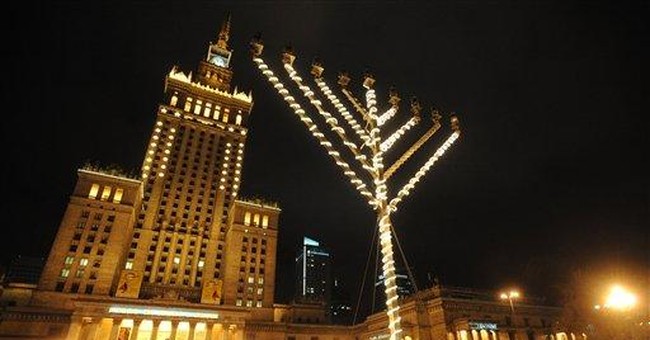 My friend Danielle Frum (wife of David) has decorated their house with Hanukkah lights this year. No big deal, you say? But I'm not talking about multiple menorahs in the kitchen or dining room. I'm talking about lights on the outside! Arriving after dark, the visitor is welcomed with white poinsettias lining the front stairs, and glowing blue Star of David lights in the windows. "It's the festival of lights, isn't it?" explain the Frum children.

Is this kosher? Is this too great a concession to the magnetic power of Christmas? Trust me, all across the Western world, some Jewish families are erecting Christmas trees, stringing lights on shrubbery, and singing carols. It's no mystery that many non-Jews are dumbfounded to learn that most Jews do not, actually, celebrate Christmas.

The gravitational pull of the Christmas holiday (though it seems gaudily commercial and pathetically watered down to many serious Christians) nevertheless is felt by Jews (and probably all other non-Christians) at this time of year. Speaking just for myself (and no one would ever mistake me for a religious authority), I think the Frums' tasteful introduction of exterior decoration was fine because it was faithful to the message of Hanukkah. We are instructed by our tradition to place the lighted menorah in a window facing the street if at all possible in order to proclaim to the world the miracle we are celebrating. A blue Star of David in the window is well within that spirit.

Besides, it totally beats another Jewish style I've witnessed so often. Call it the Puritanical Jew pose. The Puritanical Jew not only won't participate in anything that smacks of Christmas, he downplays Hanukkah, too. "What's all this about Hanukkah presents?" he will demand huffily. "When I was young we played dreidel for a few pennies and maybe had a piece of chocolate. That was it. And we were grateful." "Besides," he will add, "Hanukkah isn't an important Jewish holiday. It's been inflated to compete with Christmas."

Actually, Hanukkah, which began on Dec. 21 this year, is an important Jewish holiday. It's possible that, like Christmas, it is celebrated in the dark of winter not because the events it memorializes happened in December but rather because this time of year demands a warm celebration. But that is a trivial matter. The actual events on which Hanukkah is based concern faith, the challenge of secularism, and victory over persecution.

In 200 B.C.E., Israel, which was then Judea, was controlled by the Seleucid Empire (one of the successors to Alexander the Great). The confrontation between Jews and Greek culture was a complicated one. Jews found much to admire in Greek philosophy, the Greek language and literature. In fact, so attractive were Greek ways that a rift opened between Hellenizing Jews, who adopted Greek styles of dress, exercise (nude), and eating; and traditional Jews who clung to Biblical teaching and abhorred Greek polytheism, sexual license, and love of pleasure. It might have remained a simmering civil conflict. But in 167 B.C.E., King Antiochus IV erected a statue of Zeus in the Temple in Jerusalem and outlawed a number of Jewish practices including observing the Sabbath. That sparked a rebellion. The Maccabees, a small band of zealous Jews, took up the sword against the Seleucids and also against their Hellenizing brothers (though the latter is less often mentioned). The Maccabees' victory against a numerically superior foe was unexpected. They cleansed and rededicated the Temple and relit the lamp that hung before the altar. It had only enough oil to burn for one night. But as the story goes, it miraculously burned for eight -- long enough to press and prepare more oil.

In honor of that oil Jews have adopted the custom of eating fried foods on this holiday -- doughnuts and potato pancakes (latkes). Or to put it another way -- my son David's idea of the perfect meal. Actually, it's a rare person who can resist a hot latke smothered in applesauce. When you combine that with the dancing flames of colorful candles, the presents waiting to be unwrapped, the familiar tunes, and the promise of seven more nights, you've got a keeper. Of course it isn't Christmas. But it's a great holiday in its own right.