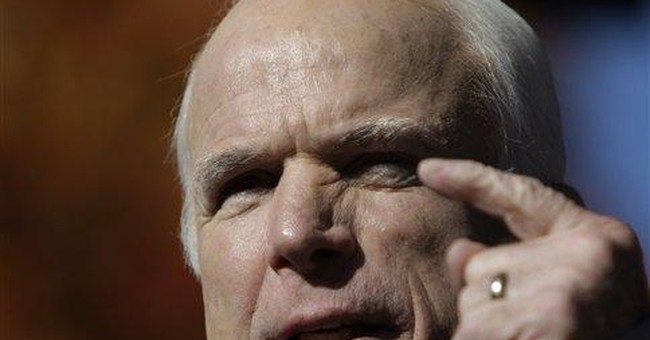 10.) John McCain is much, much funnier than Barack Obama. But then, almost everyone is.

9.) John McCain is a passionate patriot who has always been, and will always be, guided by what he thinks is best for America. He can trace his ancestry back to an officer on Gen. George Washington's staff and his family has served the nation nobly in war and peace ever since. McCain believes in winning wars.

8.) McCain's intimate familiarity with military matters also makes him less biddable by the armed services. He was able, when most others (most notably his opponent) were not, to see that a change of strategy in Iraq -- not a retreat -- was needed. He brings an informed skepticism to military procurement requests as well.

7.) As he told Rick Warren, McCain believes that there is evil in the world and that it must be confronted. While Mrs. Obama and many others seem to think that our enemies will purr like kittens once we inaugurate a black man with an Islamic middle name, that is dangerous fantasy. When asked for an example of evil, McCain mentioned al-Qaida putting explosive vests on two mentally impaired girls and blowing them up by remote control in an Iraqi marketplace. Obama, whose turn of mind is different, cautioned that the problem is sometimes us: " a lot of evil has been perpetrated based on the claim that we were trying to confront evil."

6.) McCain may not be a Ph.D. economist, but he understands that raising taxes and adopting protectionist trade policies will deepen and prolong this recession. Nor would he permit Nancy Pelosi and Harry Reid to push through the "card check" law -- a union-backed measure that would reverse 73 years of labor law in this country by scuttling the secret ballot in union elections. Even George McGovern has denounced this job-killing, freedom-smothering law that Obama supports. Greater unionization will translate into lost productivity, inflationary pressure, and fewer jobs.

5.) John McCain will try to protect the unborn. Barack Obama is the most radical pro-abortion candidate ever to win a presidential nomination. Obama has promised to back the Freedom of Choice Act as his first presidential act, which would invalidate all restrictions on abortion at any stage of gestation -- and even in cases where babies are born alive after an attempted abortion.

4.) McCain will employ diplomacy, not worship it. Obama is deluded about the power of "talks." In 2007, he proposed, regarding Iran's nuclear program: "if we are meeting with them, talking to them, and offering them both carrots and sticks, they are more likely to change their behavior."

3.) John McCain has said that his models for good judicial picks are John Roberts and Samuel Alito. Senator Obama will pick Ralph Nader and Dennis Kucinich (just kidding, but his choices won't be far off).

2.) McCain's health care proposal will improve the world's best health care delivery system. He proposes to reform the most distorting aspect of our current system (the tax break for employers) and give the tax break to individuals instead. It is McCain's proposal, not Obama's, that will give individuals the choice to stay with the plan they have or take the tax credit and shop around (in a market enlarged by permitting interstate insurance). Obama's plan, by contrast, is a key first step to achieving his oft-repeated preference for a single-payer system like Canada's. By forcing employers to provide certain (as yet unspecified) benefits or pay a tax ("play or pay"), Obama's plan will encourage employers to dump more and more people into a government-run health insurance system like Medicare. Word to the wise: In Canada, they are seeking to reduce wait times for care. One province reported waits of 26 weeks for hip replacements, and others are trying to ensure (without success) that cancer patients are treated within 4 weeks of diagnosis.

1.) The financial crisis and looming recession, combined with President Bush's low approval ratings, have set the stage for this election to be a pivot point in American history. If Barack Obama is elected president and Democrats control large majorities in the House and Senate, the Obama/Pelosi/Reid triumvirate will move the country decisively in the direction of dying Europe -- low productivity, high joblessness, low birth rates, high taxes, and limp foreign policies. The triumvirate will do this at a time when a vibrant America is more necessary than ever -- with Iran seeking nuclear weapons, Pakistan teetering, al-Qaida regrouping, China and Russia telegraphing hostility, and Iraq just barely emerging into the sunshine. This election has become about far more than John McCain versus Barack Obama; it has become about whether the United States will remain the champion of freedom -- economic and political -- or whether we will join the queue of formerly great nations now struggling to pay for all the social welfare "benefits" their aging and lazy populations demand.