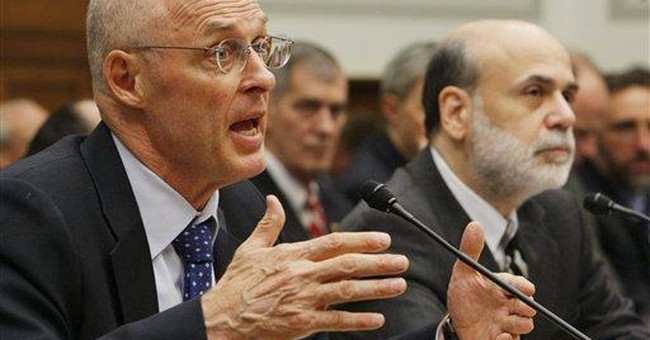 As I write, news is coming across the wire that a bill to bail out the financial industry is likely to pass. That is a relief. We have not seen a real financial panic for 80 years -- but that doesn't mean we couldn't. Just as the psychology that creates bubbles (whether for tulips or real estate) does not change over time, neither does the psychology that stampedes for safety during crashes. If large numbers of people transfer their money to Treasury bonds (as many appear to be doing already), the pool of capital available for business and personal loans will dry up and America's economy will find out what a 21st century depression looks like.

Conservatives rightly detest government bailouts of any kind. It violates our free market principles. But if some government rescue is not forthcoming, a worse scenario (from the conservative perspective) is very likely. We could slide into a deep recession just weeks before an election. As of today, banks have stopped lending to one another. When voters look around for someone to blame, they will find a fable offered by Democrats. That fable goes like this: The Republicans presided over an "anything goes" party during the Bush administration and failed to properly regulate the superrich of Wall Street. They did this because they are capitalists who disbelieve in regulation. Democrats, never wild about capitalism, will correct the lax oversight of the Republican regime and make it possible for happy days to be here again. By a 2 to 1 margin, according to a CNN poll, voters blame Republicans more than Democrats for the present crisis.

Democratic spin is working. Republicans need to wake up.

At the root of this mess is not the failure of capitalism but political interference in the market. It was Democrats who pushed for and passed the Community Reinvestment Act of 1977 that forced banks to serve their "whole communities" and required them to offer loans to people who were not credit worthy. In 1995, the Clinton administration's Department of Housing and Urban Development, headed by Andrew Cuomo, implemented new regulations requiring banks to meet numerical quotas in lending and demonstrate the diversity of their borrowers.

While housing prices were rising, the bad loans were hidden. But as soon as prices began to fall and adjustable ARMs kicked in, the defaults began.

It was Democrats who closed ranks to insulate their pet projects -- Fannie Mae and Freddie Mac -- from proper oversight and regulation. A New York Times article from 2003 described the opposition to a Bush administration proposal to enhance oversight: "Among the groups denouncing the proposal today were the National Association of Home Builders and Congressional Democrats who fear that tighter regulation of the companies could sharply reduce their commitment to financing low-income and affordable housing." Rep. Barney Frank (D-Mass.) claimed of the thrifts, "These two entities are not facing any kind of financial crisis. The more people exaggerate these problems, the more pressure there is on these companies, the less we will see in terms of affordable housing." Representative Mel Watt (D-N.C.) added, "I don't see much other than a shell game going on here, moving something from one agency to another and in the process weakening the bargaining power of poorer families and their ability to get affordable housing."

As for the regulations that were adopted, some, like the "mark to market" accounting rule, have taken a serious situation and transformed it into a disaster. An estimated 6 to 7 percent of home mortgages are in default (compared to 40 percent in the 1930s). Under the old cost accounting system, investment banks would have been able to manage the losses with patience and time. But the mark to market rule (imposed by many including the Securities and Exchange Commission in response to the S and L debacle and the Enron scandal) requires that banks value their assets based on what they can fetch at any given moment in the open market. Well, because the housing market was in a temporary dither, banks were forced to wildly write down their portfolios, spreading the contagion of panic even further.

The secret good news beneath today's terror is that 93 or 94 percent of America's mortgages are sound. Once the liquidity crisis is blunted and the bad loans sorted out, taxpayers should see most if not all of their $700 billion back. But the moral of the story must be understood -- it wasn't lack of regulation that got us here, it was bad regulation.