Farewell to a Great Man 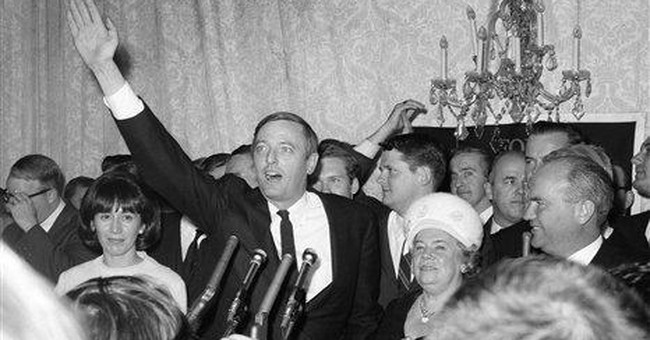 When the terrible sad news of Bill Buckley's death came, I reached for my folder of letters we'd exchanged over the years. It's a thick file, and it makes me well up a bit to realize that I can expect no more bright while envelopes with the familiar blue lettering.

That Bill should have taken notice of me at all was a bit incongruous. By the time I was old enough to write to him -- the 1970s when I was in high school -- he was a world-renowned public intellectual. Yet he took the time to answer a girl's letter. The entire neighborhood must have known that something unusual had happened at 11 Tiffany Drive after the mail was delivered because I was soaring like a kite. Bill did that for literally thousands of people over the years -- it was an aspect of his incredible generosity of spirit.

I was at first drawn to Bill Buckley's columns by a love for words. Anyone who could send me to the dictionary on a regular basis had my attention. But dipping into the Buckley oeuvre proved highly addictive. Before long, I was absorbing far more than new vocabulary. I began to read National Review, which marked me as a bit of an eccentric in a liberal place like New Jersey. Like most ardent Buckleyphiles, I turned first to "Notes & Asides" when NR arrived and savored exchanges like this one reproduced in Bill's book "Cancel Your Own Goddam Subscription":

Dear Mr. Kelly: If you had my syntax you'd be rich. Cordially, WFB

On another occasion, he published a mash note from a 16-ish young lady who professed her desire to marry him. He replied (I quote from memory), "I'm spoken for, but you might give Justice William O. Douglas a try." (At the age of 67, Douglas had married a 23-year-old law student.)

As everyone knows, Bill Buckley almost single-handedly created the modern conservative movement in America. Before Buckley, conservatives were scorned as "the stupid party" in John Stuart Mill's memorable formulation. Lionel Trilling argued in the late 1940s that conservatives didn't have ideas so much as "irritable mental gestures."

What could they say of Bill Buckley, a polymath whose wit could be withering, whose prose was pellucid, and whose energy was seemingly inexhaustible? Bill's talents were so galvanic that they energized an entire movement, first among those who joined him at National Review -- James Burnham, Priscilla Buckley (Bill's sister and the magazine's managing editor), Frank Meyer, Wilmoore Kendall and Whittaker Chambers -- and then in concentric circles to include, I think it safe to assert, every important conservative thinker today. All owe Bill a huge intellectual debt, and many benefited from his generosity personally.

Bill nearly cornered the market on personality -- witty, dashing, handsome, gracious. Though serious about his work and the things he cherished -- his family, his country and his God -- he was gifted with lightheartedness about most everything else. There was nothing, nothing more satisfying than making Bill laugh. He would throw back his head and guffaw, and how his eyes would sparkle!

Bill was more than a hugely talented and magnetic person though. He was a man of character. He performed more acts of charity and kindness than any of us will ever know of, though through my close association with National Review over the years, I know of a few. Throughout his whirling and eventful life, he conducted himself as a gentleman -- something that seems to elude most public figures.

For me, he provided my first and most formative professional experience at National Review. Throughout my career, he offered help, advice and the occasional rebuke when I deserved it. Now that we see his life in full, we have even more reason to marvel and to honor him for what he was: a great man -- a once-in-a-century figure.