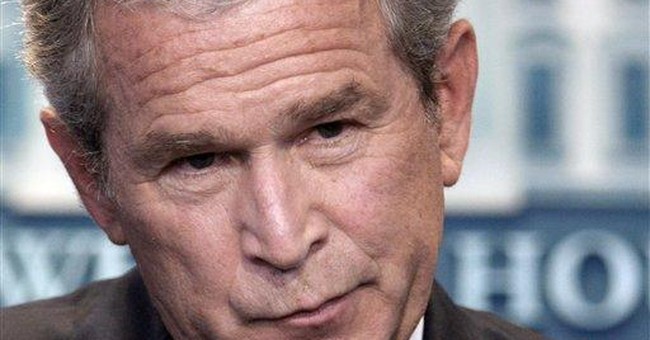 Is the Republican Party standing on the edge of a cliff? It's possible. Let's consider the bad news.

1) Fund-raising. Republicans are still portrayed as the little Monopoly man capitalists by the media, but the truth is that Democrats are now (alas) the party of the rich. As Peter Schweizer reported in National Review Online last year, "In 2004, Democrats made up 15 of the 25 individuals who gave more than $2 million to 527 groups. Of the Senate and House candidates who received 'bundled' contributions that year, 9 out of the top 10 in the Senate and 8 out of 10 in the House were Democrats. . . . In 2002, those who gave a million dollars or more gave $36 million to the Democrats and only $3 million to Republicans, a 12:1 ratio."

Fund-raising for 2008 has so far vastly favored the Democrats. Over the past three months, the top three Democratic candidates have raised $68.5 million compared with $48.7 million for the top three Republicans.

There may be many reasons for this Democratic advantage, including a certain reticence among those who wish to support former Sen. Fred Thompson (and we don't yet know how much he has raised). But Democratic House and Senate candidates too are outstripping their rivals.

2) Party Identification. Five years ago, the country was equally divided between the two parties, with 43 percent calling themselves Democrats and the same number identifying as Republicans. Today, according to the Pew Research Center, 50 percent identify themselves as Democrats compared with only 35 percent who say they prefer the GOP. Among young people, the trend is even more dramatic. Eighteen to 24-year-olds are more secular, more culturally liberal and better disposed toward the Democratic Party than their elders. They are also voting in larger numbers than they once did. Additionally, party identification tends to remain stable throughout life. A voter is more likely to stay married to his party than to his spouse.

4) The War. Losing wars -- or not winning them decisively -- is political poison. The Iraq War started to go south with voters when we failed to find caches of WMDs. Support eroded further when Iraq lurched drunkenly into internecine violence and disorder to the soundtrack of liberal Democrats at home blaming the president for (in Ted Kennedy's words) "lies, lies, lies." It slipped even more when the president displayed unimaginative stubbornness about tactics.

Surely fair-minded people can agree that the president was not to blame for the intelligence failure. Nor is he wrong now that failure in Iraq would be a disaster for American security. But the situation calls (and has for some time called for) a more articulate explanation than the president has proved capable of providing. We are in a position of seeking to create order in Iraq, while al Qaeda seeks to create disorder. It is orders of magnitude easier to create chaos than it is to create order. That doesn't mean it is impossible. But it will require patience and above all, will.

The president has the will all right, but he so often makes the mistake of assuming that his will is all that counts. He repeatedly assures the world "so long as I'm the president we will not withdraw." But he will not be the president much longer. It is far more important to bring the country along than just to stick to your guns. At his July 12 press conference, asked about congressional support, he said, "The job of the Congress is to provide funding." He might as well have added, "So shut up." That is failed leadership, and the Republican Party may well pay a heavy price for it.

There are countervailing indicators. The economy is strong. The deficit is way down. There may be a certain weariness among voters with the Bush/Clinton/Bush/Clinton pattern. Democrats continue to present an image of soft-headedness on defense and security issues (viz. John Edwards's assertion that the war on terror is just a slogan). On the other hand, consider this fact from the Pew Research study: In 2002, 62 percent agreed with the statement "The best way to ensure peace is through military strength." Today, only 49 percent do.