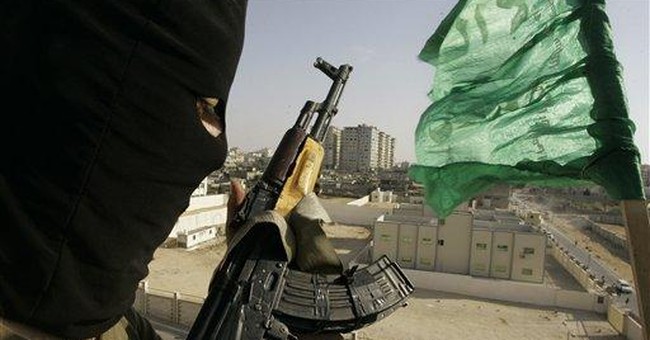 The streets of the Gaza Strip echo with gunfire as masked men fire on one another. Hundreds of Palestinians have been kidnapped, tortured and executed by other Palestinians in the past two years. In recent days, the fighting between Hamas and Fatah has intensified.

The New York Times reports that "two Palestinians were thrown from the roofs of high-rise buildings in Gaza City. One was an officer of the Presidential Guard, loyal to Fatah, and the other a member of the Executive Force, which was set up by Hamas as a counterweight to the Fatah-dominated official security forces."

In a seaside neighborhood in Gaza City, reports the Jerusalem Post, hundreds of members of the Bakr clan (loyal to Fatah), including women and children, were marched, hands up, to a nearby mosque. More than 10,000 Palestinians have filed requests to emigrate since January, prompting the Palestinian Authority's mufti to issue a fatwa forbidding Palestinians to leave the "blessed lands."

Who is responsible for this savagery? Why, the United States and Israel, of course. So declared the United Nations envoy to the Middle East, Alvaro de Soto, in a "confidential report" shared with The Washington Post. De Soto, who resigned last month after a 25-year career at the UN, blasted the U.S. for declining to fund Hamas after its victory at the polls in 2006, and complained that the Quartet (which includes the United States, the European Union and Russia) has taken "all pressure off Israel . . . even-handedness has been pummeled into submission."

Let's see, Israel withdrew altogether from the Gaza Strip in 2005, leaving the Palestinians to govern themselves. There they could have begun the process of building the "secular, democratic" state they've been claiming to thirst after for 50 years. Instead, Gaza has fulfilled the worst nightmares of the Israelis who opposed withdrawal -- importing arms from Iran, lobbing missiles into Israeli towns and engaging in internecine violence that makes a mockery of peace negotiations.

A Peruvian career diplomat at the UN is unable to see beyond his own prejudices, yet a reform-minded Egyptian author published an online essay (translated by The Middle East Media Research Institute) that penetrates to the heart of what ails Palestinian society and the Middle East in general. Kamal Gabriel's analysis would resound for its wisdom anywhere, but it is particularly noteworthy coming from within the Arab world -- a useful reminder that voices of reason and benevolence are not altogether silent in that part of the world.

"[T]he all-against-all infighting and its basic code have become the mental and psychological makeup of the Palestinian people, as a natural result of the predominant discourse of hostility and incitement. [This discourse] has been adopted by Palestinians of all persuasions and in all the factions -- religious, pan-Arab revolutionary, and leftist. It is a discourse whose aim was sowing hatred, having recourse to violence, and enjoying spilling blood.

"At first it was directed against the so-called Israeli enemy, and it uprooted any possibility of or tendency towards rational mutual comprehension or of recourse to discussion, dialogue, and negotiation . . .

"This was translated into political language in the slogan that the Arab-Israeli struggle is an existential struggle, and not a struggle over borders, and its implementation in practice was the so-called martyrdom-seeking operations for killing Israeli civilians. The hatred was transformed from hatred of Zionism to hatred of Jews, 'the sons of apes and pigs.'

"Perhaps no one has noticed -- for where are we to find someone to notice, in the absence of reason and rationality? -- that when you take an individual or a group away from the culture of using reason and peaceful dialogue, and replace it with the culture of violence and of killing those who are different, you cannot then afterwards control it and direct it to be used against one single side.

". . . It starts with the Zionist enemy who is occupying the Holy Land, and the violence and the hatred spread dangerously, like fire, in the psyche . . . . They consume everything around them -- and the first thing they consume is the light of reason. . . . Thus we observed, and gave our blessing to, the conflagrations of violence and hatred . . . and its expansion is the fraternal violence we see [today] . . .

"In my estimation, this is the fruit that we are harvesting because we sowed thorns for over half a century."