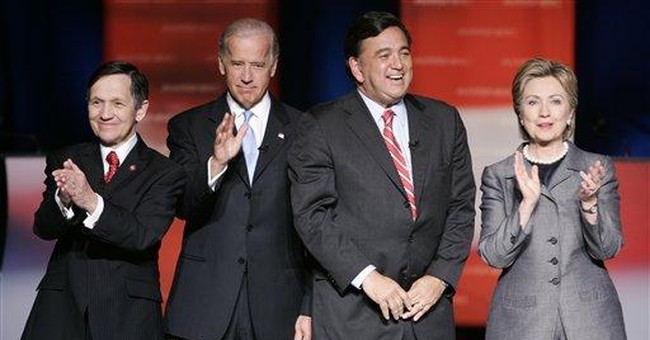 Speaking on the Senate floor in favor of the supplemental funding bill for the war in Iraq (and salmon fishers, timber counties, woodland firefighting efforts and other projects), Sen. Barbara Boxer implored the president to sign the legislation. The bill would have required the start of American withdrawal from Iraq by July 1 if the Iraqis failed to make progress toward certain legislated "benchmarks," and by Oct. 1 even if they did make such progress. Her rationale was as follows: The war is lost. We've tried everything and failed. Therefore , it is time for diplomacy.

Sen. Boxer speaks for most Democrats on this. During the debate among Democratic presidential hopefuls, New Mexico Gov. Bill Richardson promised that if elected he would "immediately withdraw all of our troops" and would use "intensive diplomacy" to stabilize the country. Sen. Barack Obama intoned the cliche of the year: "What we can't do is expect that we can continue to impose a military solution on what is essentially a political problem."

Rep. Dennis Kucinich demanded nothing less than that we "quit using war as an instrument of policy." (Sen. Joseph Biden disagreed, citing Afghanistan and the Balkans as places where war was justified.) Sen. Hillary Clinton dodged the question of what to do about Iraq, but praised House Speaker Nancy Pelosi for traveling to Syria to talk to President Bashar Assad, one of those who are supplying funds, weapons and support to the terrorists who are killing our people in Iraq. And she voted for the supplemental bill. (President Bush vetoed it.)

This starry-eyed attachment to diplomacy has been a feature of Democratic thinking for as long as I can remember. Democrats are always keen to talk. Let's talk to the Iranians. Let's chat with Assad. Let's dialogue with the Sandinistas.

There is nothing wrong with diplomacy rightly understood. Diplomacy is a delicate dance among nations attempting to influence one another. Democrats seem to think that diplomacy leads to greater "understanding" between nations and thus to peaceful solutions of disputes. There is no evidence for this -- and for a very good reason. Conflict does not arise out of misunderstanding. It arises out of aggression on one side. World War I is almost universally believed to have been the prototypical war of misunderstanding, with both sides amassing vast arsenals for no good reason except that the other side was doing so. This mutual suspicion then led to a terrible conflagration ignited by one assassin's bullet.

This conventional wisdom about World War I continues to affect our thinking about war and diplomacy to this day. But as several recent historians, including Andrew Roberts ("A History of the English-Speaking Peoples Since 1900") and Patrick Glynn ("Closing Pandora's Box"), have pretty conclusively demonstrated, this is a fable. World War I was the result of the Kaiser's desire to dominate Europe.

This is not to say that diplomacy is stupid or useless. Hardly. It serves a critical function in avoiding conflict when one nation sends accurate signals to another about how aggression will be confronted. The most obvious negative case is probably the disastrous meeting between April Glaspie, U.S. ambassador to Iraq, and Saddam Hussein before the Gulf War. Glaspie told Saddam that the U.S. had no interest in his dispute with Kuwait, thus seeming to offer a green light to his aggression. It is probable that if Glaspie had issued a stern warning, the invasion would not have happened.

But diplomacy that is not backed by the threat of force is gaseous and futile. What shall we say to Mahmoud Ahmadinejad that can possibly improve our relations? Gee, we really wish you wouldn't stone adulteresses to death and threaten a second Holocaust on the Jews. Will he slap his forehead and exclaim, "Oh gosh, you thought we meant those things? Those were just jokes"?

Back to the Democrats and Iraq. One sure thing about diplomacy is that you cannot go backwards. Warnings, demarches and talks can prevent war from erupting, but after you've already resorted to the use of force, there is no going back to diplomacy. "Cooperate with me or I'll, I'll . . ." what?

The hard truth is that progress in Iraq (and there has been some since the surge began) is painstakingly slow. It will require patience and grit to prevail. But to suggest that diplomacy can solve this problem now is pure fantasy.