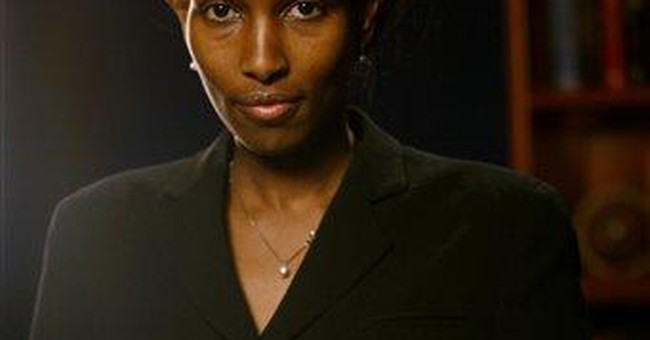 I first heard of Ayaan Hirsi Ali when they pulled the knife from Theo van Gogh's chest in November of 2004. The Dutch filmmaker had been shot and then nearly beheaded as he rode his bicycle to work in Amsterdam. His attacker felt justified in committing this filthy murder because van Gogh had insulted Islam in a short film titled "Submission" about the treatment of women in the Islamic world. Ayaan Hirsi Ali, a Somali by birth but by then a member of the Dutch parliament, had written the screenplay. Under that knife was a long rambling letter addressed to Hirsi Ali and to the West generally. Full of threats and imprecations, the letter warned that she was next.

Her story, a completely engrossing narrative I found hard to put down, began in Somalia in 1969. She was born into the Osman Mahamud subclan of the Darod clan. For a Somali child, nothing is more important than memorizing her lineage for as many generations as she can count. It can mean the difference between murder and protection -- and later in the story, it does for Ayaan.

Her birth coincided with the birth of the new Somalia, which was emerging from years of colonization by the English and the French. Her father, active in politics and later in the opposition forces, hoped to create a democratic society that would astound the world. Instead, as with nearly all of the newly independent African nations, Somalia spiraled down -- first into a Soviet-style dictatorship and later into civil and tribal war and chaos.

Instead of finding within her family a refuge from the cruelties of the wider world, Hirsi Ali found persecution instead. She loved both of her parents, but her mother was her father's second of three wives. He was often away (sometimes in prison for his political activities), and her mother was sometimes hysterical and frequently violent. Hirsi Ali relates being beaten with a rolling pin and being beaten while tied hand and foot. As a Muslim female she was expected to be obedient, servile and meek. All of the housework fell upon her, not her brother. He bullied her mercilessly and got away with it because he was the boy. When she was naughty and disobedient toward her Quran teacher, he cracked her skull and nearly killed her. She was also tortured -- there is no other word for it -- by female circumcision. She writes, "In Somalia, like many countries across Africa and the Middle East, little girls are made 'pure' by having their genitals cut out." This was done to Hirsi Ali when she was 5. Her description is graphic and blood-curdling.

Because of her father's prominence in the anti-Siad Barre forces, the family was kept constantly in motion. They lived in Saudi Arabia, where Hirsi Ali heard the cries of women being beaten by their husbands, and in Kenya, where she saw young boys who had stolen something beaten to death by crowds cheering and jeering. She lived in Ethiopia among Christians her mother regarded as "despicable."

She witnessed the rise of Islamic extremism -- Saudi money and influence spread the virus worldwide -- and even felt drawn to it herself for a while, shrouding her body in a hijab and trying to pray fervently five times a day.

But she also read all the Western books, novels mostly, she could cadge in Nairobi, and these planted seeds in her young mind. There could be equality between men and women. Instead of being force-marched into arranged marriages, young women could think of romance and even love.

Those seeds would sprout later, when she fled an arranged marriage herself and sought refuge in Holland. Far more perceptive than most around her, she could see that Holland's unwillingness to give offense to Muslims was enabling the Muslim minority to continue to persecute its girls and women on European soil.

She is now in the United States, after a tumultuous time in Holland, and we are the richer for it. This is a brave, humane and fascinating book by an extraordinary woman.