Is Giuliani a Conservative? 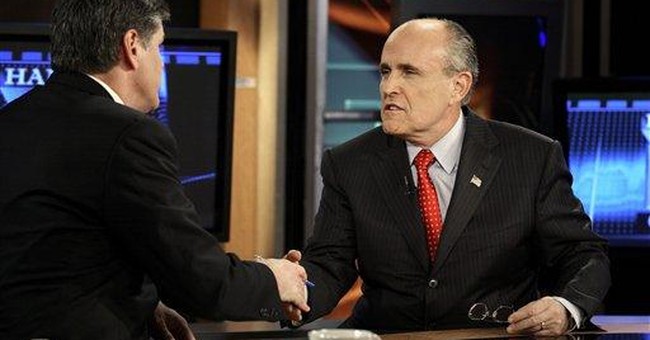 Last week C-SPAN featured a discussion about Rudolph Giuliani that left me shaking my head. The gist of the guest's message was that Giuliani was a "Rockefeller Republican" who was suddenly transformed into a darling of conservatives after 9/11. Today, Fox News echoed the same theme.

That's quite wrong. Social conservatives have trouble with Giuliani, but by no stretch of the imagination is he a Rockefeller (i.e. liberal) Republican. In fact, in many ways Giuliani is the most conservative of the top three candidates for the Republican nomination. He came by that conservatism in the toughest crucible.

City Journal's Steven Malanga reminds us of the details. When Giuliani was elected mayor, New York City was Exhibit A in failed liberal governance. Crime was out of control. Public spaces were marred by a combination of omnipresent graffiti; so-called "squeegee men" who preyed on motorists; and raving homeless people who took up residence on sidewalks and in building entrances. Public employee unions had shaken down the city government for years. The tax base was eroding. The city government was deeply in debt, and fully one in eight New Yorkers was on welfare.

Giuliani transformed a city whose budget and workforce were larger than those of all but five or six states. He and police chief William Bratton famously cracked down first on quality of life crimes like panhandling and public urination. Teenagers who leaped over the turnstiles at subway entrances were arrested -- a departure from the practice under Mayor David Dinkins. Giuliani later quipped that the police under his predecessor had become "highly skilled observers of crime." Those turnstile jumpers turned out to possess a huge number of illegal guns, which were confiscated, and criminals throughout the city discovered that the New York police were breathing down their necks. The number of murders dropped from 1,960 in Dinkins's final year in office to 640 in Giuliani's last year. The overall crime rate dropped 64 percent, to levels not seen since the 1960s.

Giuliani accomplished this in the teeth of a genuinely ferocious assault from liberals, so-called "civil rights" figures like Al Sharpton (with whom Giuliani declined to meet), the New York Civil Liberties Union and the New York Times. Actors and artists protested in the streets, and leading chin pullers in national magazines pronounced themselves troubled by Giuliani's "tactics." He was steadfast -- and the greatest beneficiaries were poor New Yorkers who lived in formerly dangerous neighborhoods.

Though he inherited a budget deficit, Giuliani declined to raise taxes on New Yorkers nearly bled white. He closed the budget gap with a combination of spending reductions (what a concept!) and modest tax cuts. Business boomed.

Giuliani attacked another sacred cow when he ended "open admissions" and remedial courses at the City University of New York. He was called lots of names by the usual suspects for this principled move. The result was to revive the university -- SAT scores of incoming students rose 168 points.

New York's welfare system was among the most bloated in the nation. Giuliani first culled the ranks for cheats and frauds -- eliminating 20 percent of the caseload. The mayor then introduced a workfare requirement -- able-bodied adults would be expected to do 20 hours of work in municipal offices in exchange for a welfare check. There were howls from the New York Times. The mayor was undeterred. Giuliani transformed welfare offices from check distribution centers into employment offices, where welfare workers coached clients on how to read the classifieds, how to dress for interviews and how to prepare a resume.

His approach toward the homeless was similar. Those who were able to work were encouraged to do so. Those who rejected an offer of shelter and insisted upon blocking public spaces and harassing passersby were issued summonses. For this Hillary Clinton lectured the mayor that Jesus was a homeless person.

There is no question that Giuliani's position on abortion and gun control will offend many Republicans. But let's be clear, he is no liberal. His conservatism has been tempered in New York City -- so it is steely indeed.