State of the Union: Demoralized 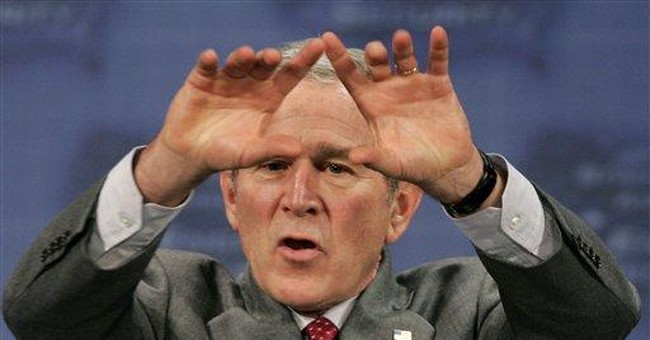 The key paragraph in President Bush's State of the Union speech was this:

This is not the fight we entered in Iraq, but it is the fight we're in. Every one of us wishes this war were over and won. Yet it would not be like us to leave our promises unkept, our friends abandoned, and our own security at risk. Ladies and gentlemen: On this day, at this hour, it is still within our power to shape the outcome of this battle. Let us find our resolve, and turn events toward victory.

The Republicans in the room rose to their feet and applauded. The majority party members remained planted in their seats. So there it is, stark and unmistakable, the Democrats do not wish to win in Iraq and will do nothing to further the cause of victory. As Speaker Nancy Pelosi said upon taking the gavel, "Iraq is not a war to be won but a situation to be managed."

The word victory does not move Democrats (nor a small but significant contingent of Republicans). We are a long way from Winston Churchill in 1940, who said this to his countrymen:

We have before us an ordeal of the most grievous kind. We have before us many, many long months of struggle and of suffering. You ask, what is our policy? I will say: It is to wage war, by sea, land and air, with all our might and with all the strength that God can give us; to wage war against a monstrous tyranny, never surpassed in the dark, lamentable catalogue of human crime. That is our policy. You ask, what is our aim? I can answer in one word: Victory -- victory -- at all costs, victory, in spite of all terror, victory, however long and hard the road may be; for without victory, there is no survival.

Yes, the world was very different in 1940, and both Britain and the U.S. had reason to believe that their very survival and the survival of Western Civilization were at stake in the struggle. Americans justifiably do not see the Iraq War in those terms. But that does not mean that failure is cost-free.

In the wake of our victory in the Cold War, liberals were giddy. How were we going to spend the delectable "peace dividend"? By how much could we reduce our bloated armed forces? Throughout American history, some have always imagined that we could afford to disarm without fear of the consequences. After the Cold War, many liberals, eager to shed the responsibilities of world leadership, accused conservatives of "inventing" new enemies simply to sustain the military-industrial complex. This is one fundamental difference between liberals and conservatives: The latter fear dark forces outside our borders, the former fear dark forces within our borders.

After 9/11 we had a brief infusion of backbone. Afghanistan was liberated, Pakistan tamed, Libya intimidated and al Qaeda scattered. But when Iraq proved difficult, the voices of retreat and failure gained momentum.

President Bush limned the consequences of failure in Iraq -- radical Islamists in command of a key nation in the Middle East with one of the largest oil reserves on the planet, our friends forsaken and our enemies emboldened. But the mood of America today is demoralized. Instead of seeking creative ways to salvage a difficult situation -- the way GIs conquered the hedgerows at Normandy -- the U.S. Congress seems resigned to defeat. The Democrats are voting for a resolution to condemn the "surge" of forces into Iraq, calling it an "escalation" to conjure the ghost of Vietnam.

This defeatism on the part of the Democrats and some Republicans is one of the reasons our task in Iraq is so difficult. Can a divided and demoralized nation win abroad? Don't the Islamists and the communist Chinese and the mullahs of Iran notice America's sunken chest? Is it an accident that China chose this moment to show off its satellite-killing capability?

Drawing the lessons from our 20th-century confrontation with totalitarian menaces, Ronald Reagan counseled that weakness is provocative. That insight is eternal. Today, America has the economic and military capacity to lead the world -- but our psychological fitness for the part is in serious doubt. There is no end to the malevolent forces who will be eager to fill the role if we decline it -- and we will find a world dominated by them far more horrifying than anything we face in Iraq.

Democratic Strategists Acknowledge Grim Reality: Kamala Harris May 'Do More Harm Than Good'
Townhall
Is THIS why the DC mayor's new mask order didn't start until Saturday morning?
Twitchy
Texas Democrats Finally Begin to Realize They Are Screwed
Redstate
The Day the Petty Tyranny of Nancy Pelosi Was Brought Down
PJ Media