Are We Doing Everything to Win? 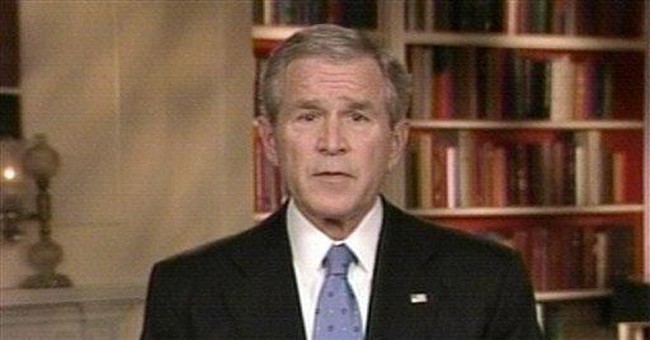 A White House official involved in developing policy on Iraq tells me that the Bush administration is unanimous on one subject, namely, that defeat in Iraq would be a catastrophe for the United States. So far, so good. (The Democrats do not agree, but more on that in a moment.)

As we saw in the president's Wednesday night speech, he is now prepared, as he was not before, to re-evaluate his strategy and to change course. Whereas the president's position had been that a "light footprint" was the way to go in Iraq, and that more troops would not help to solve an essentially political problem, he has changed his mind. He now emphasizes the need for security in Baghdad as the prerequisite to any other progress.

This shift has been a long time coming, and much of the credit for changing the president's mind goes to Gen. Jack Keane and Frederick Kagan of the American Enterprise Institute.

But will 21,000 new troops be enough to do the job? Keane and Kagan had proposed a minimum of 30,000. If the president is correct (and I think it is indisputable) that failure in Iraq would permit "radical Islamic extremists to grow in strength and gain new recruits," permit Iran to pursue nuclear weapons, allow Islamists to topple moderate governments and funnel oil wealth to terrorists for attacks against American targets, then why is the surge so modest? If that much is at stake for us, why only five brigades?

The United States currently has about half a million men under arms, as well as 700,000 National Guard and Army reservists. While our troops in Iraq are being asked to do multiple tours, we have 119,000 troops sitting in Europe. Does anyone think the Soviets are about to roll through the Fulda Gap? There may be good reasons to keep an American presence in Europe -- though I can't think of any offhand -- but is there any foreign policy goal that supersedes the need to stabilize Iraq?

Early reports suggest that in the wake of the president's speech, Maliki has withdrawn his protection from the Sadrists. That's a good sign. So are the new rules of engagement that will permit U.S. forces to enter any and all neighborhoods in Baghdad in search of bad guys. But to succeed, Maliki must also work to train (with U.S. assistance) a minimally competent police force, drastically reduce corruption in the ministries and arrange a fair distribution of oil revenues to all of Iraq's groups and regions. Will he do so? Unclear.

And what if he doesn't? As John Derbyshire of National Review Online observes, "We seem to be saying to the Maliki government: 'Hey, you guys better step up to your responsibilities, or else we're outta here.' This, a few sentences after saying that we can't leave the place without a victory."

The other reason to sleep poorly at night is that the president's plan has an impossibly short time frame on it. In an ideal world, both parties would recognize the disastrous results of a defeat in Iraq and would signal our resolve to win. But the Democrats (and some Republicans) are all too comfortable with failure. Leading Democrats like the speaker of the House and potential presidential candidates are indicating that if they take the White House, American withdrawal from Iraq is a certainty.

Our enemies watch CNN and read The New York Times. Perhaps they've noticed how eager Democrats are to cast the president's decision as an "escalation" rather than a surge. They like the word escalation because it conjures Vietnam. Vietnam is the Democrats' alpha and omega. It's the war we lost (thanks in part to them), and they seem to want to return to the scene of the crime.

The president has freed himself from some of the rigidity that characterized his conduct of the war. The Democrats, unfortunately, are stuck in theirs.