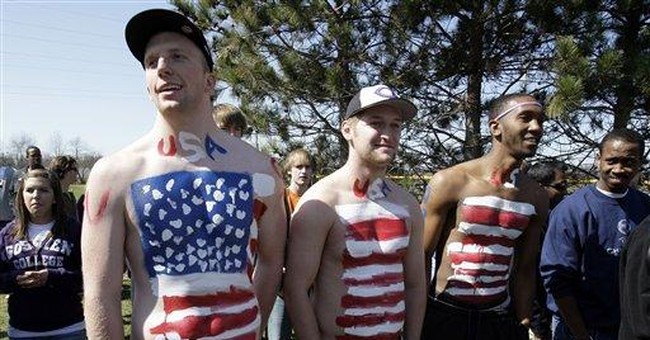 Several students at a high school in California wore tee-shirts with American flags on them during Cinco de Mayo day and a vice-principal ordered them to turn the shirts inside out, remove them or make the walk of shame to the principal’s office.

As the boys’ story was starting to make national news, an extraordinary thing occurred. A couple hundred kids took to the streets and marched through the Bay Area city in protest.

When I first saw the headline about the protest, I thought it was kind of admirable that fellow high school students would take to the streets in support of the American flag-wearing kids. Since the school dress code didn’t ban the wearing of such a shirt, clearly the vice-principal (who is Hispanic) overreacted in a ridiculous way.

But then I read a little further down the page. These protesters weren’t young people marching in support of the First Amendment or objecting to the outrageous behavior of an over-zealous vice-principal. They were mostly Hispanic kids who were protesting the young men wearing the American flag tee-shirts!

It has come to this.

Many activists and antagonists who are on the wrong side of an issue employ the tactic of, “the best defense is a good offense.” I often debate liberals on Fox News Channel who tend to start yelling and attacking when they run out of facts or common sense. I suppose these folks figure if they bow up and get in our faces, we’ll just back down and see the world their way.

It must be the same with the contentious national conversation we’re having about illegal immigration. When Arizona boldly and bravely decided to tackle the illegal immigration crisis by enacting legislation that gives cops the right to enforce the already-existing immigration laws, liberals scream and howl and act as if the U.S. Constitution was being shredded before their very eyes. People in leadership positions - like Cardinal Roger Mahoney - have said ugly and terrible things about the new Arizona law. Even loudmouth NBA stars are getting in on the act. Canadian point guard Steve Nash, a talented basketball player with an obnoxious liberal streak off the court, is now lecturing us about what it means to be a good American. Again, please note Mr. Nash’s country of origin.

The world is upside down these days. Right is portrayed as wrong, laws are apparently meant to be ignored or ridiculed, and a few teenage boys get in hot water for daring to wear an American flag on their shirts on Cinco de Mayo.

And then, around 200 kids have to audacity to take to the streets demanding respect.

Perhaps they haven’t seen the news reports about the damage done to Santa Cruz businesses by stampeding, crazed pro-illegal protesters, or the people being hauled off to jail for breaking the law during demonstrations, or the pictures of riot police in communities around the country attempting to keep the peace.

Start with recognizing that there are millions of Americans who are fed up with rampant illegal immigration.

Appreciate how Arizona lawmakers are listening to their constituents and doing what they can to pick up the pieces of a broken, failed, federal system that sees millions pour across our borders and fails to allow anything to be done about them once they are here.

Recognize once and for all that illegal immigration is an explosive, powerful issue that is uniting Americans who will go to the polls and cast out wimpy politicians who don’t have the guts to defend the sovereignty of the United States of America.

Respect? The people supporting illegals don’t know the meaning of the word.

I’m so glad to hear that the families of the boys who wore the American flag tee-shirts to school have no intention of apologizing. They have nothing to apologize for.

The apology needs to start coming from the lawless, reckless, irresponsible voices in our country who are blindly defending illegal immigration and attacking any and all who dare to stand up for the rule of law.

But don’t hold your breath.

These angry activists have no intention of backing down. And their protests will become louder and angrier as their side faces the reality of the situation, as they get closer to realizing the truth -- that it is wrong to defend the indefensible.

Our only hope is with the elected officials and the judges who decide these things. And if politicians don’t get it right, we’ll find the ones who will.