Iowa Is No Florida 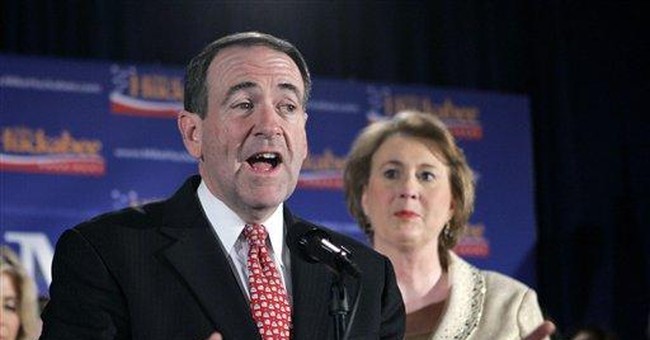 Isn’t the love/hate relationship that Republicans are having with Gov. Mike Huckabee fascinating?

Conservative pundits don’t seem content to express a degree of being uncomfortable with the GOP Iowa caucus winner. They’re simply trashing him. Some of the vitriol I’ve seen and heard is the type of stuff we professional blowhards usually reserve for liberal extremists like Hillary or Nancy Pelosi.

But in Iowa, it obviously didn’t stick. Iowans rejected the claims that Huckabee is a “RINO” (Republican-in-name-only), a tax-loving, pro-illegal immigrant, big government kind of guy and gave him a relatively easy Iowa win, a victory that came after weeks and weeks of polls showing Gov. Mitt Romney benefiting from the tons of money he spent there.

The story of a candidate who was outspent in a key race by about 20 to 1 surging to victory is an impressive one. And Gov. Huckabee and his staff and volunteers are to be congratulated for the Iowa win.

But to put it simply: Iowa ain’t Florida.

Our media-driven fascination with the Iowa caucuses is well established, but deceptive. Year after year, we’ve seen candidates take Iowa and fail to capture the presidential nomination.

I don’t say that to throw a wet blanket on the Huckabee victory. It’s just a fact that bears repeating in the midst of the news media hyperventilating over Iowa.

Mayor Rudy Giuliani barely scored any votes at all in Iowa but seems perfectly content to focus on Florida and Texas (and yes, New Hampshire) with a sort of confidence that a presidential nominee needs to have.

And like many other issues, I think Rudy “gets it.”

Early on, the Giuliani camp saw that Iowa was going to be a Romney/Huckabee story for Republicans. And it was. Giuliani has a political instinct well suited for this nationwide race and I believe he’s going to do quite well, well enough to secure the nomination.

But then again, I’m just a pundit with an opinion, the type of opinion that a bunch of Mitt Romney supporters saw fall apart in Iowa.

It’s hard to tell why so many Republican voices, outside of Iowa, seem to despise Mike Huckabee. Frankly, many of them sound positively afraid of him.

I can’t tell if it’s because they truly believe he’s a liberal, tax and spend Dem in a Republican’s clothing or there is something else going on here.

But watching him on Jay Leno’s “Tonight Show” the other night gave me some insight into what so many might be worried about.

Leno asked Gov. Huckabee about his past career as a Baptist minister and his transition to politics. Huckabee replied that he felt it was time to “get out of the stands” and go to work on behalf of the poor and disadvantaged.

So the ministry is a job “in the stands?” Preaching the gospel and saving souls is something one does from the sidelines? And to REALLY get in the game, one becomes a governmental public servant?

Perhaps the reason so many are worried about Mike Huckabee’s current popularity is because he’s actually a guy who believes that the solution to all of our woes is the government, not churches or charities. On Jay Leno’s show, he gave us a glimpse into who he truly is, a guy who leaves the ministry (“the stands”) and wants to be part of the government because he feels that government is the answer to everything.

Time will tell whether Americans will figure that out or not.

But in the meantime, remember how unique Iowa really is.

One tiny state does not a president make.