Vitter is no different than Craig 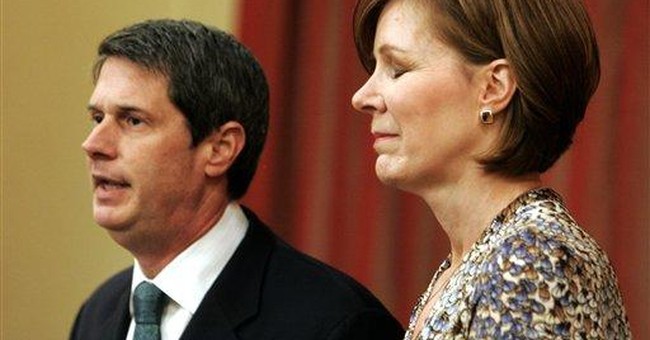 As a Republican, it would be somewhat satisfying to believe that hypocrisy in politics is practiced exclusively by Democrats. Most of us conservative pundits spend plenty of time in print and on-air showcasing example after example of hypocritical Democrats and their latest antics.

Sadly, the sordid tale of Sen. Larry Craig is a grim reminder that there’s no shortage of Republican hypocrisy, either.

In moral terms, it’s impossible to distinguish between the scandals of Larry Craig and Sen. David Vitter, a Republican from Louisiana. As everyone knows by now, Sen. Craig’s downfall was the alleged game of footsy he played with an undercover police officer in a men’s restroom.

But Sen. Vitter’s transgressions are equally immoral, totally illegal, and entirely reprehensible. After his phone number appeared in the phone records of the infamous “D.C. Madam”, a high-priced prostitution ring, Vitter professed regret, shame, and remorse and returned to the well of the Senate to a thunderous ovation.

What am I missing here?

Vitter’s supporters claim that his case is different from Craig’s for a variety of reasons. He admitted what he did, they reason. He accepted responsibility for his actions.

So does that mean if Sen. Larry Craig had admitted having happy feet in a filthy bathroom and said he was sorry, that his colleagues would have given him a standing ovation and he’d be allowed to keep his job?

Forget trying to make comparisons between homosexual and heterosexual scandals. While plenty of people find trying to pick up another man in a bathroom a lot worse than paying for sex from a high-priced hooker, what should matter to the GOP is doing the right thing.

Instead of trying to rank either scandal on some kind of David Letterman-type Top Ten list, I’ve got to believe that in our hearts, we know that both men did wrong.

It’s just that the Republican Party has had wildly differing responses to the two senators’ cases.

So why is that?

The answer, it seems, is nothing short of pure, partisan political fanny-covering.

If Sen. Craig resigns, as expected, the Republican governor of Idaho will appoint another Republican. If Sen. Vitter would have resigned, something that doesn’t seem to be in the cards, the governor of Louisiana, a Democrat, would have appointed a Democrat.

Once more, politics trumps moral conviction. But this time, the absence of morality is coming from the party of Bush, Thompson, and Romney, not Kennedy, Feinstein or Frank.

Political gamesmanship at the expense of moral clarity is what frustrates so many Americans today. If the GOP wants to declare itself to be the party of virtues and values, it should act like it. David Vitter evidently broke the law and cavorted with prostitutes and then got caught. The fact that he didn’t plead guilty in a court of law doesn’t make his actions any less illegal, and certainly no less immoral, than what Larry Craig did.

Cheering for Sen. Vitter was a shameful thing for Republicans to do and perhaps might sum up what’s wrong with the GOP today.

Until David Vitter meets the same political fate as Larry Craig, we’re no better than the Democrats.

Barack Obama Tweeted 'One of The Worst Tweets in History' Over Uvalde School Shooting
Rebecca Downs
Does Joe Biden's Gun Control Push Have a Chance? With These Republicans...Maybe.
Matt Vespa