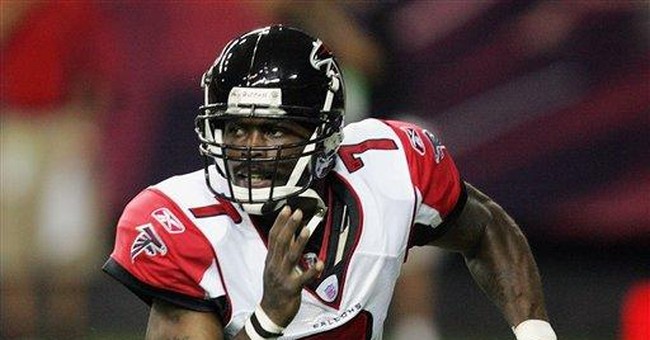 I am so sick of the stench of political correctness I could just heave.

The pathetic pendulum of our fickle culture has swung so far into absurdity that I’m not sure we can ever be normal or reasonable again.

The “Michael Vick, Mad Dogfighting Gambler” has exploded into a good old fashioned media firestorm. And probably for good reason. Any of us who appreciate the companionship and unconditional love of a dog or cat cringe at the act of forcing pit bull dogs into a ring so they can tear each other to shreds, all for the enjoyment of some sadistic cretins. And if it’s true that Vick drowned, hanged, or brutally killed innocent animals, I hope he spends plenty of time in the slammer.

But this story has sparked some bizarre sidebar stories that remind us that our country is crazier than ever.

Let’s not even touch the debate over whether or not Vick should be suspended from the NFL prior to a trial on the federal charges. I’m afraid that if I venture into the “innocent-until-proven-guilty” territory, I’ll have every dog lover in America howling for my scalp.

But the outrage over some remarks made by a Pittsburgh newspaper reporter the other day have me really steamed. And I don’t care who minds what I’m about to say.

Paul Zeise, a sports reporter for the Pittsburgh Post-Gazette, was a guest on a local TV sports talk show which airs Sunday nights on KDKA-TV. When the subject of Vick and the dog abuse charges came up, Zeise disagreed with another panelist who felt that Vick should be suspended for the rest of the season. Zeise said, “It’s really a sad day in this country when somehow…Michael Vick would have been better off raping a woman if you look at the outcry of what happened. Had he done that, he probably would have been suspended for four games and he’d be back on the field.”

Now any reasonable, fair-minded person can completely understand the point that he was making. Considering the horrible behavior that a number of pro athletes have exhibited against fellow human beings, the hysteria over Vick’s alleged behavior seems, at the very least, a bit over the top.

But we don’t have much reasonableness in 2007 America.

What do you suppose the headlines said about Zeise’s comments? “Sportswriter Complains About Inequitable Scandals”, maybe? Or “Paul Zeise Believes There’s An Overreaction to the Michael Vick Story?”

No, that’s not the way this one played out.

No one, repeat, no one thinks this guy wants Michael Vick to go around raping women. But evidently, his newspaper and TV employers are so spineless that they figured they’d better go into damage control immediately.

KDKA took the extraordinary step of apologizing for Zeise on it’s evening newscasts and assured viewers that he will not be invited back to the sports show.

The Pittsburgh Post-Gazette issued a statement, too, saying Zeise’s “insensitive and offensive” remarks “do not represent the view of the Post-Gazette.”

In other words, everyone is pretending to fail to understand the perfectly reasonable observation he was making about the wildly inconsistent world of sports and alleged crimes.

Don’t believe me? How about Kobe Bryant, does he ring any bells?

He’s the NBA superstar who was accused of raping a young woman in a hotel room, remember? Were there any demands for his suspension from the hardwood while the charges were pending or he approached his trial?

Evidently not. As I recall, he flew back and forth from his games to the actual trial. Man, that must have been tiring, all that tenseness about coordinating his hectic NBA schedule with his RAPE TRIAL!

Ultimately, Bryant was exonerated. Pretty hard to get a conviction when the accuser willingly goes up to a hotel room of a basketball player in the middle of the night.

But Michael Vick hasn’t been convicted yet, either.

And yet, the media and general public seem to have tried him, found him guilty, and hanged him at sunrise.

I’m just curious about something. In the scheme of things, what’s a more egregious offense: rape or dog fighting?

It’s probably just a matter of time before Paul Zeise gets sacked for expressing his opinion about the Michael Vick case. And that just stinks.

When an alleged rapist can play basketball without missing a beat but an alleged dog abuser is expected to immediately end his career, there’s something wrong. And when a sportswriter is turned into a monster because he simply complains about that kind of wrongness, that’s absurd.