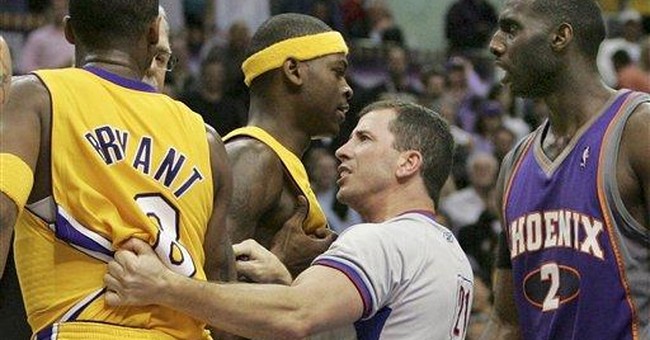 In the talk radio business, we all pretty much follow a similar formula for deciding what gets covered on our respective shows. We scour the news, search the internet, collect suggested stories from our producers, and even include various life experiences before deciding what should be discussed during our on-air shifts.

For me, the constant determining factor is whether or not a story or topic is relevant to the average listener. In fact, I picture a typical news/talk fan in my mind -- say, a 40 year old man or woman, actively involved in their community, usually well-informed and politically savvy -- before deciding whether or not to cover a story on my daily national radio show.

The story of the NBA referee who is alleged to have gambled on games he officiated is such a story.

At first glance, this appears to be a sports story. And since I’m not a sports talk show host (there are plenty of them), I tend to avoid sports stories.

But this really is a much bigger event than just another headache in the NBA. This is a morality tale, a time when, not unlike the magical Don McLean song that laments “the day the music died”, this is a story that has shattered the last vestiges of innocence and trust in the sports world.

It’s the day that a professional sports official is said to have cheated.

We’ve watched the steady decline of behavior by supposed role models in professional sports for years now. Maybe it started with Pete Rose and his gambling scandal. Perhaps it was when we were first exposed to the performance-enhancing drug use by so many athletes.

We winced when we watched our superstar athletes give the middle finger to booing fans or throw a chair into the stands and break a woman’s nose or we heard about off-field and off-court sexual and criminal antics by men behaving like drunken frat boys instead of respected multi-millionaires.

Through it all, it felt like we just had to endure the actions of the players, maybe realizing that it can’t be easy for a young, tough athletic warrior to be handed the keys to the kingdom because he could run, hit, or catch a ball better than most everybody else.

It’s not difficult to imagine what many of these thug athletes would be doing if they weren’t so talented at their respective sport. A third shift at Wendy’s or a middle level manager at a car wash comes to mind.

But we love our baseball, basketball, and football. So we shrug it all off and keep watching the games, expecting the next great catch or our team to win the next world championship.

And we certainly know how big money is at the center of everything in the world of professional (and big-time college) sports. We watch billion dollar stadiums being built, we pay a couple of hundred dollars to take our family to a ballgame and buy a hot dog, we pay for the premium sports channels on satellite TV.

So we’re jaded. We know many of the stars are spoiled brats and the owners are greedy pigs. Any illusion of innocence or wide-eyed appreciation for so many pro sports personalities was shattered a long time ago.

But through it all, and perhaps not even realizing it, we could count on one last, comforting belief: the officials never cheat.

Oh, they’d miss plenty of calls. From that poor American League umpire who blew the not-even-so-close play at first base that cost the St. Louis Cardinals in the post-season to the hapless NFL official who appeared to botch the pre-game coin toss, we’ve seen all kinds of mistakes made by the men in blue or striped shirts.

But we never, ever thought they cheated.

We yell at them, boo them, question their eyesight and/or their IQ, and sit in our ivory tower cheap seats with the perfect vantage point and wonder why anyone could possibly want to be a referee.

But not for a moment did we ever suspect that any of them could cheat.

A cheating sports official could get away with murder. More than controlling the outcome of a game, he could call just enough fouls or whistle few enough infractions to cover “the spread” or the “over/under.” And since no one can really get in their head, it’d be impossible to prove it.

Unless someone turns one of them in.

Evidently, that’s what happened to NBA official Tim Donaghy. News reports are suggesting that he was in so deep to the mob that he was betting -- and likely cheating -- on games he officiated.

No one knows as well as sports officials the deadly, career-ending consequences of betting on games. So if the allegations are true, Mr. Donaghy had to be living in constant fear for his life, not to mention the overwhelming dread of committing the unspeakable mortal sin in all of professional athletics. I suppose it’ll all be sorted out and eventually we’ll move on.

But this is not just a sports story. It’s a nagging reminder that absolutely nothing is safe from corruption anymore.

It’s a story that reflects our cynical, bitter world full of disappointment and contempt for decency.

I guess it’s possible that not even the referees are immune from the plummeting decline of values and goodness and integrity.

And that makes me incredibly sad.

Maybe the allegations against Tim Donaghy aren’t true. I hope not.

But like the innocent child who hears a dirty joke or sees an act of cruelty for the first time, the damage has been done.

The simplicity and beauty of an occupation free from corruption is gone forever.