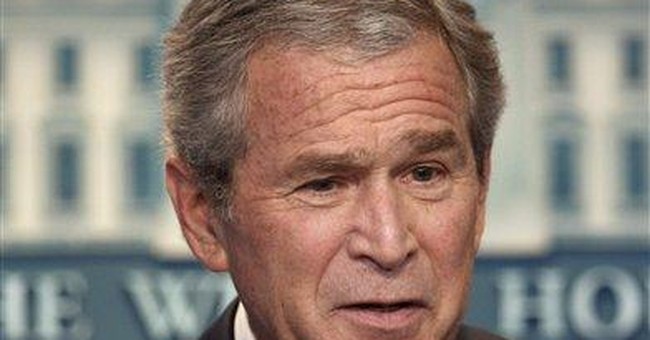 Watching a steady stream of Democrats like Harry Reid, Dick Durbin, and Chuck Schumer each take their turn delightedly pummeling President Bush over the war in Iraq today, I couldn’t help but think of fellow conservatives who are starting to give aid and comfort to these Democrat Party loyal oppositionists.

According to Byron York of the National Review, the Republican Party base has simply decided to throw Mr. Bush under the wheels of the bus. Since so many of us disagree with him on things like illegal immigration and Scooter Libby, York opines that a whole bunch of Republican loyalists are practically counting the days until Jan. 20, 2009, when a new commander-in-chief takes up residence at 1600 Pennsylvania Ave.

Other conservative voices are jumping on the Bush-bashing bandwagon. The other night on Fox News, I saw a radio host proclaim that the president’s soft stance on illegals has cost him support for the war in Iraq.

Just what, precisely, is the point?

Look, I’m as disappointed in this administration’s attempted amnesty for illegals as anyone. But I looked President Bush in the eye in the Oval Office and saw a man who truly believes in his heart that giving illegals a “path to citizenship” is the right thing to do.

I believe he’s wrong. But I know that this good and decent man believes he’s right.

So because of this issue, I’m supposed to abandon my president?

I’m expected to go on radio and TV and give miserable attack dogs like Dick Durbin more ways to say, “See -- even Republican supporters of Bush are defecting!”?

From the day the bombs started dropping on Baghdad, President Bush kept telling us that nothing about this war would be easy. Our nation has never attempted something as bold as installing democracy in this troubled part of the world and attempting to make a country like Iraq stable enough so that they can handle their own terrorists without our intervention.

Simply put, the vast majority of Americans supported our country’s pre-emptive strike. The longer this battle rages, the more we see impatient Americans start complaining. I guess that’s what a society in a Tivo/Iphone era does.

And I certainly expect that from Democrats who blame George W. Bush for everything from hurricanes to health care.

But I think it takes some guts to stand behind a president who is doing what he believes to be right, even in the face of enormous opposition.

Liberals are emboldened by Republican-fueled criticism. And if good folks like Byron York aren’t careful, we’ll be handing over the White House on a silver platter to Hillary or Barack. After all, just how far can Rudy Giuliani, Mitt Romney or Fred Thompson distance themselves from the Bush Administration?

Besides, who really wants to be on the same side of the political fence as Harry Reid, Ted Kennedy…or Betty Williams?

Betty Williams won the Nobel Peace Prize in 1976 for creating a group that helped initiate peace talks in Northern Ireland. This week, she was the keynote speaker at The International Women’s Peace Conference in Dallas. According to the Dallas Morning News, during her speech she told the thousand or so attendees, “Right now, I could kill George Bush.” The paper said she went on to demand his impeachment since “the Muslim world right now is suffering beyond belief” as a result of this administration’s foreign policy.

What a woman of peace. That’s some “peace conference.”

I’m not sure what would happen if an American traveled to Northern Ireland and expressed a desire to kill Mary McAleese, the current President of Ireland. I doubt that such an opinion would be met with cheers and a standing ovation, as was reported had occurred when the Nobel laureate said what she said in Dallas.

And when we tracked Betty Williams down and put her on my radio show, I was shocked to hear her claim that any published report that quoted her as saying, “Right now, I could kill George Bush” was lying. I reminded her that according to numerous published reports, she used the exact same phrase in a July 24, 2006 speech to schoolchildren at the Brisbane City Hall. At that point in the interview, she sounded totally defeated and said she not only “regretted” saying it, when I asked her if she was sorry for saying it, she said she was. In fact, the Dallas Morning News sent me the audio of the speech which confirms their reporting of Ms. Williams comments about the president.

You can hear my interview with this awful woman at www.mikeonline.com.

People like Betty Williams and Michael Moore and Nancy Pelosi and Keith Olbermann and so many others on the left have made it quite clear what they think of George W. Bush. They teem with hatred and contempt.

They sure don’t need to get any assistance from us. Now, more than ever, we ought to stand behind President Bush.

But if people on the left OR right don’t want to support him these days, I have a heartfelt reminder: November of 2008 will be here soon enough.

Until then, how about getting off the president’s back?