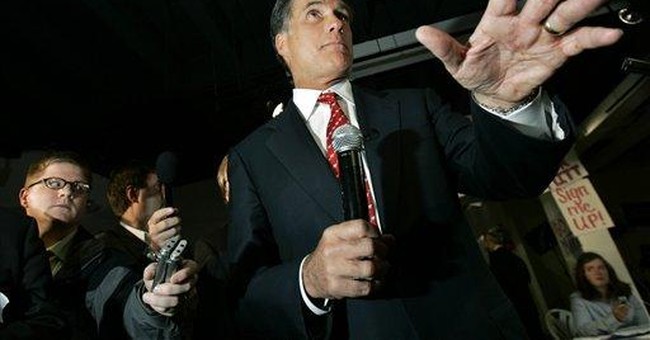 I never enjoy arguing or disagreeing with fellow conservatives, especially someone as smart and likeable as Hugh Hewitt. I figure I’ve got my hands full enough by sparring with pesky liberals than to find fault with a like-minded colleague.

So being called a “bigot” by Hugh the other day made for a particularly bad day.

Allow me to explain how in the world this could have possibly occurred.

The issue of a Mormon in the White House is one of those sensitive issues that many Americans don’t really want to openly address. Sure, Hugh has written a terrific book on the subject, but he’s an enthusiastic and energetic Mitt Romney supporter, so it’s a bit tricky to accept the book as an objective analysis of the prospect of the former Massachusetts governor ever occupying the Oval Office.

But what really prompted me to dive into discussions about the prospects of a Mormon being elected president was reading an article in Time Magazine referring to the accusation that if anyone is reluctant to vote for Gov. Romney because of his religious beliefs, that reluctance is religious bigotry.

In fact, the article reported that it’s none other than Hugh Hewitt making that claim.

So I thought it would be very productive to invite Hugh on my radio show in order to have a productive conversation about this complicated issue.

I like Mitt Romney. He’s obviously a smart, talented, decent man with the kinds of values and ideology that most mainstream conservatives can appreciate.

But for someone to suggest that in this Judeo-Christian nation of ours, a presidential candidate’s religious beliefs are only being debated or considered by intolerant religious bigots is the type of tactic that is typically employed by the truly intolerant far left.

As we learn more and more about Mormonism, we are forced to confront the fact that the church clearly has some peculiar and unusual beliefs. If the belief that the Garden of Eden is in Jackson County, Missouri doesn’t get your interest, how about the conviction that people will be gods and goddesses of their own planets in the hereafter? Or the sacred undergarments many Mormons wear, believing in some kind of protection against spiritual or physical harm? And more importantly, how about their belief that God is a person of the flesh and that the Bible needed to be altered and updated by a man named Joseph Smith who was visited by an angel named Moroni in the early 1800’s?

Listen, I believe strongly in respecting other people’s faiths and beliefs. And every Mormon I’ve ever met is a kind, decent, loving person with terrific dedication to family and country. Certainly there are people who think we mainstream Christians have some strange beliefs, too.

But if a presidential candidate has a set of religious beliefs that seem contrary to the vast majority of Bible-believing Christians and those beliefs might cause someone to decide not to vote for that person, how can that possibly be called bigotry?

Hugh attempts to make a compelling case. He argues that Americans need to substitute “Jew” or “Catholic” for Mormon. And he uses the slippery slope argument, that if someone is disqualifying someone because of their Mormon faith, how long before mainstream Christians are next?

But where that position totally and completely breaks down is when you ask Hugh to substitute the word “atheist” for Mormon. During our conversation the other day, it was pretty apparent that Hugh would have no intention of ever voting for someone who doesn’t believe in “a deity.”

Hmmm. So Hugh Hewitt tells me that I’m being intolerant and even bigoted for suggesting that someone with religious beliefs other than my own might not get my vote for president, but its perfectly okay for him to disqualify someone for being an atheist?

So much for tolerance, I guess.

There’s nothing wrong with believing that a candidate who wants to become the leader of our country should have the same kind of religious beliefs that most Americans have. We should be allowed to disagree with a political candidate for just about any doggone reason we want to, and even be able to stand up on a soapbox and proclaim our reasons in this free country of ours without being afraid of being labeled a racist or a bigot or a hatemonger.

Over and over again in the illegal immigration debate, pro-illegals like to call the other side anti-Hispanic bigots and Mexican-hating racists. Of course, we know in our hearts that we object to the illegal actions of immigrants, not to their country of origin.

It’s bad enough to be called those names by lefties. It’s really difficult to hear that kind of stuff from another conservative.